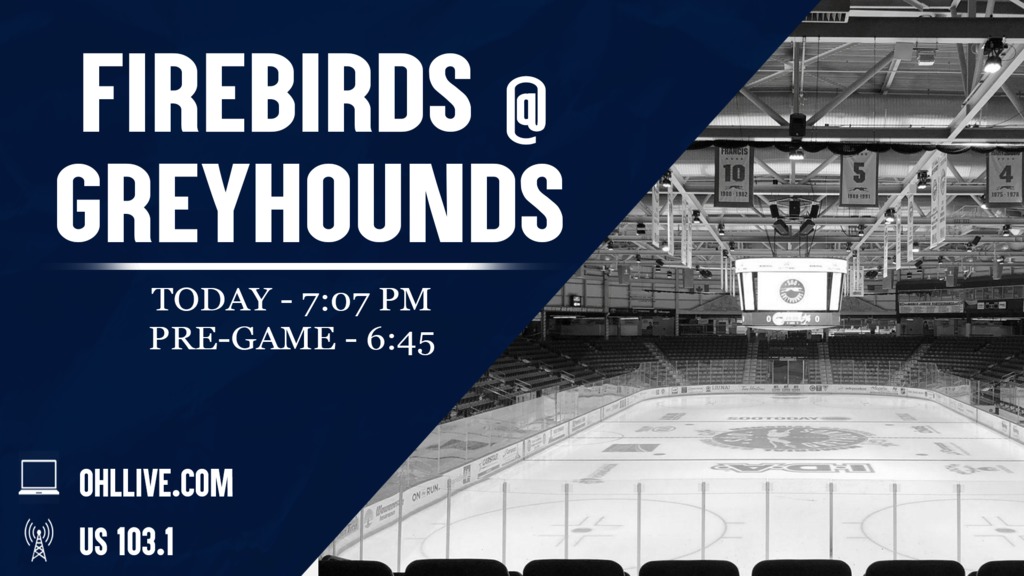 Flint, Mich. – The Flint Firebirds narrowly defeated the Sault Ste. Marie Greyhounds last Friday by a final score of 5-4 at the Dort Financial Center. Some bad blood from last season’s Western Conference Semifinals reappeared as the game became increasingly chippy. This rivalry reunites tonight in the Soo. Puck drop is set for 7:07 p.m. (ET) at the GFL Memorial Gardens.

Flint enters the contest with a record of 9-7-1-1, seeding them fourth in the West Division. The Greyhounds rank fifth in the West with a mark of 5-7-4-2. Tonight marks the third of six games between these clubs the season, and the second of three to be played at GFL Memorial Gardens. All-time, the Firebirds hold a record of 16-18-1-2 versus Sault Sault Marie and have gone 8-9-0-1 on the road in the series. Last year, these clubs met in the second round of the OHL Playoffs and the Firebirds won the best-of-seven series in five games.

In the first of two previous meetings this season, the Birds emerged victorious by a final score of 5-3 on October 5 in Sault Ste. Marie. Riley Piercey topped the stats with a goal and an assist, and defender Dmitry Kuzmin (Winnipeg Jets) chipped in a pair of helpers in the victory. Last Friday night in Flint, the Firebirds shot out to an early lead before Braeden Kressler (Toronto Maple Leafs) broke a late tie with the game-winning tally. Three defensemen scored for Flint, and Will Cranley (St. Louis Blues) picked up his sixth victory with a 29-save performance.

On special teams this year, Flint ranks 11th in the OHL for both power-play (PP) and penalty-kill (PK) efficiencies. They’ve scored on 20.5% of their chances with the man advantage and killed off 79.2% of the penalties they’ve taken. The Greyhounds rank 14th on the PK with a kill rate of 74.4%, and they’re 17th with an 18.1% success rate on the PP.

Riley Piercey is tied with Amadeus Lombardi (Detroit Red Wings) for the lead in points for the Firebirds, each with eight goals and 13 assists through 18 games played. Piercey, who is expected to play his 200th OHL game tonight, has nine points (3 G, 6 A) in the last seven contests. Lombardi rides a three-game points streak (2 G, 2 A) into Wednesday’s tilt. Gavin Hayes (Chicago Blackhawks) holds third place with 17 points (8 G, 9 A).

Braeden Kressler (Toronto Maple Leafs) has contributed 14 points in the ten games he’s played with the Birds this season. He leads the club in goals with nine and has pitched in five helpers.

The defensive unit is led by Dmitry Kuzmin’s 14 points, stemming from two tallies and 12 helpers. He’s tied for the sixth most assists among league defenders. Luca D’Amato ranks third in the entire OHL with a plus/minus rating of +13. Sophomore rearguard Tristan Bertucci has chipped in five points (1 G, 4 A) across the past four games.

The Firebirds will welcome new defender Artem Guryev (San Jose Sharks) to the team tonight. Guryev was the 2nd Round Pick (#22 overall) of the Peterborough Petes in the 2019 OHL Priority Selection. He was drafted in the 5th Round (#135) of the 2021 NHL Draft by the San Jose Sharks. In 60 career OHL games, Guryev has 15 total points (1 G, 14 A) and 127 penalty minutes. He’ll wear jersey number 82 for the Firebirds.

In goal, Flint’s netminders are led by overage veteran Will Cranley (St. Louis Blues), who’s played in 15 games this season. He’s posted a 3.19 goals-against average (GAA), and his .910 save percentage (SV%) is fifth-best in the league. Cranley is credited with six victories. Nathan Day has three wins across six appearances and carries a GAA of 4.95 with a .832 SV%.

Bryce McConnell-Barker (New York Rangers) sits atop the scoresheet for the Hounds, now with 19 points (10 G, 9 A) through 18 games. He carries a six-game point streak into tonight’s tilt, having scored four goals and added three assists in that time. Kalvyn Watson is second with seven goals and eight assists on the season. In third is Tyler Savard with three tallies and ten helpers in only 14 games played. Savard leads the OHL in penalty minutes with 43.

The rearguards for the Soo are led by Kirill Kudryavtsev (Vancouver Canucks) with 12 points (2 G, 10 A) to date. Rookie defender Andrew Gibson is second with three goals and four assists in the campaign.

The Hounds’ starting goaltender is Charlie Schenkel, who has appeared in 11 contests. He has three wins and one shutout this season. Schenkel carries a 3.40 goals-against average (GAA) and a .905 save percentage (SV%). Samuel Ivanov has two victories in nine appearances, posting a 2.89 GAA and an SV% of .901.

This evening’s contest against the Sault Ste. Marie Greyhounds can be heard live on the radio throughout Flint & Mid-Michigan on US 103.1 FM, online at www.us103.com or by downloading the US 103 app here. Jack Sznewajs will call the play-by-play action on the Firebirds Hockey Network (FHN), starting with the pre-game show at 6:45 p.m. (ET).

Next Up: The Firebirds will play back-to-back games versus the London Knights this weekend. First, the clubs will meet at Budweiser Gardens in London, Ont. on Friday night. The rematch on Saturday returns to the Dort Financial Center for a 7:00 p.m. (ET) opening puck drop. Tickets for Saturday’s home contest are available now from ETIX HERE.

Firebirds Defeat Spitfires 4-3 as Day, Slavicek Play Hero in the Shootout
4 hours ago