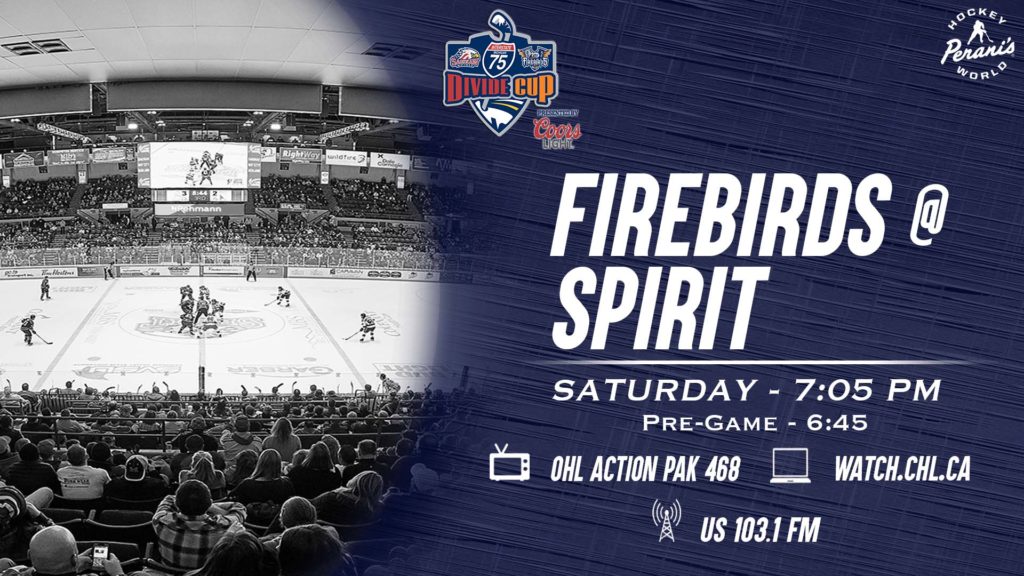 Saginaw, Mich. – The Firebirds are set to play another installment in the I-75 Divide Cup series, presented by Coors Light, Thursday night. Saginaw has the early 3-1 lead through four games, and Flint seeks their first win on the road over the Spirit this year. Puck drop is set for 7:05 p.m. (ET) at the Dow Event Center in Saginaw.

All-time, Flint carries a record of 15-26-0-2 against Saginaw, with a road record of 7-14-0-0. In the shortened 2019-20 season, Saginaw won four of seven meetings. Wednesday marks the fifth of 12 total meetings between the clubs, and the second of six to play in Saginaw. Thus far, the Spirit have won three of four meetings this year. After winning the I-75 Divide Cup their first two seasons in the OHL, Flint has now surrendered the trophy to Saginaw for three straight campaigns. The first team to win seven games in the series this season will win the coveted trophy.

The last time ‘Birds and Spirit met was November 24 in Flint. Game four of the series went to the Firebirds by a final score of 5-3. With the victory, the Firebirds snapped Saginaw’s win streak in Flint at ten games, dating back to the Firebirds’ last home win versus the Spirit in overtime on January 31, 2018. For the Firebirds, Gavin Hayes netted his first two goals of the season. Ethan Hay and Sahil Panwar also lit the lamp, Zacharie Giroux bagged the empty-netter to secure the victory, and Riley Piercey posted two points in the contest (2 A). Matyas Sapovaliv led the way for the Spirit, scoring twice, and Pavel Mintyukov finished with a goal and an assist. Luke Cavallin made 30 saves on 33 shots-faced for his seventh victory of the campaign. Across the ice, Andrew Oke made 26 saves on 30 shots.

On special teams, the Firebirds continue to improve, now having scored at least one power-play goal in seven of their last ten games. Flint ranks 15th on the power play, converting at a 17.3% rate. The Spirit rank 17th with a 14.3% conversion rate. Saginaw boasts the league’s third-best penalty kill, holding their opposition scoreless 85.5% of the time. Flint ranks second in the OHL, killing penalties at an 85.9% clip.

Westland, Michigan native Gavin Hayes has also been hot of late, with six points in his last three games (3 G, 3 A). Flint’s top rookie on the charts is Coulson Pitre with five goals and three assists in 11 games.

In net, Luke Cavallin has appeared in 15 games thus far. He carries a goals-against average (GAA) of 3.40. His save percentage (SV%) is .900. Cavallin has earned eight wins, with one of them being a shutout. Among OHL netminders, Cavallin’s eight wins are tied for sixth-most. Rookie netminder Ian Michelone played two full games and carries a GAA of 4.00 and a SV% of .901 with one win. Nathaniel Day played the final 18 minutes of a road game in Saginaw and turned aside all four shots faced. Day is currently competing in the Capital City Challenge at TD Place in Ottawa.

Josh Bloom (Buffalo Sabres) sits atop the leaderboard for the Spirit with 26 points (15 G, 11 A) through 18 games. His 15 goals are tied for fifth-most in the league, and he currently carries a six-game point streak, having logged eight goals and five assists in that span. Saginaw’s top rookie on the scoresheet is Matyas Sapovaliv, who sits second overall in total points (6 G, 10 A) through 18 contests. His point total is tied for eighth-most among rookies, his 13 assists are tied for sixth-most, and Sapovaliv is also riding a six-game point streak (4 G, 5 A) currently. There is a three-way tie for third in total points for Saginaw. Calumet, Mich. native Dean Loukus and rookie Caleb Mangone each have six tallies and eight helpers. Defenseman Pavel Mintyukov has lit the lamp three times and added 11 assists, and is on a six-game point streak (2 G, 7 A).

Between the pipes, Tristan Lennox (New York Islanders) has appeared in eight games and earned four victories. He carries a 2.67 goals-against average (GAA) and a save-percentage (SV%) of .888. Shelby Township, Mich. native Andrew Oke has played in ten contests, picking up five victories. Oke carries a 4.24 GAA with a SV% of .847. Brett Fullerton has played in one contest, posting a 3.33 GAA and a .850 SV%.

Broadcast Coverage:
Thursday evening’s contest against the Saginaw Spirit can be heard live on the radio throughout Flint & Mid-Michigan on US 103.1 FM, online at www.us103.com, or by downloading the US 103 app here. Jack Sznewajs will call the play-by-play action on the Firebirds Hockey Network (FHN). Pregame coverage will begin prior to puck drop at 6:50 p.m. (ET) Wednesday evening.

The game will also be televised live across the province of Ontario on the OHL Action Pak on channel 468 (4468 HD) for both Rogers TV and Cogeco TV cable subscribers. OHL fans with cable television in Ontario can add the OHL Action Pak to their television plan to catch the Firebirds in action, home or away all season long. Also, all Flint Firebirds’ home and away games throughout the 2021-22 regular season can be watched anywhere in the world online on https://watch.chl.ca/ohl. CHL TV is the league’s new and improved video streaming platform that delivers high-quality live and on-demand coverage of all regular season and playoff games annually. The cost is $6.99 for 24-hour access, $24.99 for monthly access, $109.99 for all-access to the 2021-22 Firebirds and OHL season, or $159.99 for all-access to the entire 2021-22 CHL season.

Next Home Game: The Firebirds return to home ice Wednesday, December 8 to host the Erie Otters. Puck drop is scheduled for 7 p.m. (ET) at the Dort Financial Center. Tickets are on sale NOW here: ETIX. 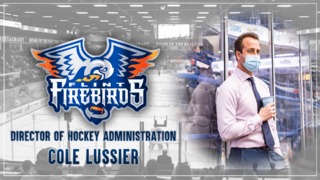