Firebirds Open the Season at Home Tomorrow Night vs. the Erie Otters 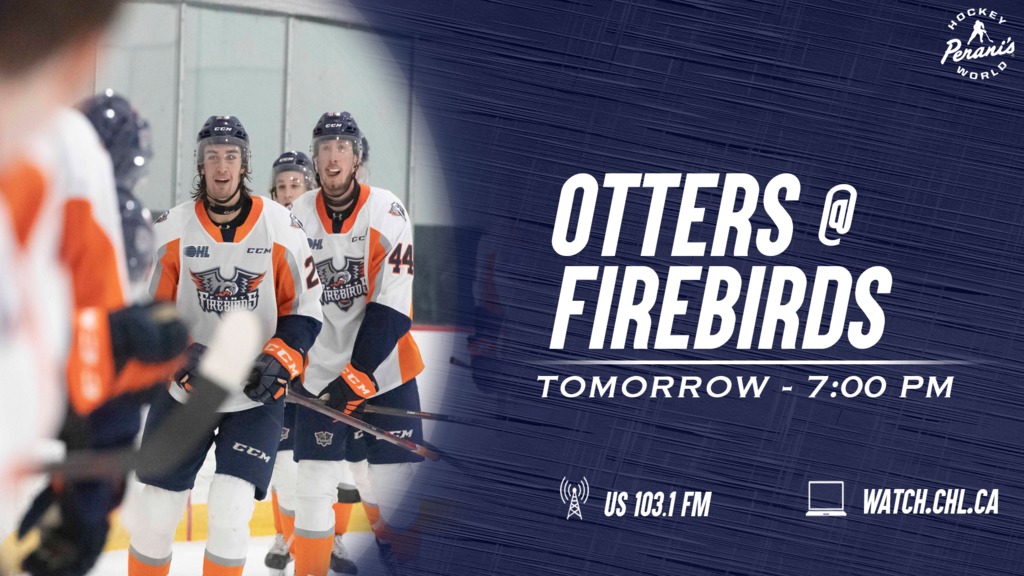 In home-openers, Flint holds an all-time record of 4-1-0-0. In that span, they’ve hosted and defeated the Saginaw Spirit twice, the Ottawa 67’s once, and the Niagara IceDogs once. Last season, the ‘Birds tamed the IceDogs 3-2 on opening night at the Dort Financial Center. Through the four home-opener contests, the Firebirds have outscored their opponents by a margin of 17-12.

Flint played four preseason games this year, two of which were against the Otters. Erie earned the first victory on their home ice September 16 before the Firebirds skated to a 7-6 victory at Flint Iceland Arena on October 2. Leading the way on the scoresheet for Flint in the two games against Erie was first-year center Amadeus Lombardi (4 G, 3 A). Lombardi’s nine total points (5 G, 4 A) in the preseason have him tied for fourth in the OHL after exhibition play, but with fewer games played than all other players in the top-five. Zacharie Giroux finished with two goals and one assist for three points, and rookie Samuel Assinewai tied Lambardi for the most helpers on the team with four.

The Otters played five preseason games and finished with a record of 3-2-0-0. In the two games against the Firebirds, Brendan Sellan (4 G, 2 A) and rookie Spencer Sova (2 G, 4 A) led the way. Rookie Carey Terrance finished second in goals with three. In the entire OHL, Noah Sedore finished exhibition play ranked second in total points with five tallies and six assists for 11 points in five GP. Brendan Sellan tied Flint’s Amadeus Lombardi for fourth with nine total points (5 G, 4 A).

The Firebirds concluded the early-terminated 2019-20 season ranked second in the OHL’s West Division with a record of 40-21-1-1. They ranked fourth in the 10-team Western Conference. Erie finished fifth in the Midwest Division and eighth in the Western Conference. Both teams had clinched a playoff berth, but the tail end of the regular season and the playoffs were canceled before any teams completed their full 68-game schedule.

These two clubs battled twice during the 2019-20 season, and the ‘Birds claimed both victories in overtime with final scores of 4-3 at the Dort Financial Center and 5-4 at Erie Insurance Arena. Brennan Othmann (NY Rangers) lit the lamp in both games to lead all returning Firebirds’ players. All-time, Flint carries a record of 6-7-2-3 against Erie, with a home record of 3-4-2-0. Nine of the 18 total regular-season meetings have gone to overtime, with five of those requiring a shootout to determine the victor. Saturday marks the first of 12 total meetings between these squads this season, and the first of six to be played in Flint.

Return of Othmann and Kressler:

Forwards Brennan Othmann and Braeden Kressler have both been reassigned to the Firebirds from their NHL teams this week. Othmann was selected in the first round (16th overall) by the New York Rangers in the 2021 NHL Draft. He was able to log 11:55 of ice time against the Boston Bruins in the Rangers 3-2 preseason victory on September 28. Kressler went undrafted but was invited to the Toronto Maple Leafs Development Camp, and was recently signed to a three-year entry-level contract by the Leafs.

Newly acquired overage forward Tag Bertuzzi logged 47 total points (25G, 22A) through 57 contests during the shortened 2019-20 OHL season. For the 2020-21 campaign, Bertuzzi played for HK Levine (Slovakia), where he led the team in scoring with 23 points (7g, 16A) in 22 GP. Tag is the son of former NHL’er Todd Bertuzzi, who played his final five NHL seasons with the Detroit Red Wings. Tag’s cousin, Tyler, is entering his sixth season with the Red Wings. Both Todd and Tyler Bertuzzi played with OHL’s Guelph Storm prior to launching their NHL careers.

In the group of returning Firebirds’ players from the 2019-20 season, Riley Piercey logged the most total points with 34 (17 G, 17 A) through 62 games. After being acquired mid-season, Piercey played 27 games with Flint and logged 8 G and 13 A in a Firebirds’ uniform. Brennan Othmann found twine 17 times during the 2019-20 season, which was sixth-most among OHL rookies. He finished tied for 10th among the league’s freshman class in total points with 33 through 55 games.

In net, veteran Flint netminder Luke Cavallin played two exhibition games and earned two victories. He finished with a 4.00 GAA and a .852 SV%. At the early conclusion of the 2019-20 season, Cavallin was credited with 11 wins in 20 appearances, with a 3.68 GAA and .895 SV%. First-year goaltenders Nathaniel Day and Ian Michelone split time in the other two exhibition contests, earning valuable experience at the OHL level. Day finished with .765 SV% and Michelone’s was .800%.

Former 2018 Priority Selection first-round draft pick (4th overall) Daniel D’Amato leads the class of returning players for Erie, having logged 18 goals and adding 14 assists through 63 GP. Brendan Sellan ranks second with 29 total points (13 G, 14 A) in 63 contests a season ago. Sellan also finished the 2021 preseason ranked third in the league with nine points (5G, 4A) through five GP. Connor Lockhart (Vancouver Canucks) topped the rookies on the Otters’ roster in the 2019-20 campaign with 27 total points (9G, 18A) through 57 GP. His point total ranked him 16th among first-year players in the league that season. The top returning defenseman for Erie from the 2019-20 scoresheet is Cameron Morton who earned 12 points (3G, 9A) in 58 GP.

Between the pipes, returning goaltender Aidan Campbell played two preseason games and recorded two wins. He finished with a 4.01 goals-against average (GAA) and a .784 goals-against average (GAA). In the 2019-20 season, Campbell was credited with 10 wins in 26 appearances, earning a 3.65 GAA and a .872SAV%. First-year netminder Nolan LaLonde appeared in three contests, recording one victory along with a 3.00 GAA and a SAV% of .891. Marshall Nichols played in two contests and recorded a GAA of 6.04 and a .778 SAV%.

Broadcast Coverage:
Saturday evening’s contest against the Erie Otters can be heard live on the radio throughout Flint & Mid-Michigan on US 103.1 FM, online at www.us103.com or by downloading the US 103 app here. Jack Sznewajs will call the play-by-play action on the Firebirds Hockey Network (FHN).

The game will also be televised live across the province of Ontario on the OHL Action Pak on channel 467 for both Rogers TV and Cogeco TV cable subscribers. OHL fans with cable television in Ontario can add the OHL Action Pak to their television plan to catch the Firebirds in action, home or away all season long. Also, all Flint Firebirds’ home and away games throughout the 2021-22 regular season can be watched anywhere in the world online on https://watch.chl.ca/ohl. CHL TV is the league’s new and improved video streaming platform that delivers high-quality live and on-demand coverage of all regular season and playoff games annually. The cost is $6.99 for 24-hour access, $24.99 for monthly access, $109.99 for all-access to the 2021-22 Firebirds and OHL season, or $159.99 for all-access to the entire 2021-22 CHL season.