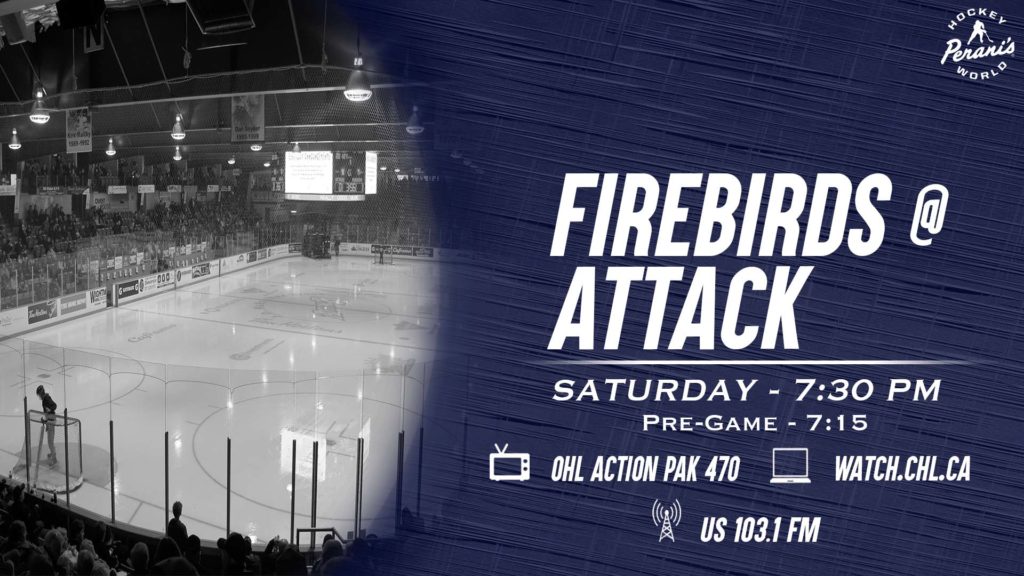 Owen Sound, Ont. – The Firebirds have crossed the border for just the fourth time this season to play a back-to-back pair of games versus the Owen Sound Attack. First up is a Saturday evening tilt, followed by a Sunday afternoon matchup. Puck drop is set for 7:30 p.m. (ET) at the Harry Lumley Bayshore Community Centre Saturday evening in Owen Sound.

The Firebirds enter Saturday’s contest in third place in the West Division with a record of 10-7-0-1. The Attack rank third in the Midwest, with a 9-8-1-2 record. On home ice this year, Owen Sound has gone 6-3-0-1 compared to Flint’s road record of 5-1-0-1. The Firebirds’ win-percentage on the road is .786, which is second-best in the OHL. Against Midwest Division opponents this season, Flint’s record sits at 7-1-0-0.

All-time, Flint carries a record of 6-10-0-0 against Owen Sound, with a road record of 2-8-0-0. In the shortened 2019-20 season, each team won two of the four meetings. Saturday marks the first of four total meetings between the clubs, and the first of two to be played in Owen Sound.

Flint’s last game was played Wednesday evening versus the Spirit in Saginaw. The biggest highlight in the game was the rookie netminder for the Birds Ian Michelone making all 32 saves for his first career shutout in the 3-0 road victory. The Firebirds are one of only two teams in the OHL with two goalies that have shutouts this season. Top-scoring rookie Coulson Pitre lit the lamp for his sixth of the campaign, veteran Riley Piercey also potted his fourth, and Braeden Kressler (Toronto Maple Leafs) found the empty net for his fourth of the season. The Attack most recently dropped a 4-3 decision to the Rangers in Kitchener Friday night.

Brennan Othmann (New York Rangers) tops the charts for Flint with a total of 27 points (14 G, 13 A) in 18 games-played. He’s tied for 11th in total goals scored and 12th in power-play tallies with five. Second in points for Flint is blue-liner Tyler Deline with 16 total points (3 G, 13 A). Deline is tied for ninth among OHL defensemen with 13 assists. His nine power-play assists are sixth-most in the league. Amadeus Lombardi (5 G, 7 A) and Riley Piercey (4 G, 8 A) are tied for third with 12 points each. Piercey is currently on a five-game point streak (2 G, 5 A).

Westland, Michigan native Gavin Hayes has also been hot of late, with six points in his last four games (3 G, 3 A). Flint’s top rookie on the charts is Coulson Pitre with six goals and three assists in 12 games. In the faceoff circle, Braeden Kressler (Toronto Maple Leafs) carries the fourth-best faceoff win-percentage (59.3%) among centers who’ve taken more than 100 draws.

In net, Luke Cavallin has appeared in 15 games thus far. He carries a goals-against average (GAA) of 3.40, which is eighth-best among OHL netminders with 10 or more games. His save percentage (SV%) is .900, which is eighth-best out of the same group. Cavallin has earned eight wins, and is the all-time winningest goaltender in Firebirds’ franchise history with 34 total victories between the pipes. Rookie netminder Ian Michelone has now played three full games, and he carries a GAA of 2.67 and a SV% of .929 with two wins and one shutout.

Deni Goure leads the Attack on the scoresheet with 10 goals and 11 helpers through 20 games-played. Rearguard Andrew Perrott and rookie Servac Petrovsky are tied for second with 18 total points in 20 games each. Perrot has one goal and a team-high 17 assists, and Petrovsky has six tallies and 12 helpers. Perrott’s 10 power-play assists are tied for seventh-most in the OHL currently.

Between the pipes, Nick Chenard has made eight appearances and earned three victories. He carries a 2.67 goals-against average (GAA) and a save-percentage (SV%) of .919. The 2.67 GAA is the sixth-best among OHL net-minders with at least eight appearances, and his SV% is third-best among the same group. Rookie netminder Corbin Votary has one win in five appearances, along with a 4.49 GAA and a .850 SV%.

NHL: The are currently without any players with NHL ties. However, Servac Petrovsky, Gavin Bryant, and Cedrick Guindon were named to the 2021 NHL Central Scouting November Players to Watch List.

Broadcast Coverage:
Saturday evening’s contest against the Owen Sound Attack can be heard live on the radio throughout Flint & Mid-Michigan on US 103.1 FM, online at www.us103.com, or by downloading the US 103 app here. Jack Sznewajs will call the play-by-play action on the Firebirds Hockey Network (FHN). Pregame coverage will begin prior to puck drop at 7:15 p.m. (ET) Saturday evening.

The game will also be televised live across the province of Ontario on the OHL Action Pak on channel 470 (4470 HD) for both Rogers TV and Cogeco TV cable subscribers. OHL fans with cable television in Ontario can add the OHL Action Pak to their television plan to catch the Firebirds in action, home or away all season long.