Firebirds Put on a Show for the Home Crowd, Squeak Past Erie 7-6 in Exhibition Play 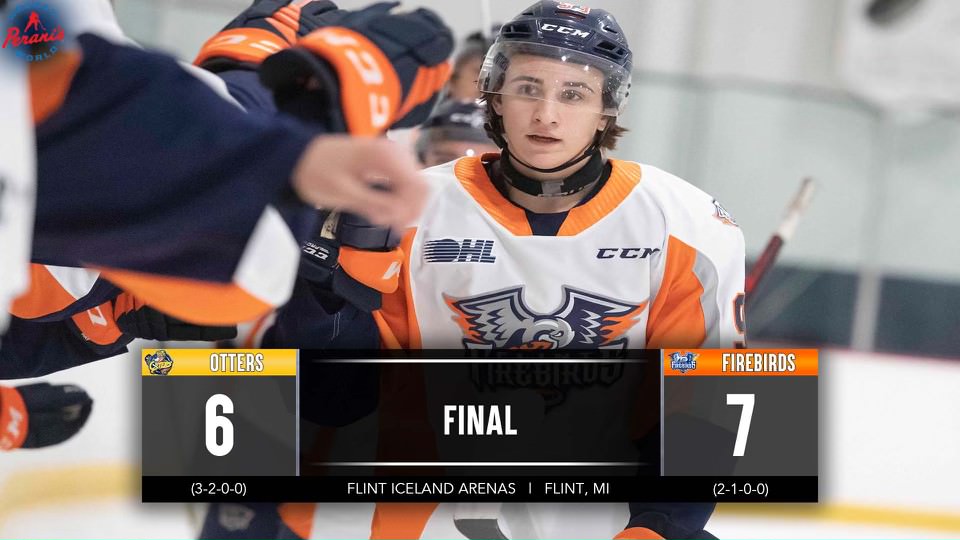 Flint, Mich. – The Firebirds returned to home ice in Flint for the first time in nearly 600 days today, and there was no shortage of excitement at Flint Iceland Arenas this afternoon. A back-and-forth affair saw the Flint Firebirds defeat the Erie Otters 7-6, behind four goals from Amadeus Lombardi and three assists apiece from both Sahil Panwar and Samuel Assinewai. It was 2021 3rd round pick Ethan Hay who picked up the game-winning goal with just 17 seconds remaining.

Amadeus Lombardi opened the scoring for Flint at the 10:10 mark of the 1st Period when he came down the near-side wing and ripped a slap shot off the post and in. That was good for Lombardi’s fifth point of the preseason. Dmitri Kuzmin added a secondary assist on the play as he suited up in his first-ever game with the Firebirds.

A fast-paced 1st Period saw the Otters answer late in the frame. A loose puck at the blue line led to a breakaway chance for Brendan Sellan who deked past Luke Cavallin for his fourth of the exhibition season, tying the game at 1 with 3:14 left in the period.

The Firebirds opened the 2nd Period on the power play, and they quickly took the lead back 35 seconds into the period. Amadeus Lombardi scored his second of the game off a loose puck in front of the net to make it 2-1 Firebirds. Sahil Panwar and Dmitri Kuzmin each picked up their second assists of the game. The Firebirds weren’t done there as newly acquired Coulson Pitre sniped one from the low circle making it 3-1 Flint just 90 seconds later. Newly signed Samuel Assinewai added the lone assist.

Amadeus Lombardi continued to make things happen soon after. Again he found a loose puck around the net and tucked one in short side for the hat trick goal. Tyler Deline and Zacharie Giroux added their first assists of the night and the Firebirds jumped out to a 4-1 lead with just over 15 minutes left in the 2nd Period.

The Otters answered back quickly as Carey Terrance came streaking down the wing to rip one past Luke Cavallin for his 3rd goal of the preseason. After a scoreless end to the 2nd Period, Erie started the 3rd on a carryover powerplay and capitalized 49 seconds into the frame as the OHL’s preseason leading scorer, Noah Sedore, picked up his 4th goal of the exhibition season, trimming the Firebirds lead to 4-3. Spencer Sova added his 2nd assist of the afternoon.

The Firebirds drew back-to-back penalties right after and were given a 5-on-3 for 1:31 at the 18:05 mark of the 2nd Period. Riley Piercey made it 5-3 after banging home a rebound with just five seconds left on the two-man advantage.

Once again Erie responded. Carey Terrance put home his 2nd goal of the game on a rebound chance making it a 1-goal game again with 15:13 remaining the game.

Shortly after, the Otters were given an extended 5-on-3 at the 12:36 mark of the 3rd period. Out of the timeout called by Head Coach Chris Hartsburg, Erie tied things up right away. A shot from the point was deflected and put home by Brendan Sellan for his second of the game. Spencer Sova picked up his fourth assist of the night.

Once again, the Firebirds had an answer. Samuel Assinewai’s shot was deflected and punched in by none other than Amadeus Lombardi, his fourth goal of the game, and Flint retook a 1-goal lead, 6-5 with 10:26 remaining in the game.

The Otters tied the game with 2:20 remaining. And with everyone at Iceland anticipating overtime, Ethan Hay sniped one from just inside the blue line, low-blocker, with 17 seconds left to win the game for the Firebirds, 7-6.

Next Up
The Firebirds are right back at it tomorrow (Sunday, October 3rd) afternoon at 2:00 p.m. as they take on the Saginaw Spirit at Flint Iceland Arenas. Tickets are $10 at the door (cash only) and doors open at 1:00 p.m.

The Firebirds home opener is next Saturday, October 9th at 7:00 p.m. as they welcome back the Erie Otters and return to the Dort Financial Center for the first time since the 2019-20 season. Tickets are on sale NOW here: ETIX