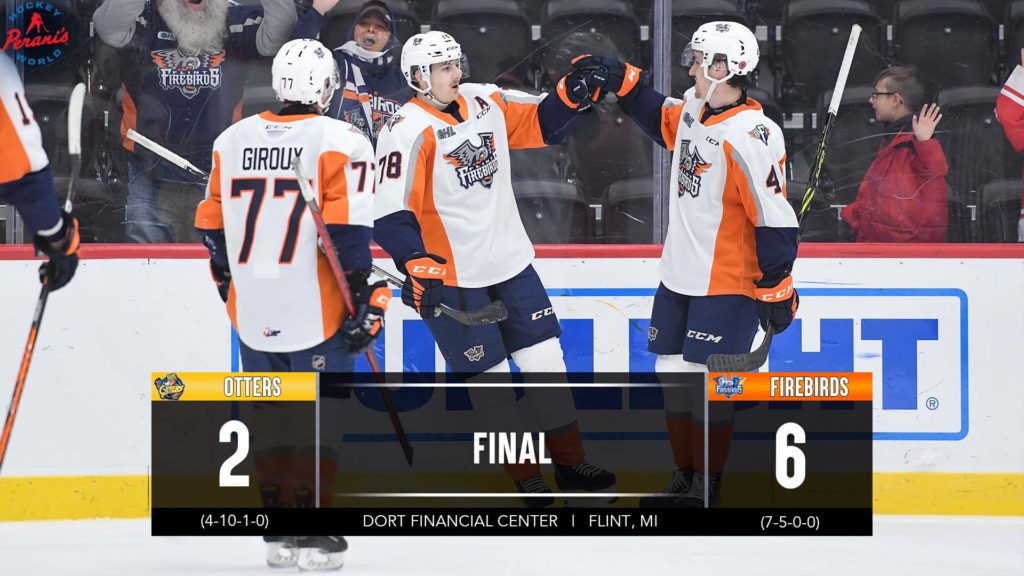 Flint, Mich. – The Firebirds defeated the Erie Otters for the fifth time this season Saturday night in Flint. Brennan Othmann (New York Rangers) netted his team-leading ninth and tenth goals of the season en-route to a three-point game and First-Star honors in the contest. Coulson Pitre logged his fifth marker and Braeden Kressler (Toronto Maple Leafs) lit the lamp with his third of the year plus earned an assist. Sahil Panwar and Riley Piercey each scored his second of the campaign. Owain Johnston and Cameron Lowe potted the markers for the Otters. Between the pipes, Luke Cavallin made 35 saves on 37 shots for his sixth victory of the season. Across the ice, Marshall Nicholls saved 35 of 41 shots faced. On special teams, Flint finished two-for-two on the power and held Erie scoreless in four chances with the man advantage.

Early in the first period, defenseman Dmitry Kuzmin (Winnipeg Jets) hit a streaking Braeden Kressler up the left-wing wall. Kressler crossed the offensive blue line and hit the brakes. He forwarded a short-range pass to Brennan Othmann at the left hash marks. Othmann sniped the five-hole with a quick wrister that trickled past Nicholls at 3:59 of the first period.

Past the midway point of the opening frame, and while on the power play, Tyler Deline cycled to Othmann atop the left-wing circle. Othmann found Sahil Panwar atop the right circle, and Panwar had room to stickhandle to the slot before lifting a quick snapshot that found twine top-shelf, far-side at 11:39.

First-period shots ended 14-7 to Flint’s advantage. The Birds also won 11 of 19 faceoffs during the opening 20 minutes. Flint scored on their only power-play opportunity while killing their lone penalty successfully.

Erie found their way onto the scoreboard at 6:28 of period number two. Elias Cohen carried the puck in the offensive zone and passed to Omani Johnston deep in the left-wing corner. Johnston carried the puck along the end boards and appeared to be taking it behind Flint’s goal. At the last second, he wrapped the puck back in front of Cavallin. The netminder dropped to the butterfly, but his momentum pushed the puck just across the goal line between his skates. Johnston was credited with his second of the campaign, with Cohen getting the lone assist on the tally.

One minute later, Kuzmin passed the puck from the left point to Riley Piercey centered just inside the blue line. Piercey wound back and fired a heavy slapper into traffic, which found its way into the back of the net. Kuzmin had the solo assist on Piercey’s second of the season logged at 7:30, which put the Birds back on top by a pair.

Second-period shots ended even at 11-10 in Erie’s favor. Faceoffs favored the visiting Otters 8-7. Erie was unable to convert on two opportunities with the man-advantage.

The goals came fast and furious in the third period. First, Braeden Kressler backhanded the puck from along the wall in front of his own bench to Zacharie Giroux skating across center ice. Giroux carried into the offensive end and attempted a shot from the left circle. Nicholls kicked the rebound to the end boards, where Giroux reclaimed his own rebound and backhanded the puck the slot. Kressler one-timed it home just inside the near post at 7:17 of the third to put the Firebirds ahead by three. Flint went on the power play moments later. Panwar won an offensive-zone faceoff back to his rearguard Deline, who found Othmann open in the right circle. With Piercey providing the screen in front of Nicholls, Othmann’s wrist shot found the back of the net far-side for his second of the night at 11:32. Then, at 11:45, Cameron Lowe struck paydirt for his second of the year, assisted by Kaleb Smith. Amadeus Lombardi made a pass from behind the goal line to Coulson Pitre for a quick one-timer that resulted in his fifth of the season at 15:37. Marcus Gretz picked up the second assist.

Final shots were 41 for the Firebirds to 37 for the Otters. Faceoffs ended 33-23 in Flint’s favor.

Next Home Game: The Firebirds return to home ice Saturday night to host the Windsor Spitfires for the second time this season. Puck drop is scheduled for 7 p.m. (ET). Tickets are on sale NOW here: ETIX.