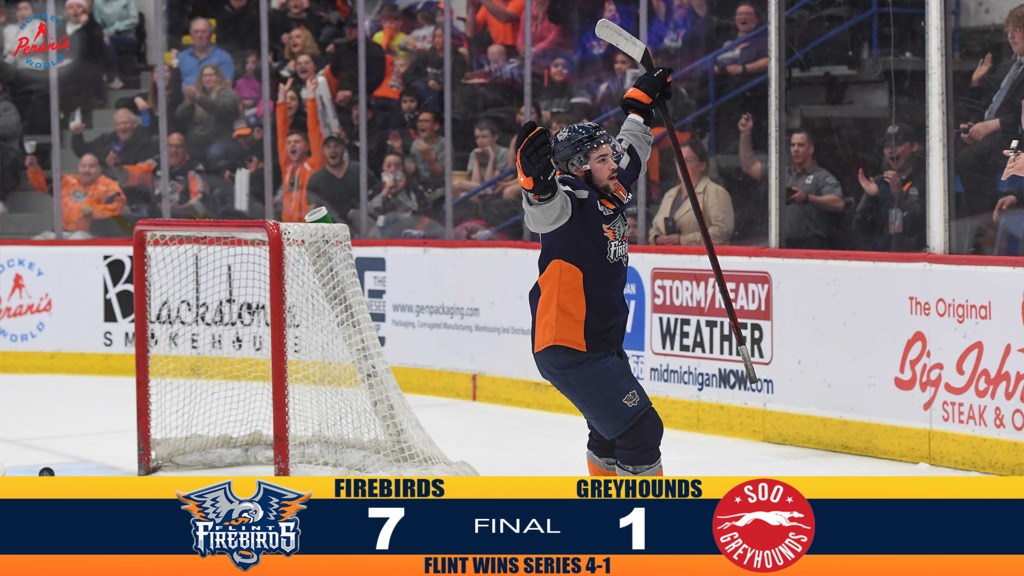 Flint, Mich. – More than 3,300 fans were on hand at the Dort Financial Center Saturday night, as the Firebirds defeated the visiting Sault Ste. Marie Greyhounds 7-1 and advanced to the Conference Finals for the first time in franchise history. Zacharie Giroux scored three times, Gavin Hayes, Coulson Pitre, Simon Slavicek, and Tyler Deline had a goal and an assist each, and Brennan Othmann (New York Rangers) assisted on three tallies to lead the offensive charge for the Birds. Luke Cavallin made 27 saves on 28 shots for his eighth victory of the postseason. Across the ice, Tucker Tynan stopped 48 of the 55 shots against.

Flint controlled play in the early goings, outshooting the Hounds 9-3 in the opening six minutes of play. Throughout the entire first period, the Birds were blocking shots at every position. Cavallin made three critical saves, including a pair of two-on-one breakaways and a defensive turnover between the circles in front of him. In total, Tynan made 16 saves and Cavallin made seven, preserving the scoreless tie through the first intermission. The Soo outdrew the Firebirds 12-7, and Flint was unable to convert on the lone power-play chance of period one.

Early in the middle frame, Flint set up in Sault Ste. Marie’s zone and made some quality passes. Defender Tyler Deline launched what appeared to be a harmless wrist shot on goal from the top of the right circle, and with bodies screening Tynan in front, the puck found twine high glove-side. The goal was Deline’s first career playoff goal, scored at 2:14 of the second period and assisted by James Petrovski and Sahil Panwar.

A minute later there was a disagreement on the ice that resulted in three penalties to the Firebirds. The Hounds skated 5-on-3 for 1:40, but Flint’s penalty-killers and some highlight-reel goaltending kept the scoreboard at 1-0. The complexion of the game changed after the overlapping minors expired, with a significant up-tic in hits and post-whistle conversations.

On their second power-play of the night and with Riley Piercey screening Tynan down low, Deline fed Brennan Othmann (New York Rangers) in the right circle. Flint’s captain made a short-range pass to Gavin Hayes centered above the hash marks. Hayes spun and lifted a wrist shot into traffic that went over Tynan’s left shoulder for his fourth of the playoffs.

With the choppiness increasing, the Firebirds would land a 5-on-3 power-play chance for 1:21 in the 13th minute of the second. Bench Boss Ted Dent used his timeout to prepare the troops. It worked, as the Birds only took 25 seconds of that time to light the lamp and bring the packed house to a frenzy. Gavin Hayes took the initial shot from a wide-angle in the left-wing corner. His shot slipped through Tynan’s equipment and went directly to Zacharie Giroux below the right circle for the back-door goal. Giroux’s marker was his third of the postseason, assisted by Hayes and Othmann.

20 seconds later, and with one player still in the penalty box, the Greyhounds took another penalty. With another 5-on-3 manpower advantage, Luke Cavallin fired a pass to Othmann at the offensive blue line while Sault Ste. Marie was making a line change. One defender caught up to Othmann near the top of the right circle, but his cross-ice pass found Giroux wide open above the left hashmark. Giroux faked a forehand shot in close, and it earned the commitment from Tynan. He held and lifted a backhander inside the far post for his second of the night and fourth of the playoffs at 15:24.

Second-period shots ended at 19-10 to Flint’s advantage. Faceoffs were even at 12 per side. The Firebirds scored three power-play tallies on four chances and held the Soo off the scoreboard with two man-up opportunities.

Just past the two-minute mark of the final frame, Coulson Pitre carried up the right-wing side on a two-on-one break. Pitre passed to Simon Slavicek at the top of the left circle. Slavicek returned the puck to Pitre with a late pass across the low slot. Pitre’s one-timer struck paydirt for his sixth of playoffs at 2:19, scored at even strength.

Past the midway point of the final stanza, Pitre returned the favor to Slavicek. This time Pitre was on the right side and passed from the mid-circle to Slavicek at the far post for the back-door play. The marker was Slavicek’s first of the playoffs, recorded at 11:05.

In the final two minutes of play, and again on the power play, Tag Bertuzzi made a cross-ice pass to Riley Piercey in the right faceoff circle. Piercey clapped a slap-pass to Giroux in the slot, and the redirection resulted in a playoff hat trick. His third of the night was scored at 1:56.

A late goal in the final 30 seconds dissolved the shutout. Cole MacKay lifted a backhand shot high to the blocker side for goal five of the postseason at 19:35, assisted by Robert Calisti and Ryan O’Rourke (Minnesota Wild).

In total, Flint outshot the Greyhounds 55-26 but were outdrawn in the game 34-30. The Soo finished scoreless on two power-play opportunities, while the Firebirds scored four goals on seven chances with the man-advantage.

Next Up: Follow flintfirebirds.com and all social media outlets for details on the upcoming Western Conference matchup with the Windsor Spitfires. Ticketing, scheduling and more will be announced in the coming days.