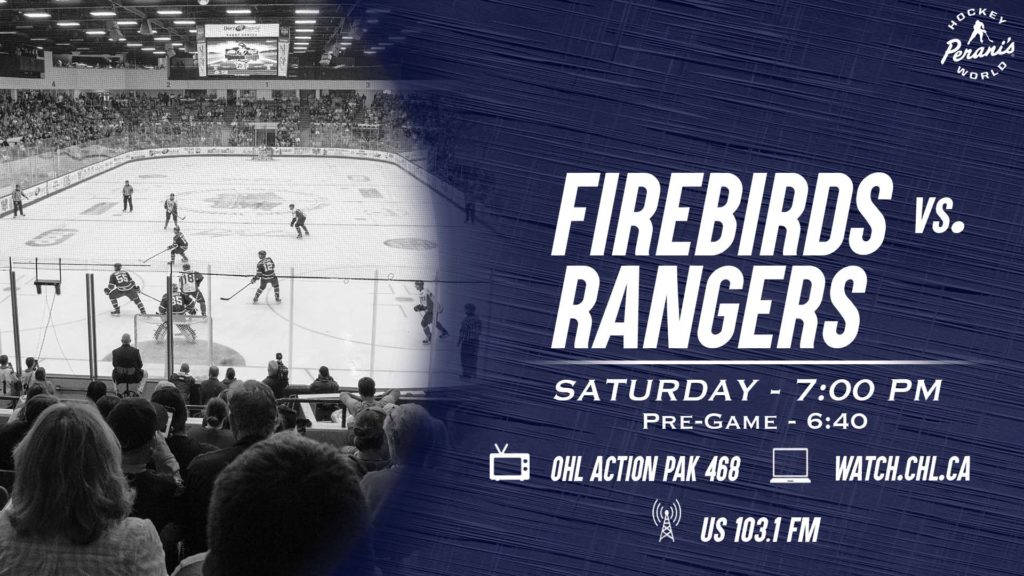 Flint, Mich. – The Kitchener Rangers are in town for a Saturday night tilt in Flint. The Firebirds carry a two-game win streak and seek to win three consecutive games for the first time this season. Puck drop is set for 7:00 p.m. (ET) at the Dort Financial Center in Flint. Great seats are still available HERE.

Most recently, the Firebirds won their seventh game over their up-north rivals from Saginaw by a final score of 6-3. Luke Cavallin made 28 saves on 31 shots for his 15th victory of the campaign. Flint’s newly-appointed Captain Brennan Othmann (New York Rangers) recorded one goal and four assists en route to being named CHL Player of the Night, and Riley Piercey lit the lamp twice and pitched in a helper. The win was the seventh for the Firebirds in game 11 of the 12-game rivalry series. The victory brought the coveted I-75 Divide Cup, presented by Coors Light, back to Flint for the first time since the 2016-17 season.

The first time these teams met this season was November 5 in Kitchener. That night, Flint came out on top 6-4 in the high-scoring affair. Brennan Othmann (New York Rangers) logged his first hat trick (3 G) of the season to lead the Firebirds. Coulson Pitre (1 G, 2 A) and Tristan Bertucci (1 G, 1 A) also offered a strong offensive showing. Francesco Pinelli (2 G, 1 A) and Antonio Pugliese (1 G, 1 A) topped the stats for the Rangers. Luke Cavallin made 19 saves on 23 shots to earn the victory.

More recently, Kitchener visited Flint on November 13 and evened the series 1-1. In that tilt, the Firebirds were unable to solve rookie goaltender Jackson Parsons more than twice in a 4-2 defeat. Tag Bertuzzi and Samuel Assinewai each lit the lamp for the home team. For the visitors, Reid Valade scored twice to lead the visitors. Parsons made 40 saves on 42 shots for his third victory of the season.

On special teams, the Firebirds are converting with the man-advantage at an 18.8% rate, which ranks them 13th in the 20-team OHL. Kitchener has scored at a success rate of 18.7%, which ranks them 14th. Flint is killing penalties at an 83.3% clip, ranking third in the league. The Rangers’ penalty-kill is ranked sixth, with an 80.9% success rate.

Flint’s top rookie on the scoresheet is Coulson Pitre with 12 goals and 13 assists through 27 games played. Pitre ranks at the top of the list of OHL rookies at .93 points per game, and he’s tied for third for goals scored by a first-year player. Pitre is one goal shy of tying former Firebirds’ captain Ty Dellandrea (Dallas Stars) for the second-most goals (13) by a rookie in franchise history, and he’s already earned more points than Dellandrea had (24). He’s also on pace to surpass Brennan Othmann’s (New York Rangers) rookie year numbers in goals (17) and total points (33) for the season. Both Dellandrea and Othmann were drafted in the first round of their respective NHL Draft year.

In net, Luke Cavallin has appeared in 26 games thus far, which is tied for third-most by any netminder in the OHL. He has 14 wins, which are also tied for third-most in the league. He carries a goals-against average (GAA) of 3.37 and his save percentage (SV%) is the OHL’s tenth-best at .901. Cavallin is tied for the second-most victories between the pipes with 15, and he’s one of only six goalies with two shutouts this season, which is tied for the most. Rookie netminder Ian Michelone has now played in eight games and has four victories. He carries a GAA of 4.03 and a SV% of .889. To date, Michelone is the only active OHL rookie goaltender with a shutout this season.

Francesco Pinelli (Los Angeles Kings) leads the Rangers in offense with 13 goals and 20 assists through 29 games played. Mike Petizian has 11 tallies plus 17 helpers for 28 total points in 31 contests. Joseph Serpa ranks third in scoring with four tallies and 21 assists for 25 points through 29 games.

The Rangers’ top-scoring rearguard is Tampa Bay Lightning prospect Roman Schmidt (8 G, 9 A) in 31 games. Schmidt is tied for the second-most goals scored among defensemen in the OHL and is tied for third-most power-play tallies in the same group with three. The top rookie on the scoresheet is Carson Rehkopf with eight goals and six helpers.

Pavel Cajan has appeared between the pipes 21 times this season. Cajan carries a 3.37 goals-against average (GAA) and a save-percentage (SV%) of .902 with ten victories. Rookie netminder Jackson Parsons has played in 11 games, posting a 3.88 GAA and a .887 GAA plus four victories.

Saturday evening’s contest against the Kitchener Rangers can be heard live on the radio throughout Flint & Mid-Michigan on US 103.1 FM, online at www.us103.com, or by downloading the US 103 app here. Jack Sznewajs will call the play-by-play action on the Firebirds Hockey Network (FHN). Pregame coverage will begin prior to puck drop at 6:40 p.m. (ET) Saturday evening.

Next Up: The Firebirds will travel to Sault Ste. Marie, Ont. Friday for a pivotal West Division battle with the first place Soo Greyhounds before returning home Saturday to host the Sarnia Sting. Puck drop is scheduled for 7 p.m. (ET). Tickets are on sale NOW here: ETIX.