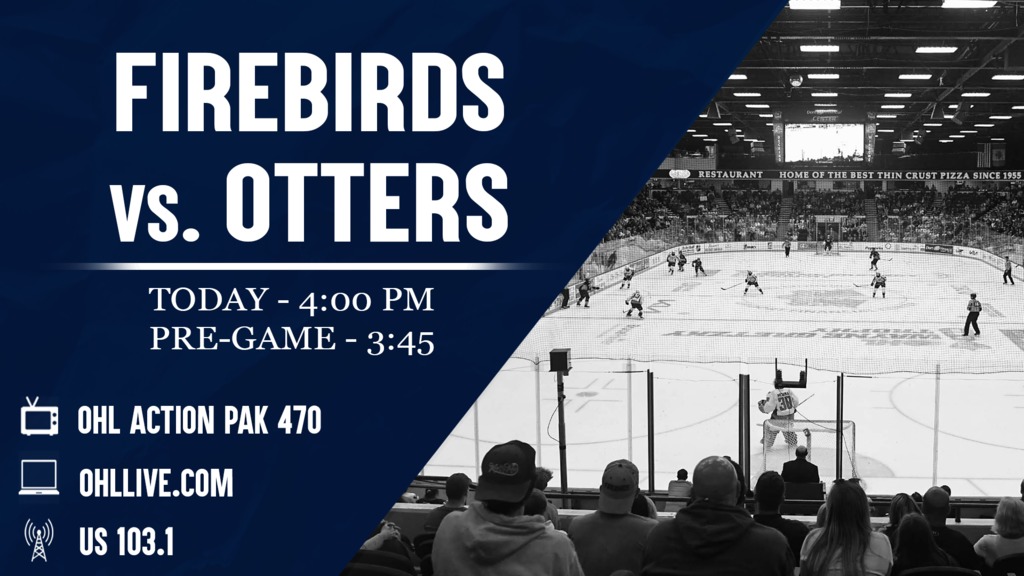 Flint, Mich. – The Firebirds are set to host the Erie Otters on their first-ever Family ‘FUN’day Sunday S.T.E.A.M. Day this afternoon. In the only previous meeting this season, Flint skated to a decisive 8-1 victory at the Erie Insurance Arena in Pennsylvania. Today the clubs reunite in Flint with puck drop set for 4:00 p.m. (ET) at the Dort Financial Center.

So far in the three-games-in-three-days weekend, Nathan Day has backstopped Flint to two consecutive victories. The Birds defeated the Soo Greyhounds in Sault Ste. Marie Friday by a final score of 5-1 before downing the Saginaw Spirit 4-2 on home ice last night. In total, Day made 53 saves on 56 shots across the two contests. Zacharie Giroux (2 G, 2 A), Nolan Dann (2 G, 1 A), and Amadeus Lombardi (2 G) each have two goals on the weekend so far, while Coulson Pitre and Tristan Bertucci each have three assists. Gavin Hayes and Braeden Kressler have each lit the lamp once and assisted on two tallies for three points in two days, as well.

This afternoon’s tilt is the second of four meetings between Flint and Erie this season and is the first of two to be played at the Dort Financial Center. The Birds’ all-time record versus the Otters stands at 17-9-2-2, with a mark of 8-5-2-0 on home ice. Last season the league’s travel restrictions dictated that these teams met a total of 12 times, with Flint logging 10 wins over the Otters. The Firebirds are 5-2-0-0 against opponents from the Midwest Division this year.

On special teams, the Firebirds are 16th on the power play with a 20.2% conversion rate. Erie has scored 18.2% of the time on the man-advantage, good for 19th. When shorthanded, Flint’s killing penalties at a rate of 77.8% which is 12th-best in the league. The Otters rank eighth on the penalty kill with a 79.9% rate of success.

For the Firebirds’ Family ‘FUN’day Sunday S.T.E.A.M. Day game today, fans can get two FREE kids tickets (ages 12 & under) for every ONE paid adult admission, valid at the Dort Financial Center Box 0ffice Only. Starting at 3:00 p.m. when the doors open there will be science, technology, engineering, art, and mathematic activities or demonstrations that will be set up around the concourse for children and families to participate in. Children (17 & under) who partake in all of the activities & demonstrations will receive a FREE S.T.E.A.M. Day puck for their participation, while supplies last. S.T.E.A.M. Day would not be possible without the support of the following organizations: Kettering University, First Robotics, YMCA Camp Copneconic, Math4Flint, and the Flint & Genesee Literacy Group. All other tickets for Sunday’s game can be found at ETIX HERE.

Amadeus Lombardi tops the stats for Flint with 53 total points, stemming from 25 goals and 28 assists through 42 games. He ranks ninth in the OHL in goals scored. Gavin Hayes ranks second on the club with 24 tallies and 19 helpers for 43 points. Braeden Kressler has moved into the third spot with 40 total points (19 G, 21 A) in only 31 contests. Kressler’s 59.4% win percentage on faceoffs is the league’s best among players with more than 300 draws.

Defenseman Dmitry Kuzmin sits fourth with nine goals and a team-leading 30 assists for 39 total points. He ranks fourth among all OHL defensemen for both assists and points. Newcomer Nolan Dann has logged six points (3 G, 3 A) in only five games since joining the Firebirds at the trade deadline, including two goals in Friday night’s victory over the Greyhounds and an assist in last night’s win over Saginaw.

In net, Will Cranley has now appeared in 31 games for Flint this season. He’s earned 14 victories and holds a 3.67 goals-against average (GAA) and a .891 save percentage (SV%). Cranley’s tied for the eighth-most wins in the league. Rookie netminder Nathan Day has seven wins in 16 appearances. His GAA is 4.30 and he carries a SV% of .855.

Third-year forward Brett Bressette leads Erie in offensive production with 13 goals plus a team-high 23 assists for 36 points through 32 games. Pano Fimis is second with 29 total points (10 G, 19 A) in 36 contests. In third is defender Spencer Sova with a balanced 14 goals and 14 helpers in 40 games played. Carey Terrance leads the team in goals scored with 18 and has 26 total points.

The Otters are backstopped by Nolan Lalonde, who has five wins across 23 appearances in the campaign. Lalonde carries a 4.44 goals-against average (GAA) and a .852 save percentage (SV%). Kyle Downey has played in 16 games this season, earning six victories to date. His GAA stands at 3.35 and he has a .881 SV%.

This afternoon’s game against the Erie Otters can be heard live on the radio throughout Flint & Mid-Michigan on US 103.1 FM, online at www.us103.com, or by downloading the US 103 app here. Jack Sznewajs will call the play-by-play action on the Firebirds Hockey Network (FHN), starting with the pre-game show at 3:45 p.m. (ET).

Up Next: The Firebirds hit the road for two away games this week against the Bulldogs in Hamilton on Thursday and then versus the Steelheads in Mississauga on Friday. Flint’s next home game is Saturday evening when they host the Barrie Colts. Puck drop for Saturday’s contest is set for 7:00 p.m. (ET), and great seats are available now from ETIX HERE.