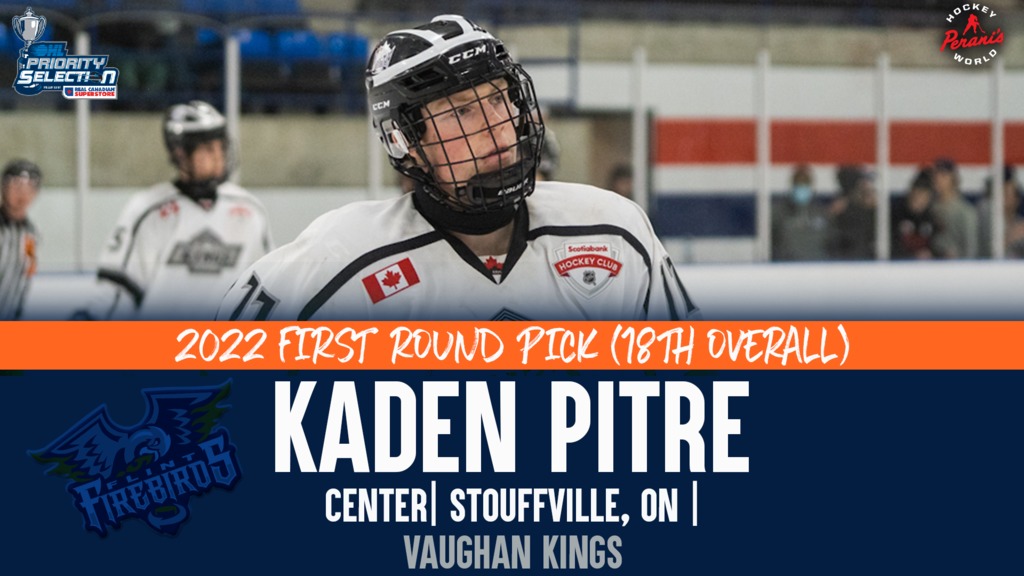 Flint, Mich. – The Flint Firebirds announced today that the club has selected center Kaden Pitre as the 18th-overall pick in the 2022 OHL Priority Selection presented by Real Canadian Superstore.

“It’s a great honor,” Pitre said. “I’m just trying to process everything. I want to do the best I can when I get to Flint and help the team in every way I can.”

Pitre recorded 13 G and 17 A in 31 GP for the Vaughan Kings U16 AAA (GTHL) this season. He is the younger brother of current Firebird forward Coulson Pitre.

“Me and my brother (Coulson) have always wanted to play together,” the younger Pitre said. “It’s a dream come true.”

Pitre becomes the first pick for the Flint Firebirds in the 2022 OHL Priority Selection. He stands at 5-foot-11 176-pounds and hails from Stouffville, ON.

“I’d like to thank my family,” Pitre said “They’re a big part of this and have always been there for me. We are all really happy.”

Scouting report from SI Prospects: “At one point in time, Kaden Pitre was the most feared player in the ETA, and received high praise for being special. Since then, Pitre has taken his talents to Vaughan, where he serves as one of the top players. Pitre is praised for his strong two-way game, which helps assert him as a lethal player on both sides of the ice. Pitre is one of the best skaters around, and he uses this elite skating to help make him a deadly offensive force, which when coupled with his good shot, makes him a scoring threat more often than not. Pitre is a very quiet, yet mature player for his age, a trait that will help him mesh very well on an OHL team with older players on it.”