Firebirds Set for Battle with 1st-Place Battalion This Afternoon 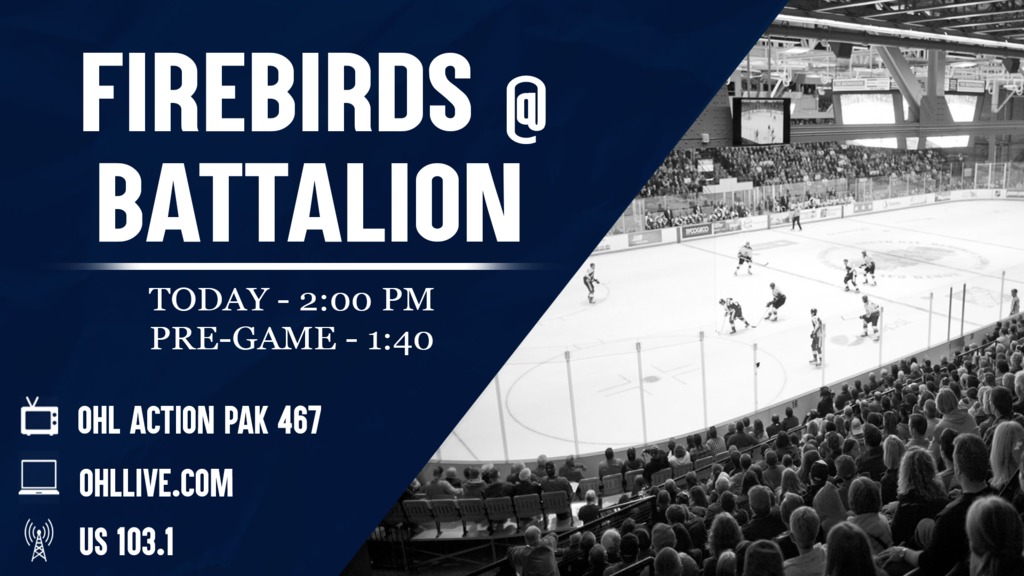 North Bay, Ont. – The next stop on Flint’s five-game road is this afternoon in North Bay against the Battalion. The Firebirds haven’t faced off with North Bay since Dec 8, 2019. Puck drop is set for 2:00 p.m. (ET) at the North Bay Memorial Gardens.

Flint enters tonight’s tilt with a record of 19-17-2-1, sitting in fourth in the West Division and sixth in the Western Conference. North Bay leads the Central Division and ranks second in the Eastern Conference with a 28-10-0-1 mark. The Battalion have the OHL’s best record on home ice at 14-2-0-1 and are riding a five-game winning streak into today’s tilt. The Birds are 11-8-1-0 on the road this season having dropped four in a row.

Tonight’s game is the first of two meetings between these teams this season and is the only time they’ll meet in North Bay. Flint’s all-time record versus the Battalion is 3-5-1-1 with a mark of 1-2-1-1 on the road in the series. The Birds are currently winless in six contests against Central Division foes this season.

On special teams, the Firebirds are 16th on the power play with a 20.1% conversion rate. North Bay has scored 19.9% of the time on the man-advantage, good for 18th. When shorthanded, Flint’s killing penalties at a rate of 78.0% which is 11th-best in the league. The Battalion ranks first on the penalty kill with an 87.1% success rate overall and an even better 91.0% in home games.

Forward Zacharie Giroux has a five-game point streak currently, having scored three goals and added four assists in that span. Giroux and defender Tyler Deline are the only two current Flint players who suited up against North Bay the last time these teams played. Deline is presently tied for the tenth-most points among defenders in the league with 28.

North Bay is led by Matvey Petrov with 15 goals and 38 assists on the season. Petrov ranks fourth in the league in points, assists, and power-play assists (15), and his +25 rating is fifth-best in the league for +/-. Kyle Jackson ranks second for the club with a team-leading 24 tallies plus 28 helpers for 52 points. He’s currently tied for the sixth-most points and the eighth-most goals in the OHL. Defender Ty Nelson is third with 47 points, stemming from 12 goals and 35 assists. His 35 assists are second among league rearguards and his 12 markers are tied for third.

Between the pipes, Dominic DiVincentiis has played in 27 games. His 21 victories are the most of any OHL netminder, and he carries the league’s best goals-against average (GAA) at 2.49 plus the third-best save percentage (SV%) at .908%. Rookie goaltender Charlie Robertson has appeared in 13 contests and is credited with seven wins. He holds a 3.28 GAA and a .885 SV%.

This afternoon’s contest against the North Bay Battilion can be heard live on the radio throughout Flint & Mid-Michigan on US 103.1 FM, online at www.us103.com, or by downloading the US 103 app here. Jack Sznewajs will call the play-by-play action on the Firebirds Hockey Network (FHN), starting with the pre-game show at 1:40 p.m. (ET).