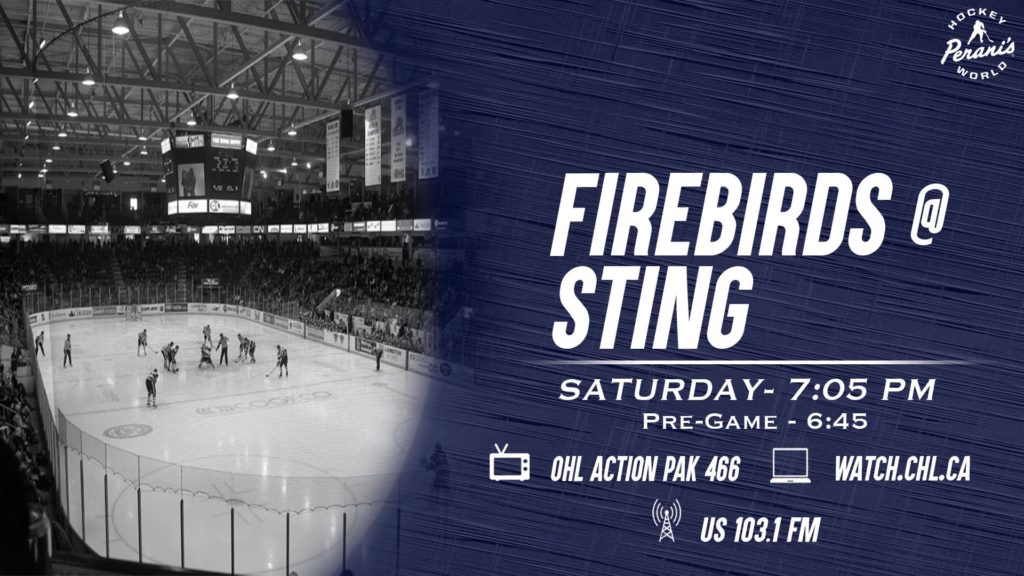 Sarnia, Ont. – After some reshuffling of the OHL schedule, the Firebirds will now invade Sarnia to battle the Sting Saturday night. Puck drop is set for 7:05 p.m. (ET) at the Progressive Auto Sales Arena.

These teams have played twice so far this season, and each team has one victory. On November 26 in Sarnia, Ty Petrou, Riley Piercey, and Amadeus Lombardi each logged a goal and assist, and Brennan Othmann (New York Rangers) chipped in three assists en-route to a 6-3 Flint victory. Luke Cavallin turned aside 34 of 37 shots in the triumph. The next night in Flint, the Sting skated away with a 4-3 win. After trailing 2-0 early, the Sting went on to score four-straight and secure the road win. Ethan Ritchie and Ty Voit each had two points (1 G, 1 A), and Benjamin Gaudreau made 27 saves on 30 shots for the Bees that night.

Saturday marks the third of eight meetings between the two clubs this season, and the second of four games in Sarnia. All-time, the Birds hold a record of 21-18-1-0 versus the Sting and are 8-12-0-0 at the Progressive Auto Sales Arena. Last season (2019-20) the ‘Birds won five of eight games in the series.

On special teams this season, Flint’s killing penalties at the OHL’s best rate of 86.9%. Sarnia’s penalty-killers are ranked fifth at an even 80.0% efficiency. With the man-advantage, the Sting rank 18th in the league, converting at a rate of 15.5% and the Firebirds are 13th, scoring at a 18.5% clip.

Brennan Othmann (New York Rangers) continues to run the leaderboard for the Birds, now with 22 goals and 19 assists for 41 total points in 27 games. He ranks second in the OHL for goals-scored, is tied for second with three shorthanded tallies, and is tied for sixth in total points. Riley Piercey sits second in points with 25 (11 G, 14 A) through 22 games played. Amadeus Lombardi is third on the club with 12 goals and 11 helpers through 26 games.

Defenseman Tyler Deline tops the blue-line unit with three goals and 19 assists for 22 total points. Deline also sits tied for second among all OHL defensemen and tied for seventh across the entire league with 13 power-play assists. He’s tied for seventh-most assists and eleventh-most points among rearguards in the league. Rookie Coulson Pitre was just named the ‘OHL Rookie of the Month’ for December, and he now has 21 points (9 G, 12 A) in 21 games. He’s first in the OHL’s rookie class with a 0.95 points-per-game average, tied for seventh in total points for rookies, and tied for ninth in total goals among first-year players.

In net, Luke Cavallin has appeared in 19 games this season. He carries a goals-against average (GAA) of 3.34 and a save percentage (SV%) of .900. Cavallin has earned 11 wins, with one of them being a shutout. His 11 wins are tied for the fifth-most of any goaltender in the OHL. Rookie netminder Ian Michelone has now played in eight games and has four victories. He carries a GAA of 4.03 and a SV% of .889. Michelone remains the only active OHL rookie goaltender with a shutout this season. Nathaniel Day has played 18 minutes of OHL action and made four saves on four shots.

Ty Voit (Toronto Maple Leafs) tops the Sting in scoring with 29 points (8 G, 21 A) through 24 games played this season. Nolan Burke ranks second overall in points with 27, comprised of 14 goals and 13 helpers in 25 contests. Burke also rides a four-game point streak (2 G, 4 A) into Saturday’s tilt. Nolan Dann sits third with a team-high 15 goals and nine assists in 25 games.

Bloomfield, Mich. Native Ryan Mast (Boston Bruins) leads the group of defenders for the Sting with 12 points (3 G, 9 A) on the season. Max Namestnikov tops the freshman class with four goals and ten assists.

Sarnia is backstopped by two netminders with NHL ties. Benjamin Gaudreau (San Jose Sharks) has six wins in 14 appearances. He carries a 3.15 goals-against average (GAA) along with a .906 save-percentage (SV%), which is tied for fifth-best in the OHL. Anson Thornton (Arizona Coyotes) has four wins in 12 appearances, along with a 4.17 GAA and a SV% of .879.

Saturday evening’s contest against the Sarnia Sting can be heard live on the radio throughout Flint & Mid-Michigan on US 103.1 FM, online at www.us103.com, or by downloading the US 103 app here. Jack Sznewajs will call the play-by-play action on the Firebirds Hockey Network (FHN). Pregame coverage will begin prior to puck drop at 6:45 p.m. (ET) Saturday evening.

Next Home Game: The Firebirds next home game is set for January 21st against the Soo Greyhounds. They were originally set to host the Kitchener Rangers Wednesday, January 12. All home games are tentative as the league continues to maneuver around the new regulations in place by the Ontario government. Follow FlintFirebirds.com for more updates, as they become available. You can purchase tickets for all Firebirds home games at Etix.com HERE.