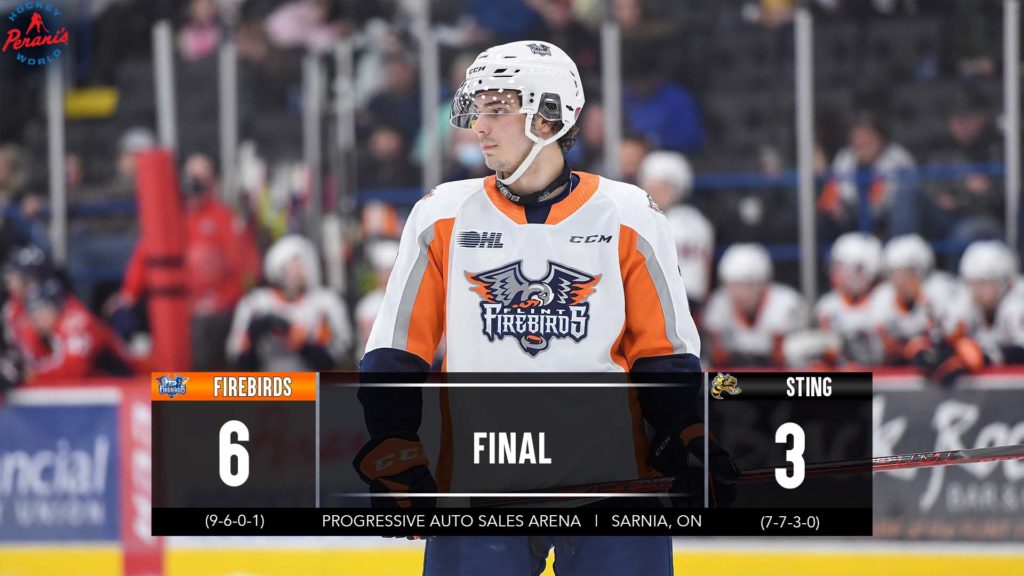 Sarnia, Ont. – The Firebirds defeated the Sting in Sarnia by a final score of 6-3 Friday night in front of nearly 2,500 fans. Luke Cavallin earned his eighth win between the pipes, making 34 saves on 37 shots en-route to Second-Star honors for the game. Brennan Othmann (New York Rangers) was named the game’s First Star for his three-point (3 A) performance. Gavin Hayes scored and picked up two helpers, and Amadeus Lombardi, Ty Petrou, and Riley Piercey each had a goal and an assist. The Sting’s goal-scorers were Max Namestnikov, Brayden Guy, and Nolan Dann. Anson Thornton (Arizona Coyotes) made 26 saves for Sarnia.

The Firebirds scored the lone goal of the first period. Ethan Hay passed the puck from the right offensive corner through the slot to Gavin Hayes on the far side. As Thornton slid across his crease to follow the puck, Hayes passed it back across the slot to Ty Petrou for the back-door one-timer. The goal was Petrou’s first OHL goal, logged at 7:47.

The Sting outshot the Birds 11-9 through the first 20 minutes. Both teams won eight faceoffs. Sarnia had one chance on the power-play, and Flint played the final 42 seconds of the opening frame with the man advantage.

Brennan Othmann (New York Rangers) set up a pair of quick Firebirds’ goals early in the middle stanza. First, while still on the carry-over power play from the first period, he passed from the right boards to Tyler Deline centered just inside the offensive blue line. Deline wound up and fired a shot on goal. Riley Piercey was battling in front of Thornton and was able to tip the shot past him for his third of the season at 1:14. Next, only three minutes later, Othmann passed from the right corner to James Mayotte at the right faceoff dot. Mayotte one-timed the pass quickly across the slot to Zacharie Giroux all alone to Thornton’s left. Giroux buried it inside the near post for his sixth of the year at 4:16.

Over the next ten minutes of play, Cavallin would be challenged numerous times, including two all-out Sarnia breakaways and a two-on-one that resulted in a great scoring opportunity for the Sting. He stood tall and made several key saves to keep his team ahead by three.

Sarnia then shifted the momentum back in their direction and netted two in the final four minutes of the second period. Justin O’Donnell carried the puck up-ice one a two-on-one breakaway with Wolverine Lake, Mich. native Max Namestnikov in tow to his left. The Flint defender dove to the ice to break up the play, but O’Donnell carried around him before sliding the puck across the low slot. Namestnikov didn’t one-time the pass, but instead faked a shot, hit the brakes, and carried in front of Cavallin from his right to his left before slipping it inside the far post. The goal was Namestnikov’s fourth of the season, assisted by O’Donnell and Theo Hill at 16:15 of period two.

Less than a minute later, the Sting charged up ice on another two-on-one opportunity. This time, Brayden Guy carried up-ice on the left-wing side. The Flint defender committed to the pass, so Guy shot the puck himself from point-blank range. The puck found twine high glove-side for Guy’s fifth of the season at 17:11, assisted by Nikita Terasevich.

Flint held the 3-2 lead going into the second intermission. The Sting produced the lion’s share of shots again, this time by a 15-8 margin. Faceoffs during the middle frame were 13-11 in Sarnia’s favor as well. The Birds scored one power-play goal in two chances and killed off both penalties taken in the second.

Nolan Dann extended his point streak to 10 games and tied the game at three at 8:43 of the third period. Ty Voit (Toronto Maple Leafs) made the pass from along the boards between the players’ benches to Dann as he crossed the blue line. Dann lifted a wrister far-side, over Cavallin’s right pad, for his tenth of the season, assisted by Voit and Ryan Mast (Boston Bruins).

Flint then scored the final three goals of the game in the final six minutes of regulation. First, Amadeus Lombardi won an offensive-zone faceoff in the right circle and sent the puck directly to the stick of Gavin Hayes. Hayes wasted no time sniping the top corner, glove-side, for his third goal of the season at 14:14. Just over a minute after Hayes’ marker, Othmann shot and the rebound was blockered over the net and off the end boards. Piercey gathered the loose puck and returned it to Othmann at the inner edge of the right circle. Othmann quickly fed Sahil Panwar in the high slot for a one-timer that lit the lamp for his fourth at 15:31.

Sarnia pulled Thornton for the extra attacker near the two-minute mark. However, Ty Petrou chipped a puck away from a defender that resulted in Lombardi getting a breakaway on the empty net. Lombardi was credited with his fifth of the season at 18:05.

The final shot clock showed 37 for Sarnia and 32 for Flint. The Sting finished with 34 faceoffs wins out of 64. On special teams, the Firebirds converted on one of three power-play chances and kept the Sting scoreless on all three opportunities with the man advantage.