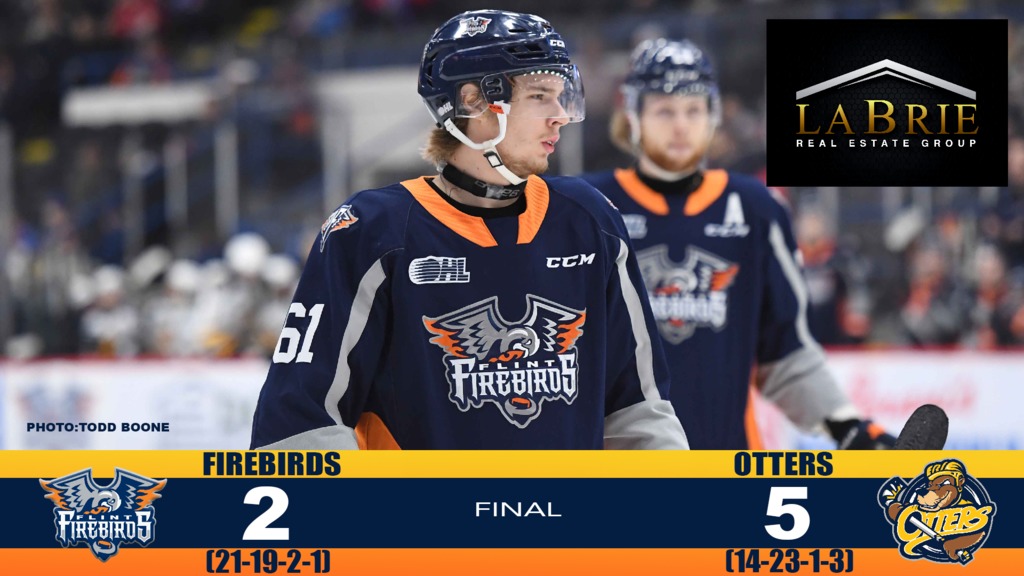 Flint, Mich. – After picking up wins on Friday and Saturday evening versus the Greyhounds and Spirit, the final game of the busy weekend went to the visiting Erie Otters on Sunday afternoon. Nathan Day started his third game in three days and posted 23 saves on 27 shots in the effort. It was sophomore netminder Kyle Downey in his 17th appearance making 41 saves to earn his seventh win between the pipes. Noah Sedore scored three consecutive goals for a hat trick for Erie, while Coulson Pitre and Braeden Kressler were Flint’s goal-scorers.

The Otters lit the lamp first while shorthanded at 4:53 of the opening frame. A loose puck bounced off the kickplate behind Day and slid out to Day’s right. Pano Fimis was able to gather the rubber and spin before lifting it over the goaltender’s blocker for his 11th, assisted by Carey Terrance.

Then at 12:35, Noah Sedore netted his ninth of the season off a loose puck at the top of the right circle. His wrist shot found twine far side below the blocker and was also unassisted. Sedore struck once again with only 19 seconds remaining in the first period while on a power play. His shot came from the top of the left circle this time and made it through a screen to give the Otters a 3-0 lead entering the first intermission. Alexis Daviault and Colby Saganiuk combined with the helpers.

First-period shots ended at 12-8 in favor of Erie, while Flint won nine of 15 faceoffs. The Otters scored on their only power-play chance in the first, and the Firebirds finished 0-for-3.

The teams skated through a scoreless middle frame, despite the Birds creating 17 shots on goal to only four from Erie. The Otters went scoreless with one power-play opportunity while Flint was 0-for-2. The visitors won 12 of 19 second-period faceoffs.

After an offensive flurry by the Firebirds around the Erie net, a loose puck was gathered by Owain Johnston deep in his defensive end and sent across center ice to spring Sedore free on a breakaway. He skated in all alone on Day and buried it low to the blocker side to complete the natural hat trick at 11:12 of period three.

The Firebirds were finally able to solve Downey after Tristan Bertucci’s slapper from the left point was tipped sky-high by Riley Piercey below the left circle. The puck came down in the blue paint to Downey’s left where Coulson Pitre backhanded in for his 18th of the campaign at 11:54, pulling the Birds within a pair.

Next was Braeden Kressler sniping a wrister from the right circle while shorthanded for his 20th of the season at 14:21. Zacharie Giroux initiated the play, intercepting a pass in the neutral zone and carrying across the blue line before backhanding a pass to Kressler on his right.

Bench Boss Ted Dent utilized his timeout with just north of two minutes to go in regulation. Day was pulled for an extra attacker, but the Otters potted their fifth of the contest at 18:11. Carey Terrance snagged a rebound and found Malcolm Spence open for an empty-netter, his ninth.

Final shots were 43 from Flint and 28 by the Otters. Erie also outdrew the Firebirds by one, 28-27. The Firebirds went scoreless on five power-play chances while holding Erie to one goal on four opportunities with the man advantage.

Up Next: The Firebirds hit the road for two away games this week against the Bulldogs in Hamilton on Thursday and then versus the Steelheads in Mississauga on Friday. Flint’s next home game is Saturday evening when they host the Barrie Colts. Puck drop for Saturday’s contest is set for 7:00 p.m. (ET), and great seats are available now from ETIX HERE. 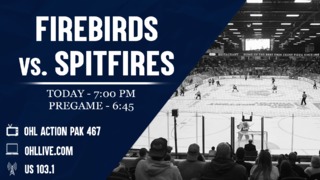