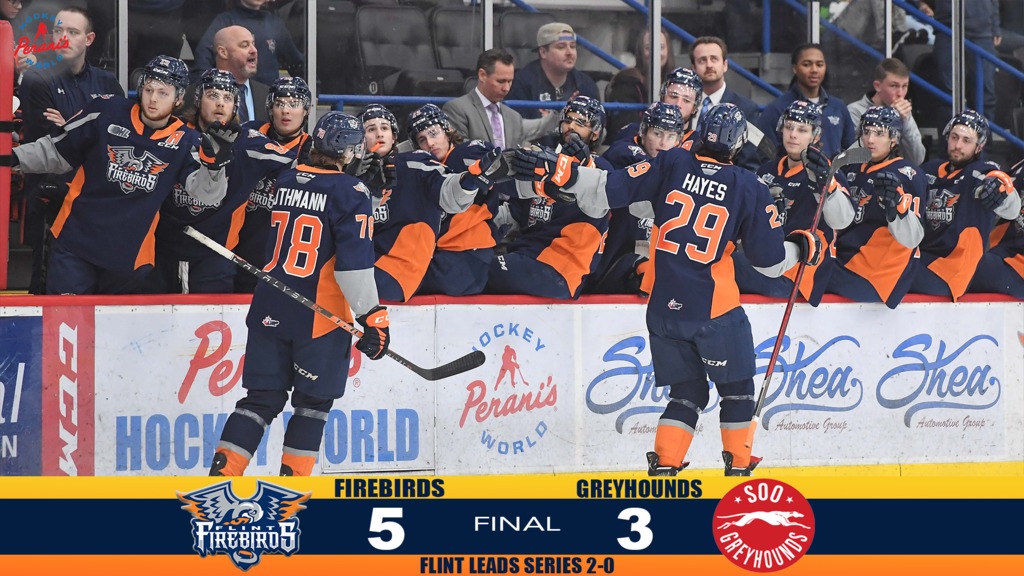 Flint, Mich. – The Firebirds defeated the visiting Sault Ste. Marie Greyhounds 5-3 in front of an electric crowd at the Dort Financial Center on Mother’s Day. Brennan Othmann (New York Rangers) led the charge for Flint with a three-point night (2 G, 1 A) and ‘Second Star’ accolades. Rookie forward Gavin Hayes logged a goal and an assist and was named the ‘Third Star.” Netminder Luke Cavallin earned ‘First Star’ honors with a very impressive 53 saves on 56 shots. For the Soo, defenseman Ryan O’Rourke (Minnesota Wild) picked up a goal and an assist to top the charts, while goaltender Samuel Ivanov made 30 saves on 35 shots faced.

The Greyhounds capitalized on the first power-play opportunity of the night less than one minute into the first period. After setting up on the perimeter of their offensive zone, the Hounds made a few passes between the defenders just inside the blue line. Eventually, Rory Kerins (Calgary Flames) returned a feed to Ryan O’Rourke (Minnesota Wild), who slipped a pass between two of Flint’s rearguards. The pass hit Tye Kartye (Seattle Kraken) in the left circle, and his quick wrist shot got past Cavallin up high near side for the winger’s sixth of the playoffs at 1:13.

Moments later, another Firebirds player went to the penalty box, but the complexion of  Sault Ste. Marie’s second chance with the man-advantage looked quite different. The Birds had the best scoring chances of the two minutes, with both Ethan Keppen (Vancouver Canucks) and Brennan Othmann creating all-out breakaways on the first-year netminder, but he thwarted both opportunities. Flint was able to kill off the second penalty.

Just past the midpoint of the opening frame, a strong defensive effort in their own end resulted in a scoring opportunity for the Birds at the other end of the rink. Zack Terry made the breakout pass to Othmann, who carried up the left side of the neutral zone. He made a quick pass just out of the reach of two defenders to Gavin Hayes on the right. Hayes quickly lifted a wrister near-side for his first playoff goal at 10:43, scored at even strength.

With less than a minute to play before the first intermission, Zacharie Giroux won an offensive zone faceoff and in one motion sent the puck to Othmann at the inner hash marks of the left circle. Othmann lifted the stick of the Soo defender and one-timed the puck just over Ivanov’s left pad, just inside the far post for his sixth of the postseason, logged at 19:18.

First-period shots favored the Firebirds 15-13. The Greyhounds won the faceoff battle 13-11. The Soo scored once on three power-play chances, and Flint went scoreless in one opportunity with the extra man.

The Greyhounds started the second period with a flurry of shots on Cavallin, including an initial breakaway. Flint’s goaltender put up a wall and turned all the shots away. Then, the Firebirds went up 3-1 off another offensive-zone faceoff win. Simon Slavicek won the draw straight back to Coulson Pitre cutting across from the far boards. Pitre immediately one-timed the puck on goal and caught Ivanov off guard, striking twine far side for his fifth of the playoffs, recorded at 2:41.

The Greyhounds cut the deficit to one again near the 8-minute mark of the middle frame with their second power-play marker of the game. Kerins took the initial shot, which went off Cavallin’s equipment and shot straight up into the air. Cole MacKay was on the doorstep to knock the puck out of midair with the blade of his stick, finding the back of the net for his fourth playoff goal. After a lengthy review for a possible high stick, the goal was allowed. The time of the goal was 7:53, and the assists went to Jack Thompson (Tampa Bay Lightning) and Kartye.

Sault Ste. Marie would score their first even-strength marker just over one minute later to tie the game at three. A mishandled puck in the Birds’ defensive end resulted in three quick passes in close on Cavallin. O’Rourke stole the errant pass and fed Marco Mignosa to Cavallin’s left. Mignosa quickly passed across the top of the crease to Tyler Savard on the opposite of the crease for the backdoor one-timer. Savard’s tally was his second of the postseason, scored at 8:58.

The score remained tied at three going into the second intermission. The Hounds more than doubled the Firebirds on the shot clock, earning a 21-10 advantage in the center stanza. The Soo also outdrew Flint 17-9. While the Birds went without a chance on the man-advantage, Sault Ste. Marie scored once on two chances.

The Firebirds reclaimed the lead at 5:22 with an even-strength tally. Gavin Hayes tried to hit Othmann with a pass across the offensive circles, but a defender knocked the pass away. Amadeus Lombardi was the third man in on the play, and he completed the pass across to his captain, now at the bottom of the right circle. Othmann one-timed the puck behind Ivanov for his second of the night and seventh of the postseason.

With under six minutes to play in regulation, Tag Bertuzzi carried up the right-wing side of the zone and sniped a wrister under Ivanov’s glove from atop the faceoff circle for his second playoff goal at 14:28. Ethan Hay picked up the assist on the marker, which gave the Birds a late 5-3 edge.

With 3:22 to play, Ivanov was called to the Soo bench for the extra attacker. Both teams would use their timeouts over the next 60 seconds of game time. Cavallin thwarted off another flurry of shots late to preserve the victory.

In the end, the Greyhounds outshot the Firebirds 56 – 35. The Soo also finished with the advantage in shots 42 – 30. On the power play, Sault Ste. Marie finished with two goals on five chances and Flint ended scoreless with only one opportunity.

Next Up: The Firebirds will travel to Sault Ste. Marie for games 3 and 4 of the series. Both games start at 7:07 p.m. (ET), with Game 3 scheduled for Tuesday and Game 4 for Thursday. Fans can follow all the action on the radio throughout Flint & Mid-Michigan on US 103.1 FM, online at www.us103.com, or by downloading the US 103 app here. Jack Sznewajs will call the play-by-play action on the Firebirds Hockey Network (FHN) with the pre-game show set for 6:45 p.m. before each game.. Game five of the series, if necessary, will return to Flint next Saturday, May 14. Puck drop for the fifth game will be 7:00 p.m. (ET), and tickets will be available from ETIX, in person at the Dort Financial Center box office, or by calling (810) 744-0580. Follow flintfirebirds.com for details and availability of Game 5 tickets (if necessary).