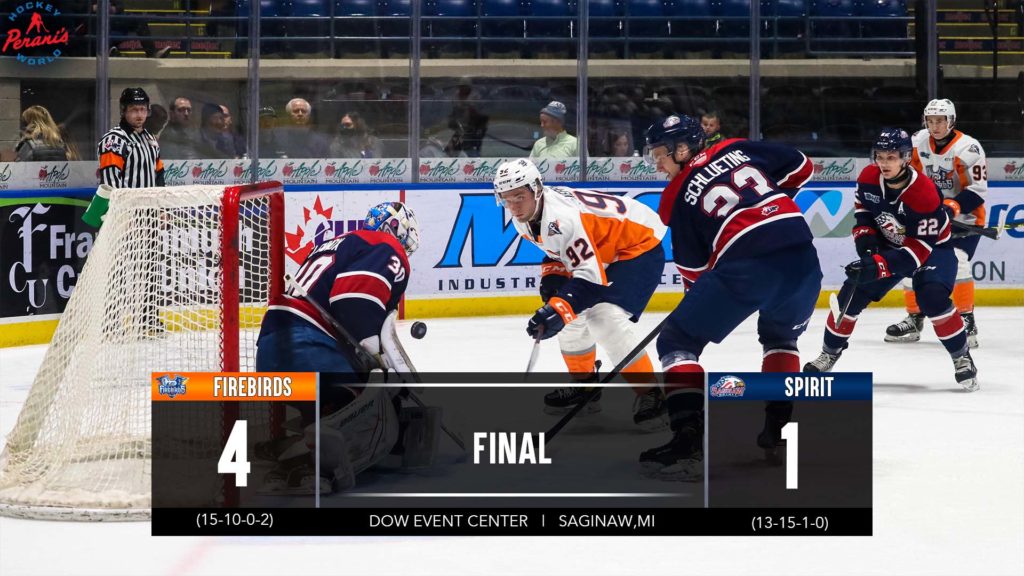 Saginaw, Mich. – After originally being scheduled to play the Guelph Storm Wednesday night, the Firebirds had to re-group vs. a new opponent, one they are very familiar with. The Firebirds and Saginaw Spirit met for the ninth time already this season with the I-75 Divide Cup, sponsored by Coors Light, deadlocked at four coming into tonight’s contest. The rubber match was a back-and-forth contest that saw the Firebirds pull away for the 4-1 win. Luke Cavallin got the start in the net for Flint while it was Tristan Lennox (New York Islanders) for the Spirit. Cavallin ended up earning 1st Star earnings stopping 31 of 32 shots, Brennan Othmann added s honors with a goal and an assist.

The Firebirds picked up the first man-advantage of the game just over five minutes into the opening frame. After several shots and scrambles in front of Lennox, the Firebirds were unable to find paydirt on their first power play of the game. However, Nick Wong played the puck before being completely out of the penalty box leading to an interference penalty which gave the Firebirds another chance. This time, the power play was held in check, and this time as he stepped out of the box, Nick Wong streaked down the far side of the offensive zone and let one fly that deflected off the Firebirds defenseman and in behind Luke Cavallin that gave the Spirit a 1-0 lead with 10:47 left in the opening frame.

Over the next few minutes, the Firebirds struck iron twice in behind Lennox. First, it was Zacharie Giroux off the crossbar, then a couple of minutes later Coulson Pitre sent one in off the post behind the Spirit netminder. Finally, the Firebirds were able to tie things up. After a centering pass was deflected by Piercey off Lennox right in front of the net, the puck squirted free to the bottom of the near side circle and Brennan Othmann (New York Rangers), on his birthday, put home his 22nd of the year to things up at 1 with 2:22 remaining in the 1st. Piercey picked up the lone assist on the tying goal.

Justin O’Donnell was sent to the box for tripping with 23 seconds remaining in the frame. The Firebirds took a 1:37 carryover powerplay into the intermission with the score tied at one. Shots read 15-12 Flint after won, and they dominated in the face-off dot as well 11-6.

The 2nd Period started with an unsuccessful Firebirds powerplay after a couple of early shots on Lennox. The teams proceeded to go back and forth over the next several minutes, but only combined for three shots through the first nine minutes of the middle frame.

Finally, Ethan Hay stole the puck at neutral ice and came streaking down the near-side wall on a 2-on-1. He passed cross-ice to the back post and Tag Bertuzzi put it home for his fifth of the season, giving the Firebirds a 2-1 lead at the 9:31 mark of the period.

The Firebirds finally took their first penalty of the game 15:34 into the middle stanza as Ethan Hay sat for slashing. The #1 PK in the entire OHL lived up to the hype as the Spirit were held shotless on their man-advantage.

Shortly after, Amadeus Lombardi cycled his way through several Spirit in the offensive end, before cutting in and going bar down behind Lennox for his 12th of the season, unassisted, to give the Firebirds a 3-1 lead with just over three minutes remaining in the 2nd. That was the lead the Firebirds held through 40 minutes. They outshot the Spirit 9-7 in the middle frame.

The 3rd Period started with a flurry of chances in the Firebirds’ end, but Luke Cavallin stood tall with the highlight being a sprawling save to deny Pavel Mintyukov a wide-open net not once, but twice in the early going.

At the 11:21 mark of the 3rd, a scrap broke out at center ice that led to Riley Piercey receiving game misconduct giving the Spirit their second power play of the game, still trailing 3-1. Despite allowing a couple of shots this time, the Firebirds PKers stood tall once again successfully killing off the penalty.

Saginaw pulled Lennox with 3:40 remaining in the 3rd, and it took just 28 seconds for the Firebirds to capitalize. James Mayotte stole in the defensive end, hit Othmann at neutral ice, who went cross-ice for a wide-open Ethan Keppen, who then buried his first of the year in his first game back with just 3:12 remaining to give Flint a 4-1 lead, which wound up being enough for the final score. The ‘Birds outshot their rivals 32-31 and held the same edge in face-offs at 24-23 in their favor.

The Firebirds take their first lead in the I-75 Divide Cup, sponsored by Coors Light, this season after their win tonight in Saginaw. They lead the Cup 5-4 with just three meetings remaining between the two teams.

Next Up:  The Firebirds hit the road once again Friday night to take on the London Knights at Budweiser Gardens. Puck drop is set for 7:30 p.m. with Jack Sznewajs providing pre-game coverage on the Firebirds Hockey Network US 103.1 FM at 7:10. The Firebirds return home Saturday vs. the Knights. It’s Firebirds Fight Hunger Month, meaning if you bring in 5 NON-perishable food items, you will receive a FREE ticket to the game, courtesy of Dort Financial Credit Union. Puck drop is scheduled for 7 p.m. (ET) at the Dort Financial Center. Tickets are on sale NOW here: ETIX.