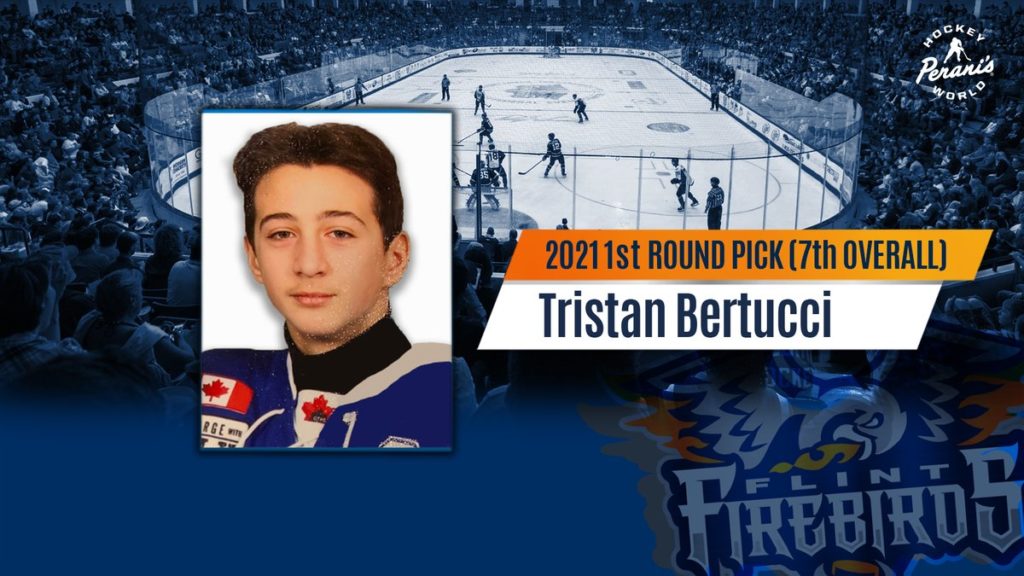 Flint, Mich. – The Flint Firebirds announced today that the club has selected defenseman Tristan Bertucci as the 7th-overall pick in the 2021 OHL Priority Selection Draft presented by Real Canadian Superstore.
“We are really excited to draft Tristan with our first pick,” President of Hockey Operations Terry Christensen said. “Not only is he a great player, but he also’s a leader for his hockey club, has great character and we can’t wait to get him in our locker room.”

Flint, Mich. – The Flint Firebirds announced today that the club has selected defenseman Tristan Bertucci as the 7th-overall pick in the 2021 OHL Priority Selection Draft presented by Real Canadian Superstore.

Bertucci, a native of Vaughan, Ontario, played with the Toronto Marlboros U15 in the GTHL during the 2019-20 season. The 6-foot-2, 180-point defenseman is known for his great skating abilities and ability in the offensive zone.

“It’s a dream come true to be drafted into the Ontario hockey league,” Bertucci said. “I’ve been waiting for this all my life and I’m over the moon excited and honoured to be drafted by the Flint Firebirds. I’m excited to get started.”

As for the remainder of the draft, the Firebirds looked to add depth across the board, while getting bigger as a team as well. After a year lost due to the COVID-19 pandemic, the hardships in scouting players coming into the draft were evident. The Firebirds were as prepared as anyone, regardless of the situation.

“This year was a very unusual draft,” Christensen said. “But we feel that we were able to acquire a very talented group of players.”

The Firebirds rounded out Day 1 going with D-man James Petrovski, C Ethan Hay and G Nathaniel Day. From there, four of their next five picks were forwards before drafting their second goalie of the day, Cooper Rautenstrauch. They ended the draft by selecting four D-men in their final six picks.

“Our focus was to bolster our defense, acquire some goaltending depth, and add some size to our forward group,” said Christensen. “I feel that our scouts did an outstanding job of doing that.”

More information on the Firebirds’ draft can be found in the OHL Draft Central.

About the Ontario Hockey League:

About The Flint Firebirds:
The Flint Firebirds are a proud member of the prestigious 20-team Ontario Hockey League. The OHL is one of three leagues that constitute the 60-team Canadian Hockey League (CHL), which is known as the world’s premiere player development league for the NHL. On NHL opening day rosters in October, 70% of NHL players were CHL alums. Since the Firebirds’ inception in Flint, Michigan five seasons ago, the team has produced 19 NHL signed or drafted players. More than 250 scouts representing all 31 NHL clubs attended a Firebirds.