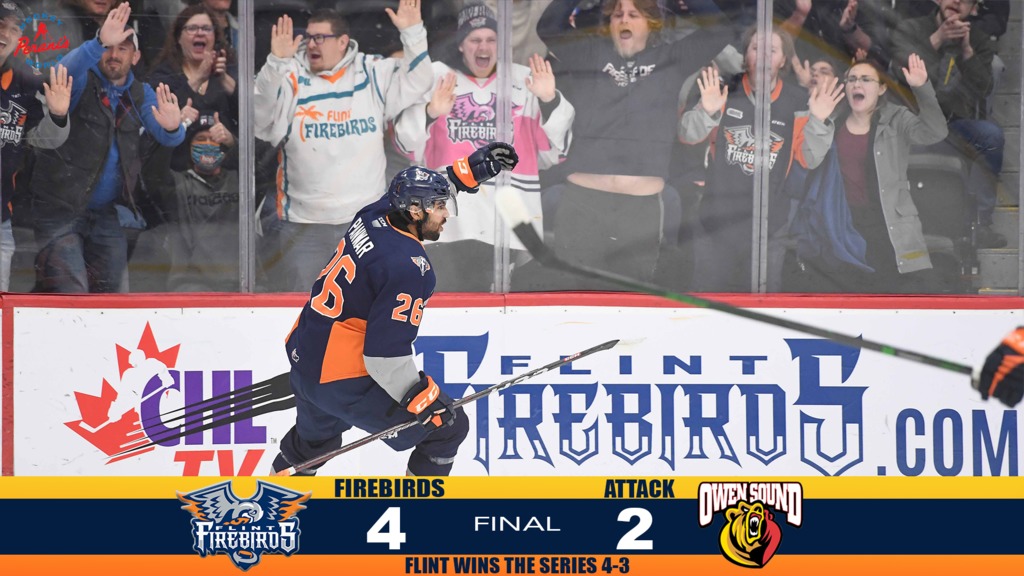 Flint, Mich. – The Firebirds emerged victorious from the first round of the postseason with a 4-2 triumph over the visiting Owen Sound Attack at the Dort Financial Center Wednesday. Luke Cavallin posted 34 saves on 36 shots for his fourth playoff victory, and was named the game’s ‘Third Star.’ Braeden Kressler (Toronto Maple Leafs) was the game’s ‘First Star’ after recording two goals and an assist. Sahil Panwar earned ‘Second Star’ honors after being the first to light the lamp for Flint in the contest. Ethan Keppen (Vancouver Canucks) and Brennan Othmann (New York Rangers) also found twine for Flint. Colby Barlow scored both Attack goals, and Nick Chenard made 31 saves on 34 shots faced.

Both clubs scored once in the opening frame. First, at 5:05, Colby Barlow traversed the bottom of the left-wing circle with possession and attempted to lift a backhander from just above the crease. Cavallin kicked the puck to his left, but Barlow gathered his own rebound and lifted it high just inside the far post for his fourth of the playoffs. Julian Fantino and Cedrick Guindon assisted on the tally.

Then, just past the eight-minute mark and while on the penalty kill, Braeden Kressler (Toronto Maple Leafs) cleared the puck from his defensive end right to the alert Sahil Panwar charging through the neutral zone. Panwar was two strides ahead of the nearest defender, and he used a series of forehand-to-backhand moves before lifting the puck high to the glove side for his second of the postseason.

First-period shots ended 12-10 to Flint’s advantage and the Attack won more faceoffs by a margin of 10-6. Both teams had one power-play opportunity but neither squad converted.

The Birds scored the lone marker of the second period at 13:58. Amadeus Lombardi won an offensive zone face-off back to Kressler, who quickly generated a shot on goal. Chenard stopped the initial shot but sent the rebound to his right where Ethan Keppen redirected it into the back of the net. Keppen’s goal was his fourth of the series.

Flint outshot the Bears 10-9 in the middle stanza and won more faceoffs by a 15-7 margin. Flint again finished scoreless with a chance on the man-advantage.

Just under two minutes into the third period, Gavin Hayes emerged on what looked to be a breakaway up the center of his offensive zone. He was hauled down from behind, and the official had his arm in the air for a delayed tripping call. From a seated position on the ice, Hayes was able to slide the puck back to Brennan Othmann at the right hash marks, and he used just enough hesitation to beat Chenard far side over the right pad at 1:55 for his fourth of the playoffs.

The Attack called Chenard to their bench for the extra attacker near the 18:15 mark. They used their timeout at the next whistle. However, Braden Kressler collected a loose puck in the neutral zone and skated to the top of the right circle before sending it into the empty cage and bringing the Flint crowd to their feet. Kressler’s second of the postseason was logged with 58 seconds remaining in regulation.

Final shots on goal favored the Attack 36-35 and they held the edge in faceoffs 31-27. On special teams, Flint finished 0-for-5 with the power play and held Owen Sound scoreless on one chance with the extra body.