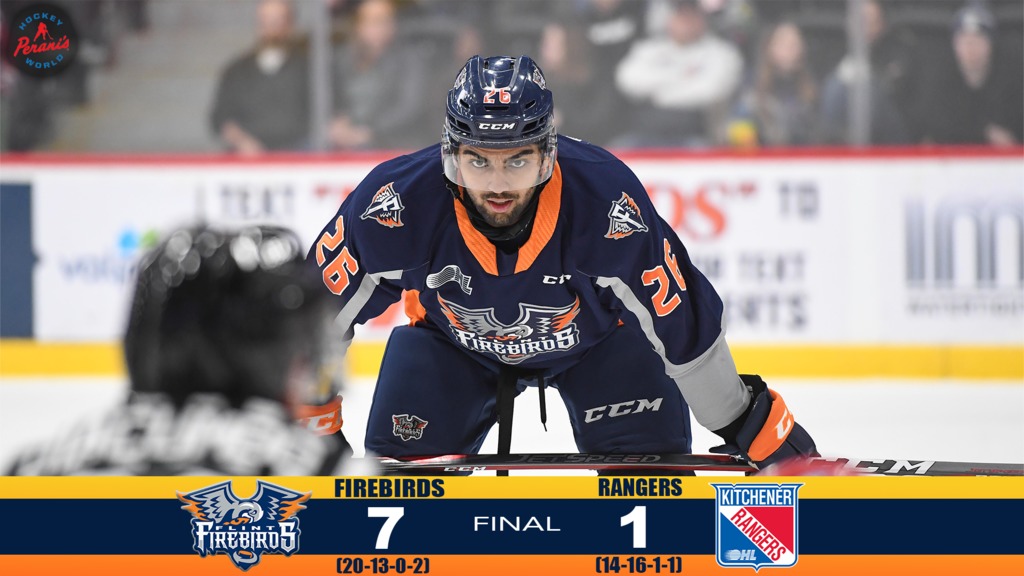 Flint jumped out to the early 1-0 lead on a nifty give-and-go in the offensive zone. Gavin Hayes fed Sahil Panwar as he rocketed up the right-wing side of the zone. Panwar found Tag Bertuzzi between the circles, and Bertuzzi hit Panwar back in stride for a wide-angle one-timer that slipped behind Parsons’ blocker and the near post for his seventh of the season at 7:45.

That lead doubled less than a minute later. Brennan Othmann (New York Rangers) made a short backhand pass at the right point to the late man, Luca D’Amato. The Maple, ON native wound back and fired on Parsons. While the initial shot was stopped, the puck remained in the crease and Riley Piercey was first to find it and knock it home for his 15th of the campaign at 8:43.

The Birds’ third goal came off another rebound at close range. This time Panwar controlled the puck with a pair of Kitchener defenders draped all over him. He somehow still managed to generate a shot on Parsons that was kicked aside with the left pad. Tag Bertuzzi was first on the scene for a tap-in, which was his eighth of the season at 13:50. Gavin Hayes picked up the second helper on the tally.

Flint then converted on their first power-play opportunity of the night to take the 4-goal lead into the locker room. The Birds set up in the zone and cycled the puck well, making several crisp passes before attempting a shot. The eventual shot came from Othmann at the right-wing faceoff dot, off the setup pass from Tyler Deline. Immediately, three Flint players crashed the net, and Panwar’s stick was first on the scene to redirect the puck in near-side from Parsons’ left. Panwar’s second goal of the night was his eighth of the season and third with the man-advantage, recorded at 17:31.

First-period shots favored the Firebirds 14-9, and the home team outdrew the visiting Rangers 14-10 in the opening 20 minutes. Flint scored on their only power-play chance and killed their lone penalty successfully.

Bertuzzi set up the game’s fifth goal with a nice up-ice pass through the neutral zone to Ethan Keppen. Keppen carried across the blue line and between the circles with a defender draped all over him but was able to muscle his way to the slot before lifting a short-range wrister that struck twine blocker-side at 11:39.

Kitchener finally got one past Cavallin at 13:05 of the middle frame. Mike Petizian took the initial shot that was kicked aside by Cavallin’s left pad, but his teammate Carson Rehkopf was in place to one-time the rebound just inside the right post for his ninth of the season. Navrin Mutter was credited with the second helper.

The teams combined for five minor penalties in the second period, with an uptick in physicality on both ends of the ice. Kitchener outshot the Birds 15-10 in the frame, and second-period draws ended 12-6, advantage Flint. Both teams went scoreless with the man-advantage, with Kitchener earning two attempts and the Firebirds earning one.

Shortly after another power-play opportunity expired for Flint, Samuel Assinewai stopped a clearing attempt by the Rangers at the right point and slipped a short pass to Ethan Hay. Hay earned the attention of the defender and then returned the puck to Assinewai along the left-wing boards. Assinewai snapped the puck from the half boards and Parsons appeared to have the save, but the puck trickled across the goal line. It was Assinewai’s fourth of the season, assisted by Hay at 10:44 of the third.

Ethan Keppen potted the game’s final marker at 18:18, again using his size to protect the puck with another strong individual effort. On a one-on-one charge through the offensive zone, he shook his defender and sniped a shot over Parsons’ left shoulder from along the left-wing wall. It was his second of the night and fifth in just nine games since returning to the Firebirds from the American Hockey League (AHL).

Flint finished 1-for-6 on the power-play and kept Kitchener off the scoreboard on six chances with the man advantage. The Birds outdrew the Rangers 40-27 and outshot them 36-30.

Next Up: The Firebirds will travel to Sault Ste. Marie, Ont. Friday for a pivotal West Division battle with the first place Soo Greyhounds before returning home Saturday to host the Sarnia Sting. Puck drop is scheduled for 7 p.m. (ET). Tickets are on sale NOW here: ETIX.