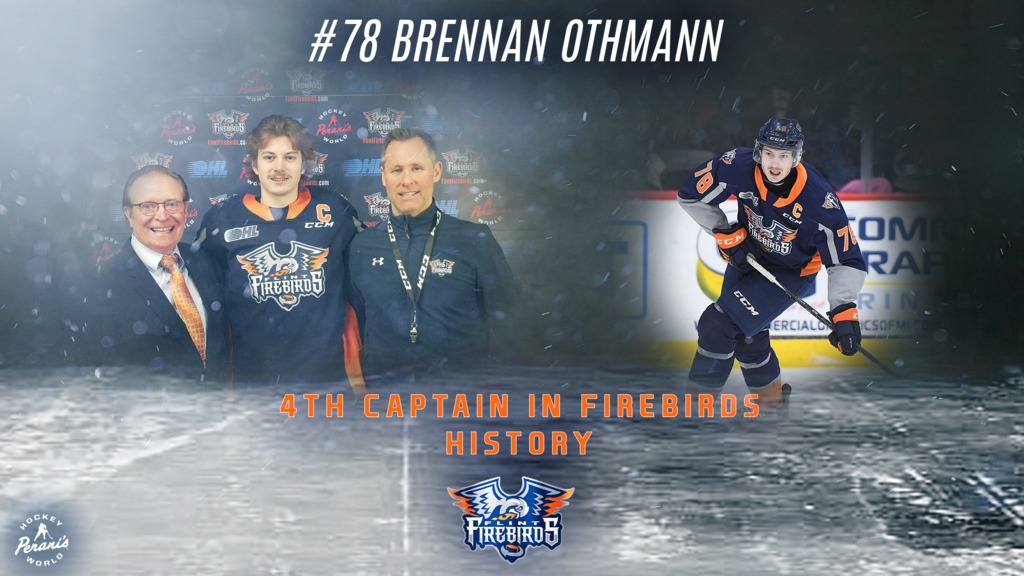 Flint, Mich. – The Flint Firebirds announced today that Brennan Othmann has been named the 4th captain in Firebirds history.

“Obviously it’s a tremendous honor to be named the captain here in Flint,” Othmann said. “To follow in the footsteps of Delly (Ty Dellandrea) is special. I’m appreciative of the coaching staff, front office and of course my teammates for trusting and believing in me to step up in this role.”

“Brennan has evolved into the leader of this team,” Head Coach Ted Dent said. “The way he plays and competes every single night is exactly what we’re looking for in the culture we’re trying to create here in Flint. We feel it’s the right time to put the ‘C’ on a player who fits the mold of what a captain should be.”

The Scarbrough, Ont. native was selected 16th overall in this past summer’s NHL Draft by the New York Rangers after spending the 2020-21 season playing pro hockey for EHC Olten (Swiss). He also spent last year with Team Canada, helping them win gold at the U18 World Junior Championships where he produced six points (3 G, 3 A) in 7 GP.

“We are very happy for Brennan (Othmann) that he has been selected as the captain of the Flint Firebirds,” President of Hockey Operations Terry Christensen said. “It’s something that he has worked hard to earn and we believe his leadership can propel us to bigger and better things.”