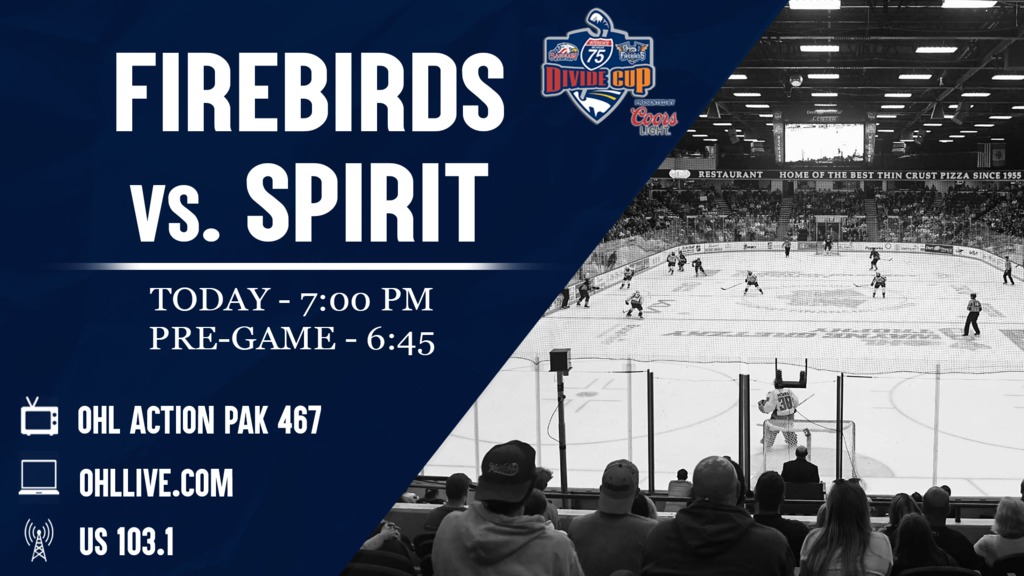 Tonight’s game is the sixth of eight meetings between these teams this season and is the third of four games to be played in Flint. The Firebirds won the first match 7-2 on the road in October. Since then, Saginaw has won four straight. The first team to win five games in the series will claim the coveted I-75 Divide Cup, presented by Coors Light. In the case of a 4-4 tie in the series, goal differential will determine the winner. Saginaw currently holds the tiebreaker with a 23-18 advantage in total goals. Flint’s all-time record versus the Spirit stands at 24-31-1-3 with a 10-15-1-3 mark on home ice. A single goal has been decided in 14 games between these in-state rivals.

Braeden Kressler leads all Firebirds with four goals and four assists against Saginaw this season. Gavin Hayes is second with six points (3 G, 3 A), followed by Coulson Pitre with five (2 G, 2 A). The Spirit has been led by Dean Loukus with five goals and three assists against Flint. Zayne Parekh (4 G, 1 A), Michael Misa (3 G, 2 A), and Calem Mangone (2 G, 3 A) are tied for the second-most points against the Firebirds in the campaign.

On special teams, the Firebirds are 16th on the power play with a 20.1% conversion rate. Saginaw has scored 23.0% of the time on the man-advantage, good for sixth. When shorthanded, Flint’s killing penalties at a rate of 77.6% which is 12th-best in the league. The Spirit rank third on the penalty kill with an 81.7% success rate overall.

Amadeus Lombardi tops the stats for Flint with 51 total points, stemming from 23 goals and 28 assists through 41 games this season. Gavin Hayes ranks second in point total at 42, and he’s tied for the ninth-most goals in the OHL with 24. Defenseman Dmitry Kuzmin sits third with nine goals and 30 assists for 39 total points. He ranks fourth among all OHL defensemen for points and assists. Newcomer Nolan Dann has logged five points (3 G, 2 A) in only four games since joining the Firebirds, including two goals in last night’s victory over the Soo Greyhounds.

Sophomore defender Tristan Bertucci is expected to play in his 100th OHL contest this evening. After picking up a pair of assists last night, Bertucci now has three tallies plus 22 helpers in the campaign and 12 points in his last 12 games played.

The Spirit are led on the scoresheet by “Exceptional Status” rookie Michael Misa, who turns 16 years of age next month. He tops the roster in goals (20), assists (25), and total points (45) in 35 games played. Misa also sits atop the entire rookie class in the league in all three categories, plus power-play goals (5) and a points-per-game average (1.29). Calumet, Mich. native Dean Loukus is second with 15 tallies and 24 helpers through 40 contests. Sitting third is Hunter Haight with 35 total points (12 G, 23 A). The rearguards are led by hometown hero Mitchell Smith, who hails from Saginaw, with six goals and 21 assists in the campaign.

Between the pipes, fourth-season netminder Tristan Lennox has backstopped the Spirit in 30 games. He now has 17 victories including two shutouts. Lennox has a 3.17 goals-against average (GAA) with a save percentage (SV%) of .884. Shelby Township, Mich. native Andrew Oke has posted six victories in ten games, logging a 3.24 GAA and a SV% of .883.

This evening’s contest against the Saginaw Spirit can be heard live on the radio throughout Flint & Mid-Michigan on US 103.1 FM, online at www.us103.com, or by downloading the US 103 app here. Jack Sznewajs will call the play-by-play action on the Firebirds Hockey Network (FHN), starting with the pre-game show at 6:40 p.m. (ET).

Next Up: The Flint Firebirds will host their first-ever Family ‘FUN’day Sunday S.T.E.A.M. Day versus the Erie Otters tomorrow afternoon. Get two FREE kids tickets (ages 12 & under) for every ONE paid adult admission, valid at the Dort Financial Center Box Office Only. Starting at 3:00 p.m. when the doors open there will be science, technology, engineering, art, and mathematic activities or demonstrations that will be set up around the concourse for children and families to participate in. Children (17 & under) who partake in all of the activities & demonstrations will receive a FREE S.T.E.A.M. Day puck for their participation, while supplies last. S.T.E.A.M. Day would not be possible without the support of the following organizations: Kettering University, First Robotics, YMCA Camp Copneconic, Math4Flint, and the Flint & Genesee Literacy Group. All other tickets for Sunday’s game can be found at ETIX HERE.