Flint, Mich. – Get tropical with the Flint Firebirds next Saturday, Feb. 16 when the club takes the ice for the forth-annual “Flint Tropics Night.” Puck drop is set for 7 p.m. (ET) against the Owen Sound Attack.

Inspired by the movie “Semi-Pro” starring Will Ferrell, the Firebirds will be wearing special themed jerseys, pants and socks throughout the game that are sure to impress everyone in attendance. Immediately following the game, there will be a live jersey auction, giving fans an opportunity to take home the game-worn Flint Tropics jersey of their choice. Proceeds will be donated to the Firebirds Charitable Foundation which benefits local youth organizations throughout Flint, Genesee County and Mid-Michigan. Additionally, the first 750 fans through the doors will receive Firebirds’ branded sunglasses! 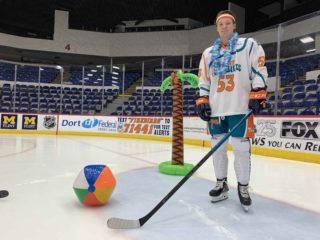 About The Flint Firebirds:
The Flint Firebirds are a proud member of the prestigious 20-team Ontario Hockey League. The OHL is part of the Canadian Hockey League (CHL), which is known as the world’s premiere player development league for the NHL. On NHL opening day rosters in October, 70% of the players were CHL alums. Since the Firebirds’ inception three seasons ago, the team has produced 15 NHL signed or drafted players. The Firebirds average nearly 3,000 fans per game at the Dort Federal Credit Union Event Center, reaching over 100,000 fans each OHL season.