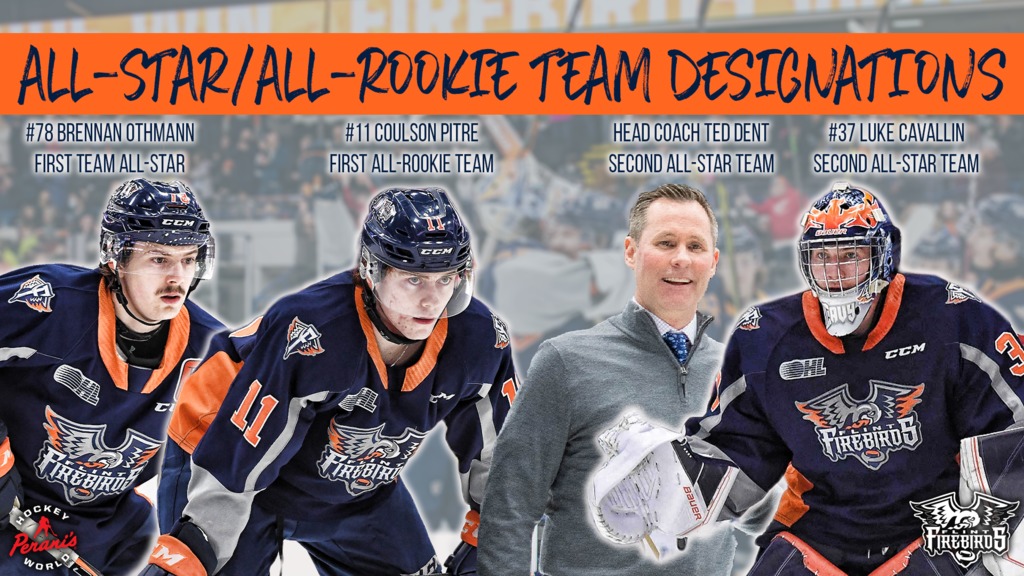 Captain Brennan Othmann was a First All-Star Team selection after setting franchise records in both goals (50) and points (97). The first-round draft pick of the New York Rangers finished second in the league in goals, tied for fifth in power-play goals and seventh in points. Othmann becomes the first Firebird in franchise history named to the First All-Star Team after being named to the First All-Rookie Team after the 2019-20 season.

Cavallin led the OHL in wins with 36, five more than the next closest goalie. He was one of the stories of the OHL playoffs, finishing with a league-high .929 SV%. The overager, who recently signed with the Toronto Marlies (AHL),  leaves Flint with 12 new franchise records to his name including single-season GAA and SV%. He’s the first goaltender in franchise history named to an All-Star Team.

Head Coach Ted Dent coached the team to new franchise records for wins (42), points (89) and goals scored (286) in his first year behind the bench. In doing so, Dent was named the Western Conference nominee for OHL Coach of the Year. Additionally, Dent becomes the first coach in Firebirds history given an All-Star team designation.

Rookie Coulson Pitre was the final honoree as he was named to the First All-Rookie Team. The 2023 NHL Draft-eligible winger produced 0.85 points per game, which ranked 3rd among all OHL rookies and set a new franchise record for goals by a rookie in a season with 23. He becomes the second player named to the First All-Rookie Team in franchise history joining captain Brennan Othmann (2019-20).

The Flint Firebirds’ return to action for the 2022-23 season is set for Saturday, October 1 at 7:00 p.m. against the Niagara IceDogs.