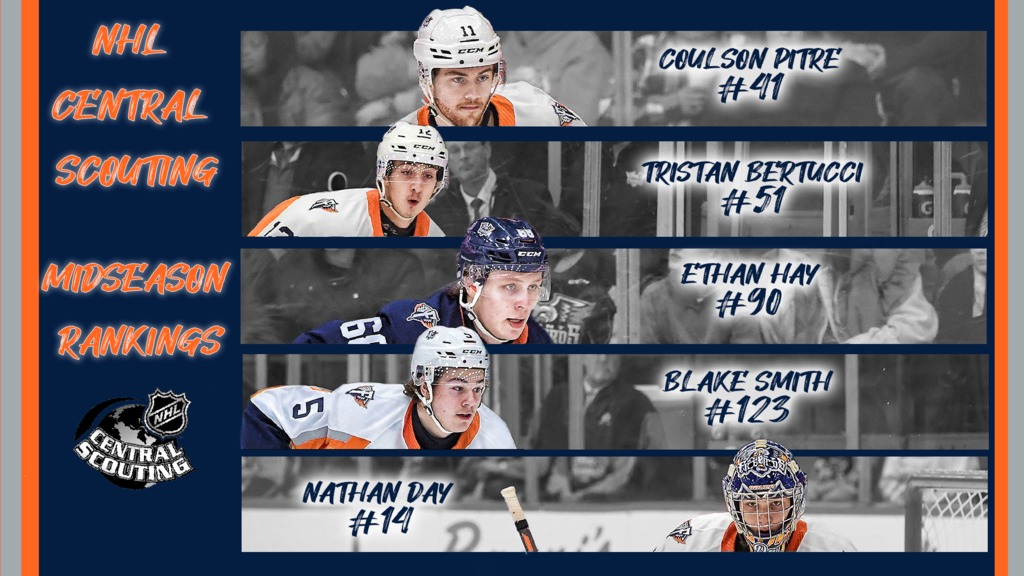 Flint, Mich. – NHL Central Scouting came out with their midterm 2023 NHL Draft rankings today and a Firebird record five players were ranked on it.

Coulson Pitre led the way for the Firebirds coming in at #41 for North American skaters. In 86 career GP with Flint, Pitre has 36 G and 38 A. He set the franchise record for goals scored by a rookie last season with 23 and currently has 30 Pts in 34 GP this season with the Birds.

Tristan Bertucci made the biggest jump of any Firebird, checking in at #51 for North American skaters. Bertucci was the Firebirds 1st round pick (#7 overall) in the 2021 OHL Priority Selection. The Vaughan, Ont. native checks in with 4 G and 31 A in 96 career GP with Flint in his career.

Ethan Hay rounded out the Firebirds forwards, ranked #90 for North American skaters. The second-year center has 8 G and 8 A in 38 GP while winning 53.4% of faceoffs this year. In his rookie season, Hay led the OHL with four shorthanded goals scored, also tying the Firebirds’ single-season franchise record.

Rounding out the Firebirds skaters was newly acquired defenseman Blake Smith who came in at #123 for North American skaters. Despite playing in just 14 games for Flint, Smith has established himself as a steady shutdown blue-liner. Smith has 5 Pts in 88 career GP in time with the Firebirds and Oshawa Generals.

Nathan Day finished up the five Firebirds as the 14th-ranked North American goaltender. The second-year netminder is 5-5-0 for the season, impressing scouts along the way. Day for his career has a .852 SV% and 4.39 GAA.

The 2023 NHL Draft is set to take place on June 28-29 at Bridgestone Arena in Nashville. The Flint Firebirds have had at least one player taken in every draft since their inception in 2015 and despite having multiple players selected in five of the last seven, have never had three players selected in one draft.

Next up for the Firebirds: The Firebirds continue the current five-game road trip with Sudbury and North Bay this weekend. Flint returns home next weekend for back-t0-back home games. First, on Saturday, January 21 when they host the Saginaw Spirit for another installment of the I-75 Divide Cup, presented by Coors Light. Puck drop is set for 7:00 p.m. and tickets for the January 21 home game are available now from ETIX HERE.

Sunday, January 22 is a Family ‘FUN’day game against the Erie Otters at 4:00 p.m. Get two FREE kids tickets for every paid adult admission available any time leading up to the game at the Dort Financial Center Box Office only. The Firebirds will have various S.T.E.A.M. (Science, Technology, Engineering, Art and Mathematics) activities on the concourse during the game. Children 17 & under that complete or visit all activity booth activities around the concourse will receive a special prize for their participation at the guest services table. Supporting organizations that will be present on S.T.E.A.M Day: YMCA Camp Copneconic, Kettering University, and Math4Flint.