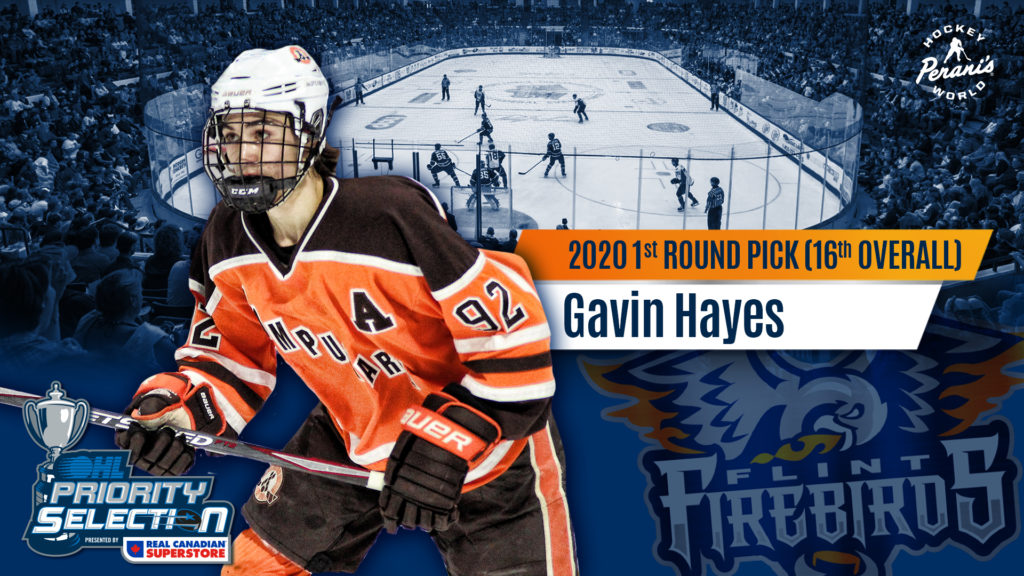 Flint, Mich. – The Flint Firebirds announced today that the club has selected forward Gavin Hayes as the 16th-overall pick in the 2020 OHL Priority Selection presented by Real Canadian Superstore.

Hayes, a native of Westland, Mich., led the prestigious High-Performance Hockey League (HPHL) in both goals (16) and points (33) in just 21 league games with the Detroit Compuware U15 AAA hockey team this year.

“We’re very proud and excited to be welcoming Gavin to the Flint Firebirds organization,” said Flint Firebirds Vice President of Hockey Operations and General Manager Barclay Branch. “Gavin is a smart and highly skilled Michigan-born player. He’s a strong skater that brings speed and skill to our line up. He will be a great addition to the hockey club and has a chance of being a dominant player in this league.” 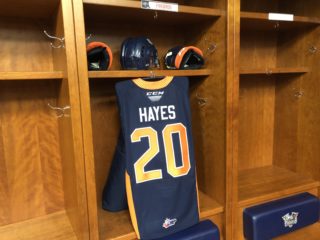 The 6-foot-1, 160-pound skater placed third among more than 630 players at the U15 World Selects Invitational in Philadelphia, Penn. last June, recording 16 points (6G, 10A) in just nine games with Team East Coast Selects. In July, he was selected among the best American-born hockey players to compete at the renowned 2019 USA Hockey Boys Select 15 Player Development Camp in Amherst, New York. Hayes is a prospect eligible for the 2022 NHL Entry Draft. Hayes was tabbed as an assistant captain for the last two consecutive years with Compuware. He also tallied an impressive nine points in five games at the 2019 Chipotle-USA Hockey Youth Tier I 14U National Championships in Pittsburgh, Penn.

“Gavin brings size to our club and has a power-forward type mold but can play in all areas of the ice,” said Flint Firebirds Assistant General Manager and Director of Player Development Joe Stefan. “He plays a full 200-feet, knows the game real well and has an attitude that is second to none. He played on arguably one of the top-five teams in North America at their age group and was a top player on that team. Most importantly, he wants to be a Flint Firebird.”

HockeyProspect.com: Hayes is a skilled winger who plays a very strong all-around game. He plays fast and with a lot of energy and does great job leading by example. He is an incredibly hard worker and does not lose many battles. He has very quick hands and the ability to create offense on any given shift. He is strong skater with plenty of speed and quickness to skate with the puck. Hayes has a long reach, a strong center of gravity and is good at protecting the puck.

“It doesn’t really feel true that I was able to be drafted by Flint,” said Hayes. “I never really thought this day would come. When I’ve been to Firebirds games in the past, you can tell the fans are really educated and into the game. The locker room was identical to a NHL locker room. I don’t really know how to put it into words. It’s every kid’s dream to play in the OHL and I’m glad to be a Firebird.”