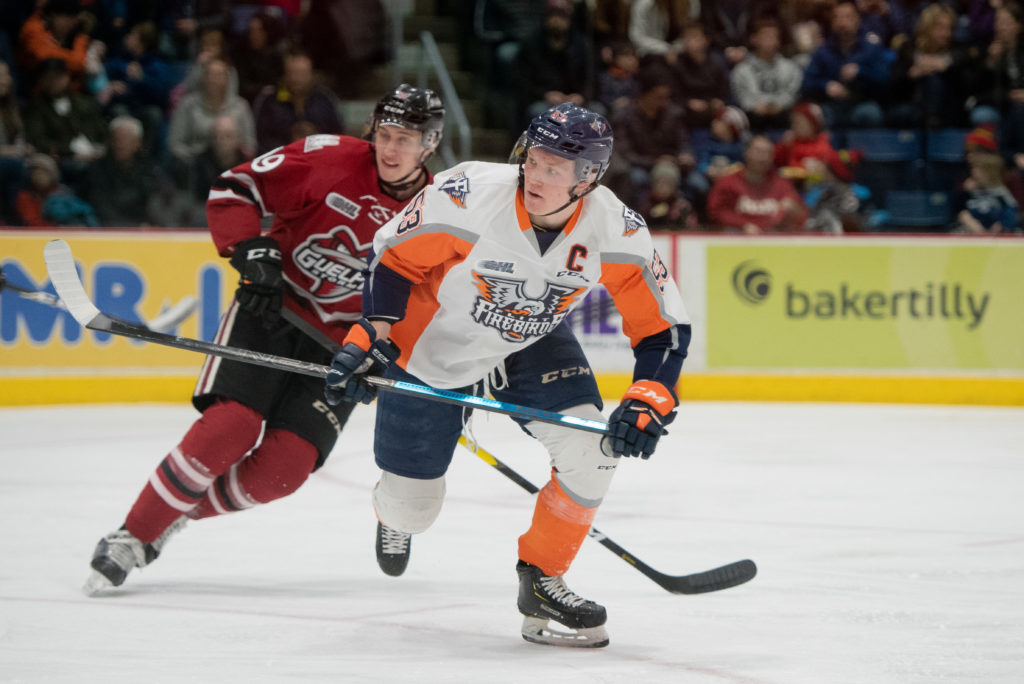 Guelph, Ont. – The Flint Firebirds will begin their first of four preseason games when the club faces-off against the Guelph Storm Saturday night. Puck drop is set for 7 p.m. (ET) at the Sleeman Centre (capacity 4,715) in Guelph.

In the regular season, all-time, the Firebirds are 8-5-3-0 against the Storm. In away contests, Flint holds a record of 4-3-1-0 versus Guelph. The last time Flint was in Guelph was on Feb. 18. where the Storm earned a 5-4 victory in front of a sell out crowd of 4,726 fans. Cody Morgan recorded his first-career OHL hat trick, scoring three goals in the contest, Ethan Keppen recorded a three-point game and Dennis Busby and Jack Wismer earned two point games.

Guelph began their preseason last night on the road in Mississauga. The Storm were shutout 4-0. Owen Bennett made 19 saves on 22 shots and Tanner Wickware made 15 saves on 16 shots.

Flint Firebirds (0-0-0-0, 1st West Division):
With the start of preseason, players to watch tonight are four incoming first-year players Jack Harper, Braeden Kressler, Brennan Othmann and Evgeniy Oksentyuk. Othmann was selected by the Firebirds in the first-round, 2nd overall, of the 2019 OHL Draft. Kressler was picked in the second-round. Belarus native Oksentyuk was tabbed in the first-round of the CHL Import Draft and defenseman Jack Harper was picked in the seventh-round of the 2018 OHL Draft.

Dellandrea is the Firebirds leading returning scorer from a season ago. He posted 63 points (22G, 41A) in 60 games. The leading returning defenseman is Riley McCourt who notched 32 points (6G, 26A) in 47 games.

Broadcast Coverage:
There will be no live radio or television coverage for Saturday evening’s contest. However, throughout the regular season, all 68 games can be heard live on the radio throughout Flint & Mid-Michigan on US 103.1 FM, online at www.us103.com or by downloading the US 103 app here. Dominic Hennig will call the play-by-play action with pre-game coverage beginning 30 minutes prior to puck drop.

Next Home Game:
The Firebirds will play one home preseason game against their in-state rival, the Saginaw Spirit, on Saturday, Sep. 14. Puck drop is set for 7 p.m. (ET) at the official practice facility of the Firebirds, Iceland Arenas. Flint’s regular season home opening night is on Saturday, Sep. 28 when the club hosts the Niagara IceDogs at the Dort Federal Credit Union Event Center.