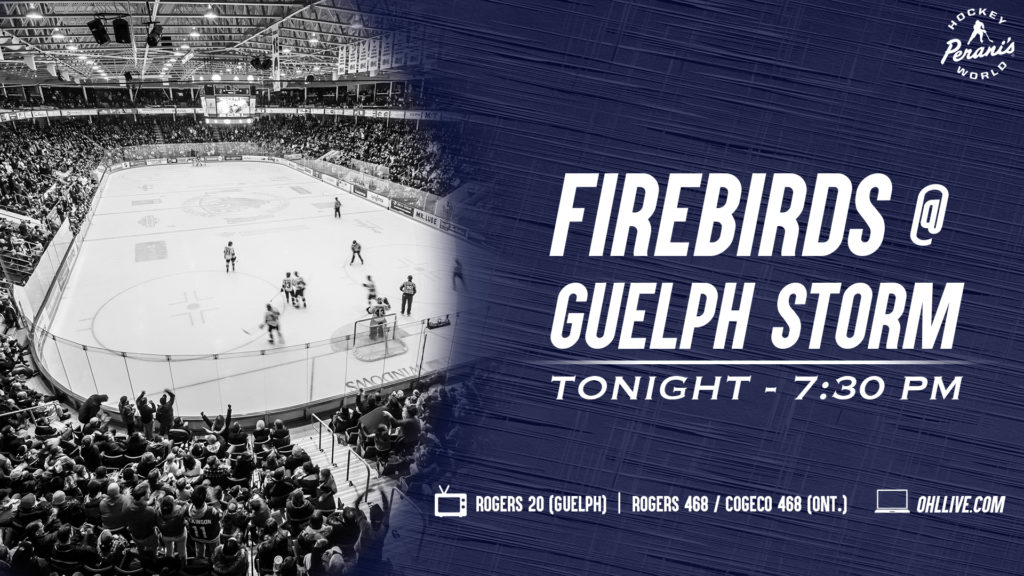 Guelph, Ont. – The Firebirds traveled to Guelph, Ont. Thursday for a Friday contest against the defending OHL champion Guelph Storm. Puck drop is set for 7:30 p.m. (ET) at the Sleeman Centre (capacity 4,715) in Downtown Guelph.

Flint enters Friday’s contest on a three-game winning streak. After dropping the first contest of the campaign to the Soo Greyhounds on the road, the ‘Birds defeated the Spirit in Saginaw before sweeping both home games last weekend against the Niagara IceDogs and Sarnia Sting. The Storm dropped their first game in a shootout to the 67’s on the road in Ottawa before earning their lone victory over the Owen Sound Attack on home ice. In their third contest, the Attack defeated the Storm in a shootout in Owen Sound.

Most recently, Flint posted an 8-5 victory over the Sarnia Sting on home ice Sunday afternoon. Evan Vierling led the ‘Birds in scoring, logging one goal and two assists. Ethan Keppen (Vancouver Canucks) scored twice, and Ty Dellandrea (Dallas Stars), Vladislav Kolyachonok (Florida Panthers) and Riley McCourt all had two points in the contest. Luke Cavallin made his first start in net this season and made 35 saves on 40 shots for his first win of the campaign.

Left after practice today for Guelph. Bags are open, gear is drying. @bschroedy33 and I will be back tomorrow morning to setup for practice. We can’t leave anything in the hallway overnight as it is a public rink. #Firebirds #birdsarehot #OHL pic.twitter.com/2mVvEzk2C0

Guelph last played on Saturday, defeating the Owen Sound Attack 4 – 0 at the Sleeman Centre. Andre Bakanov, Ben McFarlane, Keegan Stevensen and Eric Uba scored for the Storm. Third-year netminder Nico Daws made all 28 saves needed for his first shutout of the season.

Friday night marks the first of four regular-season meetings between these clubs this campaign, and the first of two in Guelph. All-time, Flint holds a record of 5-9-2-0 against the Storm. In road games, the Firebirds are 4-3-1-0. Last season, Flint went 0-3-1-0 in series, with a 0-1-1-0 record away from home.

On this ice this morning for pregame skate in Guelph pic.twitter.com/GtctVcuJ2J

The last time these two teams met was August 31 in the both teams’ first pre-season tilt. Flint skated away with a 7 – 5 victory, with Riley McCourt and Brennan Othmann leading the way for the Firebirds with two goals each. Ty Dellandrea finished with four assists in his only pre-season contest with Flint before heading off to Dallas for training camp and NHL pre-season games.

On special teams this season, the Firebirds are killing penalties at a rate of 73.7%, which is 11th-best in the OHL. Guelph’s penalty-killers rank 14th at 72.7% efficiency through three games. With the man-advantage, the Storm and Firebirds sit tied for 17th each scoring at a 15.4% clip.

Flint Firebirds (3-1-0-0, 4th West Division):
Second-year forward Evan Vierling and newcomer Evgeniy Oksentyuk are tied with six points each. Vierling’s four assists are the most by any player on the club and Oksentyuk’s two goals and four helpers also pace the way. Veteran forward Jake Durham leads the ‘Birds in goals-scored with four, which are tied for sixth-most in the OHL. In total, Durham has five total points and is tied with returning forward Connor Roberts, who has two goals and three assists.

Vladislav Kolyachonok (Florida Panthers) leads the defensive unit with a goal and three assists each through four games. Dennis Busby (Arizona Coyotes) has three helpers for three points, ranking second among the rearguards.

First-year forward Brennan Othmann scored his first career OHL goal in Saginaw in the second game of the season. He now has two goals, which has him tied for second among all OHL rookies.

Between the pipes, former Guelph Storm netminder Anthony Popovich makes his first return to Guelph after being acquired in a trade by the Firebirds and has appeared in three of Flint’s four games this season. Along with two victories, he’s posted the 10th-best goals against average (GAA) in the OHL at 2.92 (GAA) and thee fourth-best save-percentage (SAV%) of .916. Luke Cavallin made his first appearance in Sunday’s 8 – 5 victory over the visiting Sarnia Sting. He holds a 5.00 GAA and a SAV% of .875.

Guelph Storm (1-1-0-1, 5th Midwest Division):
Guelph defenseman Danil Chayka (0G, 3A) and rookie Andrei Bakanov (2G, 1A) lead the Storm with three points each. Behind them is a four-way tie for third with two points, consisting of Cam Hillis (Montreal Canadians) with two assists, Pavel Gogalev and Eric Uba, each with a goal and an assist, and Keegan Stevenson with a pair of goals.

In goal, Nico Daws has appeared in two games. His .971 save-percentage (SAV%) and 0.96 goals-against average (GAA) are both first among netminders who have played two full games this season. Freshman goaltender Owen Bennett has played in one game and posted a .929 SAV% with a 3.02 GAA.

Broadcast Coverage:
Friday evening’s contest against the Guelph Storm is one of f0ur games on the 68-game slate this season that will not be broadcast on the radio in Mid-Michigan. The rest of the season, Firebirds’ games can be heard live on the radio throughout Flint & Mid-Michigan on US 103.1 FM, online at www.us103.com or by downloading the US 103 app here. Dominic Hennig will call the play-by-play action on the Firebirds Hockey Network (FHN).

All Flint Firebirds home and away games throughout the 2019-20 season can be watched anywhere in the world online on www.ohllive.com or on the OHL Live app. OHL Live is a league video streaming platform that delivers high quality live and on-demand coverage of all regular season and playoff games annually. The cost is $6.99 (CAD) / $5.25 (USD) per game, $69.99 for Flint Firebirds away games only, $149.99 for all 68 home and away Firebirds games and $179.99 for all 1,360 OHL games throughout the 2019-20 season. 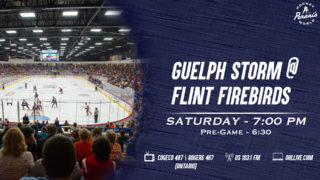