Guryev Scores Game Winner in Firebirds Debut, Cranley Shuts the Door in 2-1 Win Over the Greyhounds 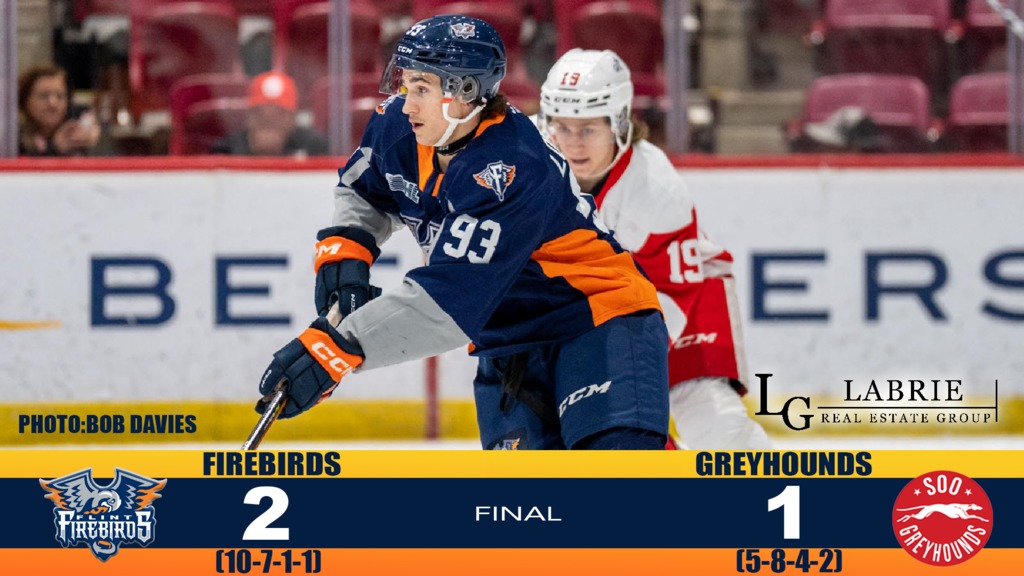 Sault Ste. Marie, Ont. – The Firebirds defeated the Soo Greyhounds 2-1 on the road Wednesday. Artem Guryev (San Jose Sharks) scored his first goal of the season in his first game with Flint. Braeden Kressler (Toronto Maple Leafs) potted the other tally for the Birds, and now has 10 goals and 15 total points in just 11 games this season. Will Cranley (St. Louis Blues) posted 23 saves to earn his seventh win of the year. Charlie Schenkel backstopped the Hounds, and made 29 saves on 31 shots faced.

There first 19 minutes of the first period were a bit irregular for these two teams that played a mildly physical, low-shooting affair in a quick first period. Everything changed in the 20th minute, however. First, Flint took the first penalty of the contest at 19:11. Then, less than 20 seconds later, two Firebirds emerged on a two-on-one shorthanded breakaway, with Dmitry Kuzmin (Winnipeg Jets) carrying the puck up the left-wing side. His late pass across the slot set up Braeden Kressler for the tap-in from Schenkel’s left. The goal was Kressler’s tenth of the season, logged at 19:32.

First-period shots ended at 8-6 to Flint’s advantage. The Hounds outdrew the Birds by a margin of 8-4.

The second period added all the elements that the opening frame seemed to lack. Physicality increased from the puck’s drop, shots were getting through traffic to the netminders, and a pair of worthy combatants dropped their gloves in the fifth minute. Two more players got fed up with one another and another spirited fray happened near the midway point of the second.

About a minute later, Amadeus Lombardi (Detroit Red Wings) rocketed up the left side of the ice, leaving two defenders behind as he carried around the corner and in behind the Soo net. From the far side of the cage, he set up the newest Flint player Artem Guryev between the circles. The ensuing one-timer beat Schenkel low to the glove side for Guryev’s first goal of the season and first point in a Firebirds’ jersery at 11:36. Lombardi and Daks Klinkhammer drew the assists. It was Klinkhammer’s first career OHL point.

The Birds led 2-0 after 40 minutes. They outshot the Hounds 16-12 in the center stanza, but Sault Ste. Marie again controlled the faceoff circle, although by a narrower margin of 13-12. Neither team converted on their power-play chances, with Flint going scoreless on one chance and the Hounds going 0-for-2.

With 2:06 remaining on the game clock, the Greyhounds finally got one past Cranley with a point shot through traffic. Caeden Carlisle pulled the puck off the left-wing wall and hit Jordan D’Intino at the near point. The sophomore winger walked the line to the center of the zone before firing into traffic. The puck found its way low to the left pad of Cranley for D’Intino’s fifth of the season.

Sault Ste. Marie would use their timeout, then pull Schenkel to the bench near the 18-minute mark. Flint attempted two shots on the empty net, but one sailed wide and the other rang off the right post. The Hounds had a few shots on Cranley in the waning minutes, but he was up to the test. The Birds held on for the 2-1 victory.

Final shots were 31-24, advantage Flint. The Greyhounds outdrew the Firebirds 30-26. Neither team had an opportunity with the man advantage in the final 20 minutes of play.

Next Up: The Firebirds will play back-to-back games versus the London Knights this weekend. First, the clubs will meet at Budweiser Gardens in London, Ont. on Friday night. The rematch on Saturday returns to the Dort Financial Center for a 7:00 p.m. (ET) opening puck drop. Tickets for Saturday’s home contest are available now from ETIX HERE.