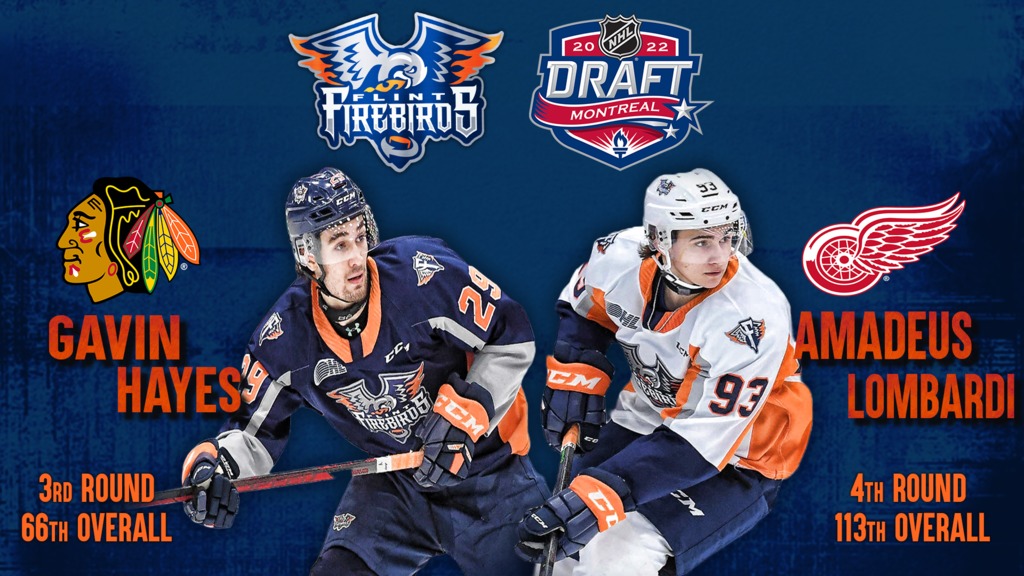 Flint, Mich. – For the fifth time in seven seasons since the move to Flint in 2015, the Firebirds have had multiple players taken in the NHL Draft as Gavin Hayes (Chicago) and Amadeus Lombardi (Detroit) were selected today in Montreal.

“We are so happy for Gavin and Amadeus,” GM and Head Coach Ted Dent said. “Both young men are great hockey players but also great people. I really enjoy working with both of them and helping them develop into professional hockey players in the near future.”

Gavin Hayes was selected as the first pick in the 3rd round (#66 overall) by the Chicago Blackhawks.

“Right when I heard ‘from the Flint Firebirds of the OHL’ my heart stopped,” Hayes said. “I am super honored to be drafted by such a great organization.”

The 6-foot-2 LW set franchise rookie records in a single game and season points and assists this season, finishing the year with 19 G and 30 A. His 49 points were 4th on the team and 10th among all OHL rookies. The Firebirds 1st round pick in the 2020 OHL Priority Selection draft also finished 3rd among rookies for OHL playoff points (12) and goals (5).

Hayes becomes the first Michigander selected in the NHL Draft while wearing a Firebirds uniform.

Next up, forward Amadeus Lombardi was selected in the 4th round (#113 overall) by the Detroit Red Wings, becoming the first Firebird to ever be drafted by the Red Wings while being a member of the team.

“It’s a dream come true,” Lombardi said. “I still don’t think it’s really hit me yet. I’m so happy and excited to be drafted by such a prestigious organization like the Red Wings and I can’t wait to get started.”