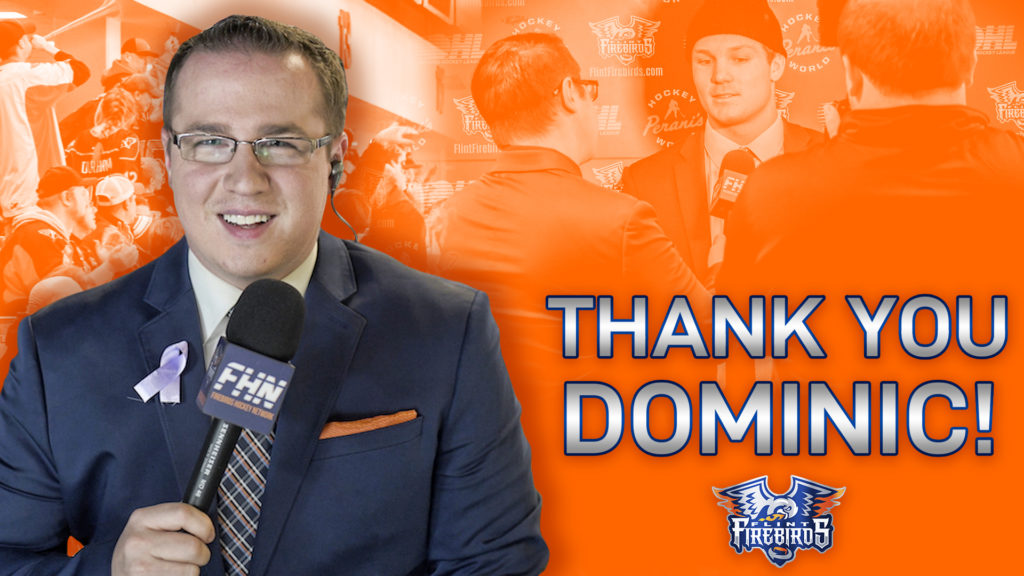 Flint, Mich. – The Central Collegiate Hockey Association (CCHA) has named Dominic Hennig, who has served the past six years as the voice of the Flint Firebirds, the league’s Director of Strategic Communications and Brand Advancement.

With the CCHA, a NCAA Division I men’s ice hockey conference, Hennig will grow and expand the CCHA brand, develop a strategic digital and social plan, handle all communications efforts, and facilitate television partners and media relations.

“We would like to congratulate Dominic on being selected as the Director of Strategic Communications and Brand Advancement for the CCHA,” said Flint Firebirds President Jeremy Torrey.  “Dominic has a passion for the CCHA and these opportunities do not come around very often.  We know he will do a fantastic job for the conference.  On behalf of the Flint Firebirds owner Rolf Nilsen, staff and our fans, we would like to thank Dominic for his service to the organization and our community.  He has been a Firebird since our inception in 2015 and has played an integral role in growing our brand.  We will miss him, but we are excited for him and the next chapter of his career.”

Hennig comes to the CCHA after spending the past six years as the Director of Broadcasting & Communications for the Flint Firebirds in the Ontario Hockey League (OHL). Throughout his career, Hennig has called nearly 600 hockey games on radio or television over the past 12 consecutive years. In his time with Flint, he was responsible for the team’s broadcast contracts, press releases, player appearances, digital media content, and the club’s website, FlintFirebirds.com. He played a key role in the club’s transition from Plymouth to Flint in 2015, developing a program from the ground up, while conceptualizing the Firebirds’ communications & media relations departments.

“I’m forever grateful to the Flint Firebirds for giving me the opportunity to broadcast hockey at a high level over the past six years,” said Hennig. “I sincerely enjoyed my time here and am thankful for the great relationships and people I was able to meet along the way. I would like to thank the City of Flint and Genesee County for an unforgettable experience. I wish the Firebirds franchise and Flint, Michigan success moving forward.”

Dominic and his fiancé Nicole plan to relocate to Macomb, Mich. in the Metro-Detroit area this summer.