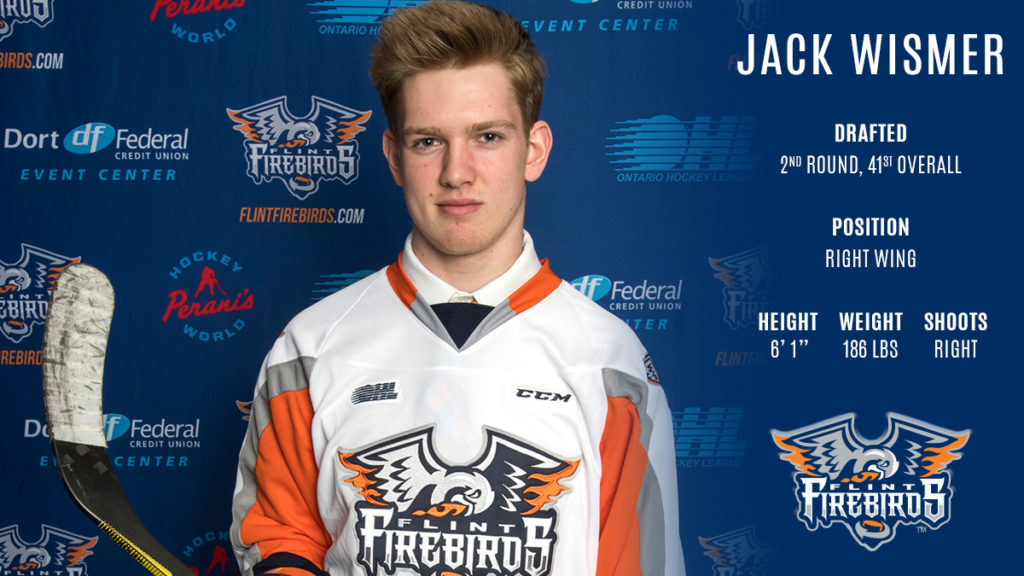 With the signing, Flint has now received a commitment from nine of their last top-10 draft picks, representing the top five drafted players in both of the previous two OHL Priority Selections.

“As a Firebirds’ draft pick from the 2016 OHL Priority Selection last April, receiving a commitment from Jack and his family this year is a real positive for our program,” said Flint Firebirds General Manager Barclay Branch. “Jack has a high-degree of hockey sense. He’s shown at every level that he makes good things happen with the puck, he’s smart and he makes the players around him better. He’s got a lot of positive elements to bring to our program and that excites us.”

Wismer, a native of Stoney Creek, Ont., earned 51 points (19G, 32A) in 35 games during his minor midget year with the Hamilton Jr. Bulldogs in the South Central Triple A (SCTA) league. This season, the 6-foot, 187-pound right-winger averaged a point-a-game playing junior hockey with the Ancaster Avalanche in the Greater Ontario Junior Hockey League (GOJHL). Wismer tallied 17 points (5G, 12A) in 17 games in the regular season before notching six points in nine playoff games with the Avalanche.

“To have the chance to play in the OHL means a lot to me,” said Wismer. “It’s an elite level to be at, it’s what you train and practice for your whole career. Flint is a great place, the atmosphere around the hockey is amazing, the fans are crazy and it’s nice to finally be here. I’m going to make the most of it with this opportunity.”

Jack was also one of 45 OHL players invited to Canada’s national under-17 development camp in Calgary, Alta. last summer.

The Firebirds’ training camp will take place Monday, Aug. 28 through Wednesday, Aug. 30. The camp will be held at the Firebirds’ official practice facility, Iceland Arenas, on Elms Rd. in Clayton Township and is open to the public with free admission for all on-ice sessions.

Season ticket packages for the Flint Firebirds 2017-18 season are on sale now and can be purchased at the Dort Federal Event Center Box Office, Monday through Friday from 9 a.m. to 5 p.m. (ET). Season ticket holders receive FREE parking this season. For ticket information, contact Kevin Mays, Director of Ticket Sales at (810) 201-6903 or kevin@flintfirebirds.com.