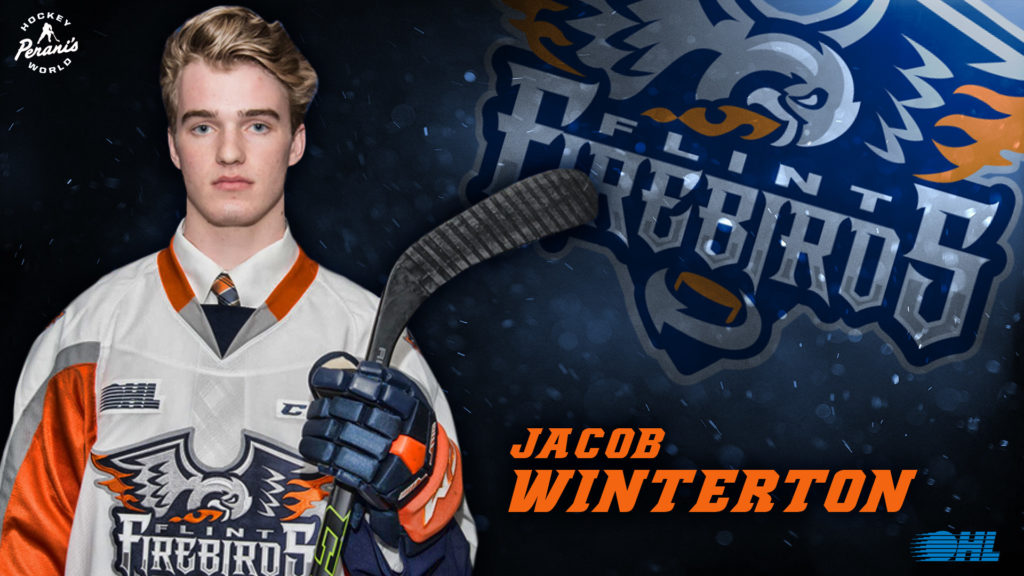 Winterton, a native of Brooklin, Ont., led the prominent 23-team Midget Ontario Minor Hockey Association (OMHA) with 33 goals scored during the 2017-18 regular season. In total, he recorded 52 points (33G, 19A) in 33 games with the Ajax/Pickering Raiders Midget AAA Hockey Club.

“We are very happy and excited to announce that Jacob and his family have committed to our organization,” said Flint Firebirds Vice President of Hockey Operations and General Manager Barclay Branch. “Jacob is an outstanding person and an exciting young hockey player. He possesses both speed and skill and has a high compete level, which will translate to our club moving forward.”

Winterton was selected by the Firebirds in the 10th-round (189th overall) of the 2017 OHL Priority Selection after garnering 33 points (13G, 20A) in 33 games played with the Ajax/Pickering Raiders Minor Midget AAA Hockey Club during the 2016-17 season.

“I was ecstatic when I got the call to join the Firebirds,” said Winterton. “It’s a very high class organization. They treat every player with respect as if their players are the first priority. You feel like a pro as soon as you step foot in the arena.”

In four games at the 2017 OHL Cup, Winterton averaged a point-per-game, tallying one goal and three assists. Additionally, Jacob led Team OMHA White in points at the 2017 OHL Gold Cup, scoring two goals and adding two assists in five games. He also played in two contests with the Pickering Panthers of the Ontario Junior Hockey League (OJHL) during the 2017-18 season.

“I’ve been to Firebirds games and have seen their fan base,” added Winterton. “The atmosphere is energetic, the fans are supportive and I’m looking forward to playing in front of them next year. I’m excited to get started and arrive to Flint for training camp.”

The Firebirds’ training camp will take place Monday, Aug. 27 through Wednesday, Aug. 29. The camp will be held at the Firebirds’ official practice facility, Iceland Arenas, and is open to the public with free admission for all on-ice sessions. Stay tuned to www.FlintFirebirds.com for more information on the upcoming NHL Draft and Training Camp.