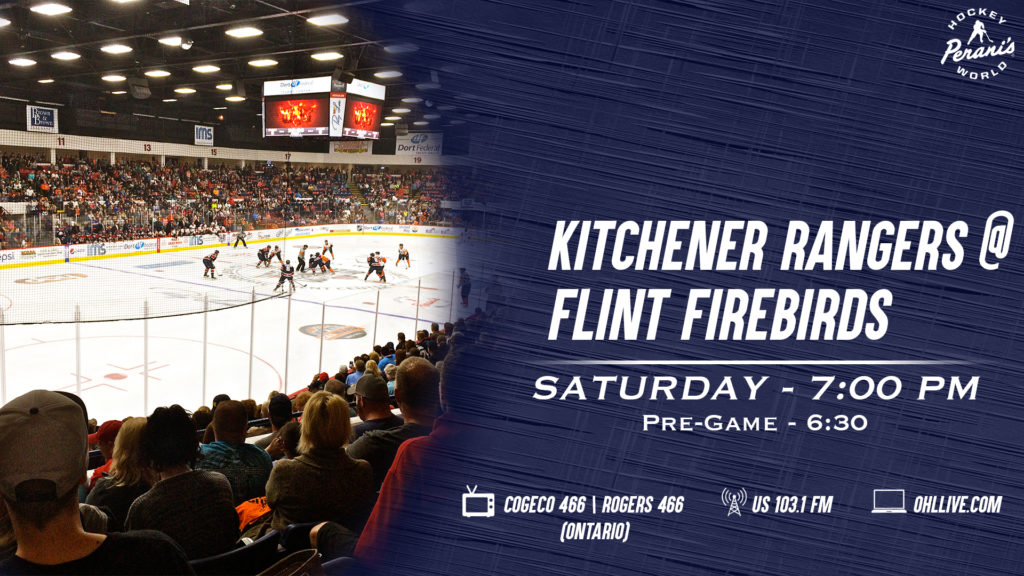 The Firebirds have now won a record six consecutive games and earned points in eight of their last nine. Kitchener enters the contest atop both the Midwest Division and the ten-team Western Conference with a record of 29-11-5-2. Flint sits third in the West Division and fifth in the Western Conference with a 28-17-1-1 record. On home ice this season, the Birds are 16-8-1-0 compared to the Rangers away record of 11-6-3-2. In their past ten games, Flint has gone 7-2-0-1 and Kitchener has gone 8-0-2-0.

Saturday marks the second of four meetings between the two clubs this season, and the first of two in Flint. All-time, Flint holds a record of 6-9-2-0 versus the Rangers, however the ‘Birds have only defeated them once on home ice. Flint went 2-2-0-0 in the series last season, and held a record of 1-1-0-0 in home games.

The last time these teams met was October 18 in Kitchener. Florida Panthers’ prospect Vladislav Kolyachonok scored the game-winning goal 2:00 into overtime to lift the Flint Firebirds (6-3-0-0) to a 4-3 victory in front of 6,472 fans at the Kitchener Memorial Auditorium. With the win, Flint snapped Kitchener’s home undefeated streak of five games. Ethan Keppen (Vancouver Canucks), Riley McCourt and Cody Morgan each recorded two-point games. Anthony Popovich made 27 saves on 30 shots between the pipes.

Of note, Kitchener’s General Manager Mike McKenzie relieved Jay McKee from Rangers’ head coaching duties on Nov. 25 after a 7-10-4-0 start. McKenzie took over as interim head coach and has the Rangers have posted an impressive 22-1-3-0 record since.

The first 500 fans will receive a free Firebirds branded slap bracelet compliments of PFCU! Wear your 90’s gear and dress for the decade for a chance to win great prizes, there will be a Double Dare style physical challenge during the first intermission, and of course somebody will be slimed!

Special video clips from the 90’s including 90’s themed music and many more fun and entertaining elements will take place throughout the night! In addition to celebrating the 90’s, two Firebirds will also be celebrating their birthdays Saturday. Forward Cody Morgan turns 19 and defenseman Owen Lalonde turns 20 on the same day, February 1.

Flint Firebirds (28-17-1-1, 3rd West Division):
Ty Dellandrea (Dallas Stars) tops the stat sheet for Flint with 28 goals and 32 helpers for 60 points in 37 games-played. In the past six games Dellandrea has recorded 18 points (10G, 8A). Dellandrea is also tied for the second-most insurance goals (5) and the third-most game-winning goals (6). Belarusian forward Evgeniy Oksentyuk sits second on the club with 22 goals and 30 assists for 52 points in 42 contests.

Riley McCourt scored his first career hat-trick Friday night, including the eventual overtime game-winner. He holds several franchise records among defensemen, including most goals in a single season (16) and most career goals (26) and career points (91). For the season, McCourt ranks third in total offense with 16 goals and a team-high 34 assists for 50 total points in 47 games. His total points are fourth-most among OHL rearguards, his 16 tallies are third, and his 34 helpers are tied for fourth. McCourt also has the fourth-highest points-per-game average among blue-liners at 1.06.

Overage forward Jake Durham is ranks fourth on the squad with 18 goals and 28 assists. He already owns the record for most games-played by any Flint Firebirds’ player (249). Durham ranks third all-time in goals-scored for the franchise with 71. Ryan Moore is the former Firebird who ranks second (behind Dellandrea) with 72.

Brennan Othmann leads the freshman class for the ‘Birds with 24 total points (11G, 13A) through 39 games. His point-total is tied for eighth among rookies in the league, his 11 goals are seventh-most, and his 13 helpers are tied for tenth. Othmann needs just two more goals to tie Dellandrea for most-ever by a Firebirds’ rookie.

In net, Anthony Popovich has played in 33 games this season. He’s earned 19 victories, which are the most by any Flint netminder in a single season and the sixth-most in the OHL this year. Popovich’s goals-against average (GAA) is 3.71 and he has the ninth-best save-percentage (SAV%) in the league at .898. Luke Cavallin already has a career-high nine wins in 18 appearances and carries a 3.65 GAA and a .895 SAV%.

Kitchener Rangers (29-11-5-2, 1st Midwest Division):
Riley Damiani (Dallas Stars) leads the Rangers in assists (39) and total points (59) through 46 games-played. Jonathan Yantsis ranks second on the club with 49 points, including a team high 32 tallies. He sits tied for seventh in the OHL for total goals-scores. Greg Miereles (Florida Panthers) is third with 47 points (23G, 24A) in 37 games. His five short-handed goals are tied for third-most in the league this season.

Axel Bergkvist (Arizona Coyotes) tops the defense with five goals and 31 helpers through 47 games. Declan McDonnell tops the Rangers’ freshman class with 29 points (11G, 18A) in 47 contests. He is tied for the third-most points, seventh-most goals and fourth-most assists among all first-year players in the OHL this season.

In net, Jacob Ingham (Los Angeles Kings) has played in 32 of the Rangers’ games thus far. He is credited with 23 victories and carries the league’s fourth-lowest goals-against average (GAA) of 2.72 and the second-highest save-percentage (SAV%) of .923. Only one goalie has more wins in net than Ingham this season. Lucas Pfeil has played in 14 contests, picking up six wins and earning a 3.66 GAA and a .874 SAV%.

Broadcast Coverage:
Saturday evening’s contest can be heard live on the radio throughout Flint & Mid-Michigan on US 103.1 FM, online at www.us103.com or by downloading the US 103 app here. Firebirds’ broadcaster Dominic Hennig will call the play-by-play action and Jack Sznewajs will provide color commentary on the Firebirds Hockey Network. Radio pre-game coverage begins 30 minutes prior to puck drop at 6:30 p.m.