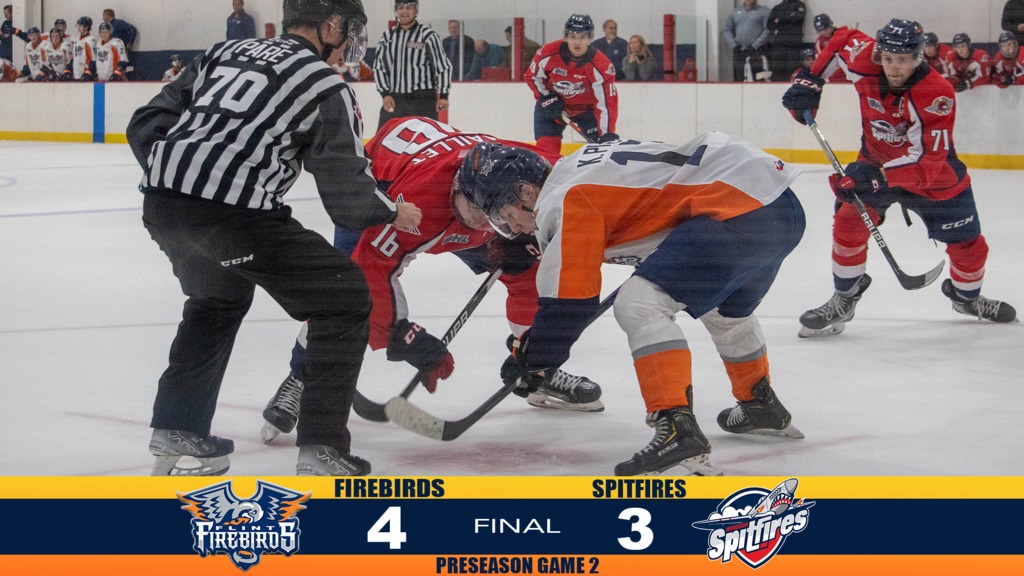 Flint, Mich. – The Firebirds hosted the Windsor Spitfires at a packed Flint Iceland Arena Sunday afternoon in their second preseason match of the year. Returning sophomore goaltender Nathaniel Day got the start in goal for the Birds, while Spits went with their rookie netminder Kyle Downey. James Petrovski led the offensive charge for the young Firebirds’ squad by scoring twice. Luca D’Amato (1 G, 1 A), Coulson Pitre (2 A), and Tristan Bertucci (2 A) also finished with a pair of points. Between the pipes, Day turned aside 37 of the 40 shots faced for the exhibition win.

The crowd at Iceland didn’t have to wait long for a good reason to be excited. After winning the game’s opening faceoff back to his defenders, Zacharie Giroux sprung free on a breakaway against Downey. He was tripped up from behind before he could get his shot away, resulting in a penalty shot only nine seconds into the game. Giroux made a nice fake in the slot, but his lifted backhand attempt was kicked aside by the Spits’ netminder.

The first tally of the contest came from Christopher O’Flaherty on a Windsor power play. After a rebound laid to rest just outside of Day’s reach atop the Flint crease, O’Flaherty was first to see the opportunity and sent it just beyond Day’s left pad for his first of the pre-season. Josh Currie and Anthony Cristoforo assisted on the power-play marker, logged at 9:17 of the opening frame.

The Firebirds were awarded a second penalty shot past the midway point of the frame, but this time Downey blockered it aside against rookie forward Nathan Aspinall. With less than five minutes remaining before the first intermission, Owen Pitters launched a shot from the right point into traffic. The puck bounced around in the slot for a moment before James Petrovski found it and buried it behind Downey for his first in exhibition play at 15:25. Coulson Pitre picked up the second assist. The final big event of the opening frame was at 17:34 when newcomer Reed Gee and Windsor’s AJ Spellacy dropped the mitts for a spirited bout in front of the Firebirds bench. Both combatants were done for the day per the OHL officials.

Early in the second period, Anthony Cristoforo launched a heavy slapper on Day from the top of the right-wing circle, and the initial save was made. The rebound, however, hit the back of a defender in front and bounced its way back across the goal line to give the Spitfires a 2-1 lead. Cristoforo was credited with his first of the pre-season at 3:30 of period two, assisted by Jacob Maillet and Ethan Miedema.

The Birds battled back and tied the contest just beyond the six-minute mark of the middle stanza. Newcomer Nathan Aspinall forwarded a pass to Alex Bradshaw at the bottom of the right circle. Aspinall shot low and Downey kicked the rebound to his right, where Petrovski redirected the puck behind the netminder for his second of the afternoon at 6:24.

As the second period wound down near the 17-minute mark, Ethan Miedema carried up the right-wing boards of Flint’s zone and cut around his defender toward Day. Miedema’s shot from the slot was kicked back toward the right circle, where Jackson McLlwain made a second attempt. This time the rebound went to Colton Smith on the doorstep for the redirection, his first of the postseason scored at 16:54.

Flint would tie the contest on another goal off a rebound. This time, Daks Klinkhammer was at the bottom of the left-wing circle and received a rebound off the initial shot from Luca D’Amato. He took two quick swings before the puck crossed into the cage on the blocker side for his first of the pre-season at 13:25. D’Amato combined with Tristan Bertucci for the helpers.

After a brief 5-on-3 advantage for the Firebirds, the power-play unit got the job done during the remaining 5-on-4. Luca D’Amato was centered high between the circles and teed up a pass from Tristan Bertucci. The slap shot he released slipped just under the crossbar on Downey’s blocker side to put Flint on top 4-3 with 2:45 remaining in regulation.

Windsor pulled Downey with under two minutes remaining, but to no avail. The Birds held on for a 4-3 triumph. In the end, Flint outshot the Spits 44-40. Windsor outdrew the Firebirds 35-30. On special teams, Flint scored once on five power-play chances while killing off five of six penalties taken.

Next Up: The Firebirds return to Windsor for one more exhibition tilt versus the Spitfires on Tuesday, September 20 at 7:05. Then they’ll play a pair of games versus the Saginaw Spirit to conclude the 2022 Pre-Season. The first of two contests will be played in Saginaw on Friday, September 23 at 7:05. Flint’s final pre-season tilt will return to Flint Iceland Arena on Saturday, September 24. General Admission tickets are only $10 each and parking is free. Puck drop is set for 7:00 p.m. (ET) on the 24th.