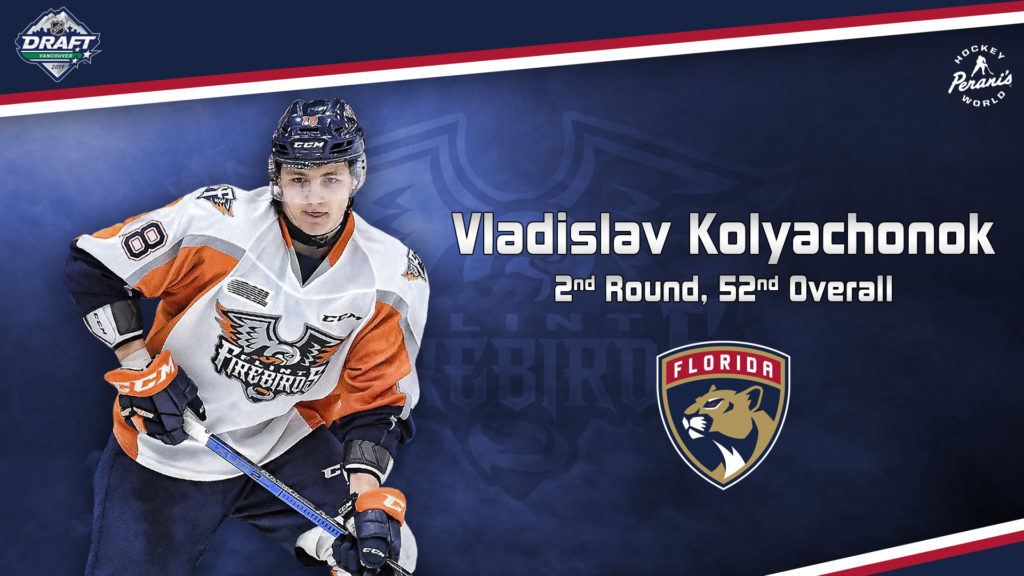 Vancouver, B.C. – The Florida Panthers selected Flint Firebirds defenseman Vladislav Kolyachonok in the second-round, 52nd overall, of the 2019 NHL Entry Draft Saturday, making him the sixth Flint Firebird to be drafted in the National Hockey League in just four seasons.

Kolyachonok, a 6-foot-1, 185-pound native of Minsk, Belarus, finished second among all rookie defenseman in the OHL this season, setting a record for most points by a rookie in a Firebirds’ uniform with 30 points (4G, 26A) in 54 games. He was the first ever Flint Firebird to be named to the Ontario Hockey League’s (OHL) First All-Rookie Team for the 2018-19 season.  Along with earning the honor on the league level, he was tabbed as Flint’s ‘Best Defenseman’ at the end-of-year Firebirds’ player awards banquet.

On the international level, Kolyachonok was named captain of Belarus’ National Men’s Under-18 Team for the 2019 IIHF World Championship in Sweden where he finished second on his team and third among all defenseman in the tournament with five points (1G, 4A) in six games.

Rounds 2-7 continues Saturday on the NHL Network in the United States and on Sportsnet and TVA Sports in Canada.