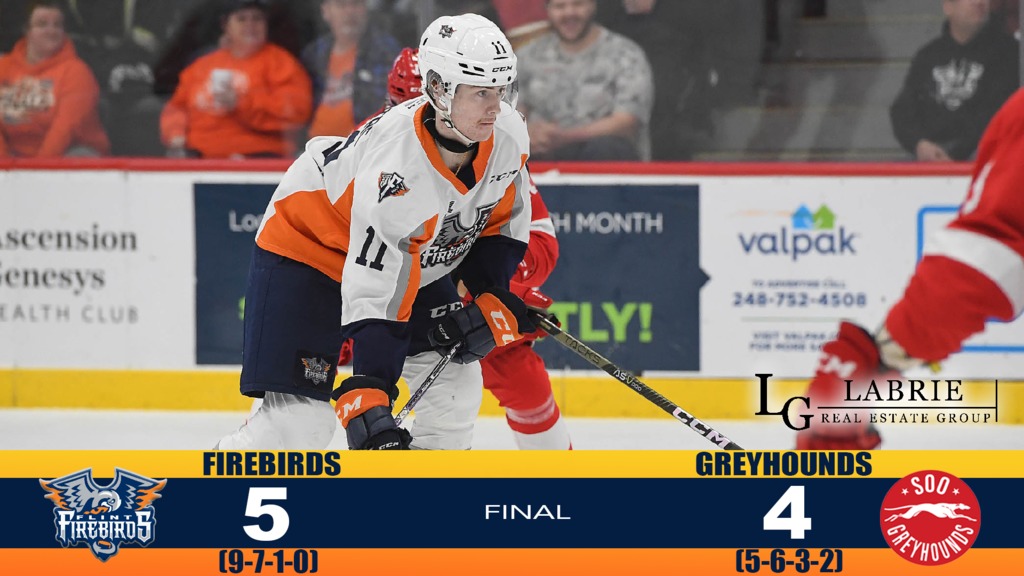 Flint, Mich. – The Firebirds saw an early two-goal lead slip away before Braeden Kressler (Toronto Maple Leafs) broke a late tie with the game-winning tally, earning ‘First Star’ honors for his two-point (1 G, 1 A) effort. Three defensemen scored for Flint, including Tristan Bertucci who was named the game’s ‘Second Star’ with two points (1 G, 1 A) of his own. The Greyhounds were led by Bryce McConnell-Barker’s two-goal performance. Will Cranley (St. Louis Blues) got the start in net for the Firebirds, and it was Samuel Ivanov who made his eighth appearance between the pipes for the Hounds. Cranley picked up his sixth victory with a 29-save performance, while Ivanov turned aside 37 shots.

A pair of Flint defenders gave the Firebirds an early 2-0 lead. First, it was Tyler Deline launching a shot into traffic from the right point and then crashing the net to chase down his own rebound. From between the hash marks he buried the puck blocker-side for his second of the season at 2:34. Simon Slavicek and Alex Bradshaw combined for the assists on the tally.

Less than two minutes later, Dmitry Kuzmin (Winnipeg Jets) thwarted a Greyhounds’ clearing attempt at the blue line and sent the puck across the zone to Deline on the right side. Deline fed Braeden Kressler (Toronto Maple Leafs) at the right-wing half boards as Kuzmin pressed in on the play. Kressler saucered a pass across the circles, and Kuzmin quickly faked a pass back to freeze the goaltender before lifting a backhander under the crossbar for his second of the year at 4:17.

Sault Ste. Marie went on the power play two minutes after Kuzmin’s marker, and New York Rangers’ prospect Bryce McConnell-Barker scored off a wrist shot from atop the left circle at 6:35. It was his eighth goal of the campaign, assisted by Kirill Kudryavtsev (Vancouver Canucks) and Kalvyn Watson.

With under a minute remaining in the first period and both teams in the midst of line changes, Marko Stojkov saw Tristan Bertucci all alone up the left-wing boards and hit him with a pass in stride. Bertucci stickhandled to the bottom of the left circle before sniping a wide-angle wrister that struck twine far-side just under Ivanov’s glove. Bertucci’s second of the season was logged at 19:10. Riley Piercey added the secondary assist and in doing so picked up his 100th career point in a Firebirds uniform, becoming the ninth Bird in history to do so.

Flint led 3-1 after 20 minutes of play and held the advantage on the shot clock 17-11. The Birds also outdrew the Hounds 12-7. On the power, Sault Ste. Marie went 1-for-1 while the Firebirds were scoreless on their only opportunity.

The Greyhounds received another power-play opportunity beyond the five-minute mark of the middle frame, and this time they were able to put a flurry of shots on Cranley. Flint’s netminder made several highlight-reel saves during the two-minute minor to help the penalty kill get the job done and preserve the two-goal lead.

The Soo pulled back within a single goal at the 14:01 mark on an even-strength goal from Tyler Savard. Mark Duarte made the setup pass from behind the Flint net to Savard low in the left circle. He lifted a shot just over Cranley’s right shoulder for his third of the season, with helpers from Duarte and Justin Cloutier.

Neither team converted on their one power-play chance in the middle frame. Shots ended even at 14 per team. Faceoffs favored Flint 18-7.

The Firebirds began the third period with a carryover man advantage, and capitalized for a 4-2 lead at 1:22. Tristan Bertucci passed across the offensive zone to Amadeus Lombardi (Detroit Red Wings) at the top of the left-wing circle. Lombardi carried to the center of the circle before lifting a wrister just over Ivanov’s blocker near-side for his seventh of the campaign, assisted by Bertucci and Coulson Pitre.

Then the Greyhounds scored a pair of goals over the next five-and-a-half minutes. First, Daylen Moses carried in front of the penalty boxes and across the blue line before leaving the puck for a streaking winger. Jordan D’Intino picked up the puck and cut to the middle of the zone before wristing it low to the glove side for his third of the season at 4:49. Moses and Caeden Carlisle combined for the assists. Next, Bryce McConnell-Barker potted his second of the evening during a four-on-four play at 6:39. The assists were credited to Carlisle and Watson.

The score remained tied and some bad blood resurfaced as several players needed to be separated after whistles late in the game. When the Birds were about to go on another power play inside the final four minutes of the game, Head Coach Ted Dent elected to use his timeout. Shortly after play resumed, Kuzmin faked a slapper from the right point and instead opted to pass to Kressler inside the left circle. Kressler’s one-timer lit the lamp at 16:59 for his ninth of the season, assisted by Kuzmin and Lombardi.

The Greyhounds would use their timeout moments later, and then pull Ivanov to the bench for the extra attacker for the final 2:15 of the game. Flint’s defense staved off the attack with more help from Cranley, hanging on for the 5-4 victory. Final shots ended at 42-33 and faceoffs went 39-26, both to the Birds’ advantage. On special teams, Flint scored two power-play goals on five chances while limiting the Greyhounds to one goal on two opportunities with the man advantage.

Next Up: The Firebirds will be back in action on home ice Saturday as they host the Peterborough Petes for Military Appreciation Night, sponsored by Dort Financial Credit Union, the DM Burr Group, and The View Newspaper Group. All United States Military Veterans and Active Duty members will receive a FREE ticket to the game, courtesy of the event sponsors. A valid ID or credentials are required to receive your FREE ticket. Puck drop is set for 7:00 p.m. (ET) at the Dort Financial Center Saturday evening. Tickets for tomorrow’s contest are available from ETIX HERE.