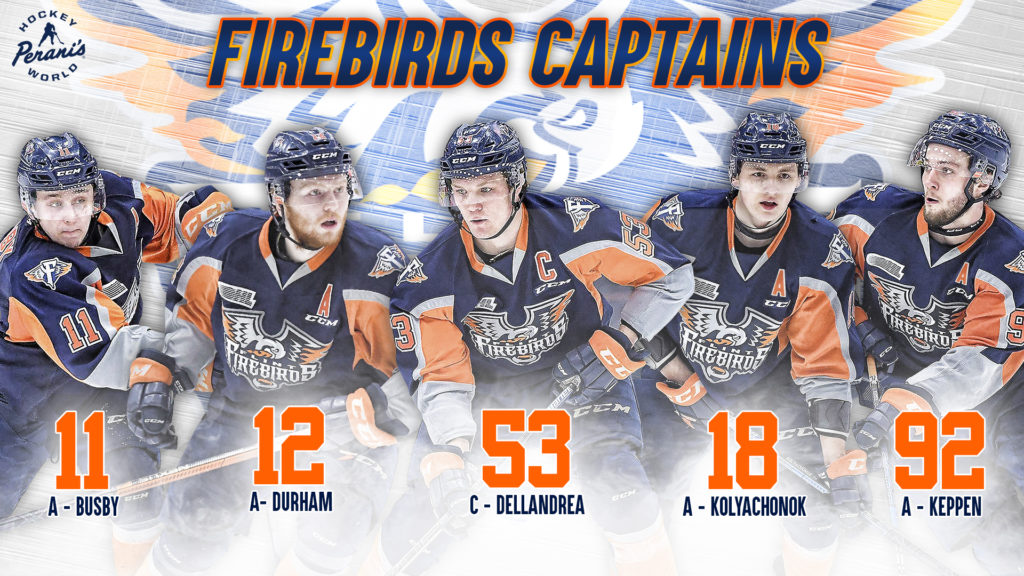 Flint, Mich. – The Flint Firebirds are proud to announce prior to Friday night’s regular season opener against the Sault Ste. Marie Greyhounds the leadership group for the 2019-20 season.

“We are proud and excited to announce our leadership group for the upcoming season,” said Flint Firebirds Vice President of Hockey Operations and General Manager Barclay Branch. “All will provide strong leadership for our hockey club both on and off the ice and will be great representatives of our organization.”

“We feel like we are in a good place as an organization when there are a lot of deserving players of this honor and these decisions are difficult to make,” said Flint Firebirds Head Coach Eric Wellwood. “We have many leaders, both on the ice and in the community, and feel that our leadership group is a strong representation of our hockey club.”

Dellandrea enters his fourth season with Flint and third wearing a letter. He became the first Firebird to be selected in the first-round of an NHL Draft in June of 2018. Dellandrea was selected with the 13th overall pick prior to signing a three-year NHL entry-level contract with the Stars. The Port Perry, Ont. native was the captain for the Firebirds’ last season and is the leading returning point-getter for Flint, recording 63 points (22G, 41A) in 60 games throughout the 2018-19 season. He has played in three NHL preseason games to date in addition to 11 American Hockey League (AHL) games with the Texas Stars.

Busby was also an alternate captain last season for the Firebirds and was selected by the Arizona Coyotes in the fifth-round (145th overall) of the 2018 NHL Draft. Dennis hails from Barrie, Ont. and recorded 14 points (1G, 13A) in a shortened season of just 27 games. Busby played with the Coyotes at the Anaheim Rookie Faceoff this month.

Durham will return as an alternate captain for the second consecutive year. A native of Port Perry, Ont., Durham currently holds the franchise record for 192 consecutive games played after tallying the second most points on the team a season ago, notching a career-high 59 points (35G, 24A) in 68 games. Durham played with the NHL’s Columbus Blue Jackets at the NHL Prospects Tournament in Traverse City this fall.

Keppen enters his third season in the OHL, all with Flint and first as a captain. Keppen more than tripled his point-production a season ago, recording 59 points (30G, 29A) in all 68 regular-season games. Keppen was then selected by the Vancouver Canucks in the NHL Draft this past June, playing in his first NHL preseason game with the Canucks Monday.

Kolyachonok will begin his first season as a Firebirds’ captain and second season in the OHL after being selected by the Florida Panthers in the second-round of the NHL Draft this past June, making him the second-highest Flint Firebird ever to be picked in the NHL Draft. The Minsk, Belarus native tallied 29 points (4G, 25A) in 53 games last year with Flint.

There have been three captains in Flint Firebirds’ franchise history: Dellandrea joins then Dallas Stars’ prospect Alex Peters and Arizona Coyotes’ prospect Jalen Smereck in the five-year history of captains of the Flint Firebirds Hockey Club.