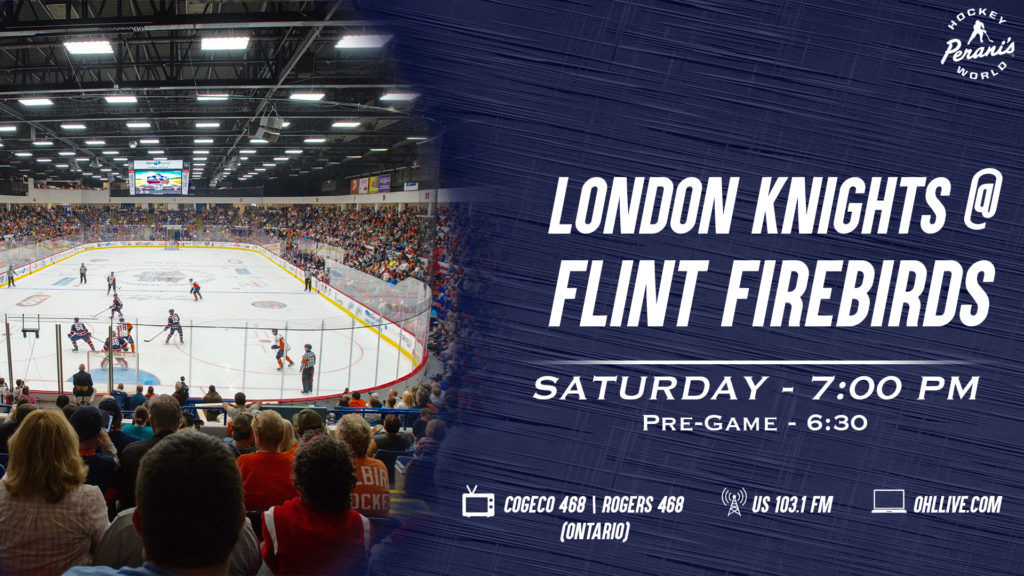 Flint, Mich. – The Firebirds will host the London Knights for the first time this season Saturday night. Puck drop is set for 7:00 p.m. (ET) at the Dort Federal Credit Union Event Center (cap. 4,400) in Flint.

Friday marks the second of four meetings between the two clubs this season, and the first of two games in Flint. All-time, Flint holds a record of 2-13-1-1 in the series, and a record of 1-6-0-1 on home ice. The last time these teams played was November 6, when the ‘Birds earned their first-ever victory at the sold-out Budweiser Gardens in London by a 6 – 1 score. Luke Cavallin played a stellar in net, stopping 35 of London’s 36 shots to earn his fifth win. Dennis Busby (Arizona Coyotes), Jack Phibbs, Ty Dellandrea (Dallas Stars) and Jake Durham each lit the lamp once for Flint and Evgeniy Oksentyuk scored twice plus picked up an assist to earn ‘First Star’ honors in the triumph.

On special teams, the Knights rank second on the power play, scoring on 33.3% of their opportunities. Flint has scored on 15.1% of their chances with the man-advantage. London has the league’s best penalty kill (PK), shutting the opposition down 85.1% of the time. The Firebirds are killing penalties at a 77.4% clip, which ranks 10th in the OHL. The Firebirds have the second-best PK on home ice this season, operating at an 86.0% rate of success.

Promotions:
Saturday, the Firebirds host the London Knights for the club’s fifth-annual ‘Teddy Bear Toss’ Night. Fans are encouraged to bring new or gently used teddy bears or stuffed animals to the game and after the Firebirds score their first goal, fans can launch them onto the ice. There will also be Flint-made Teddy bears available to purchase for $10 on the Dort Federal Event Center concourse. All proceeds will benefit the Teddy Bear Patrol of Genesee County and St. Luke’s North End Woman’s Life (N.E.W.) Center, while supplies last.  The stuffed animals will be collected and donated to Hurley Children’s Hospital – Children’s Miracle Network, Whaley Children’s Center, Michigan State Police and other the various local charities throughout Flint & Genesee County. Last year, the Firebirds donated more than 1,000 stuffed animals to the local charities. Fans are asked to bring and throw their stuffed animals in bags so that they stay dry and safe for the kids. Additionally, the first 800 fans through the doors will receive a Firebirds’ branded Christmas ornament, compliments of PFCU.

Flint Firebirds (15-9-0-0, 4th Western Conference):
Evgeniy Oksentyuk continues to lead the Firebirds in scoring. He has 13 goals and 18 assists for 31 total points through 24 games-played, and he’s on a six-game point-streak (5G, 7A). Team captain Ty Dellandrea (Dallas Stars) has 11 goals and 15 helpers for 24 points in 22 games. Defenseman Riley McCourt ranks third on the team and leads the defensive troops with nine goals and 16 assists for 25 points through 24 games. His 25 points are tied for the sixth-most of any defender in the OHL His nine goals are tied for second-most, and his 16 assists have him tied for seventh in the same category. On Monday, McCourt was named the OHL ‘On the Run’ Player of the Week with eight points (3G, 5A) over three games.

Jake Durham also has 11 goals, and he has 13 assists for a total of 24 points in 24 games. He is currently fourth in total goals-scored by any Flint player at 64, which is only three behind former-Firebird Nick Caamano in third with 67.

Brennan Othmann leads all first-year players for the ‘Birds with 11 total points, which have him tied for the eighth-most points by any rookie in the league. His five goals are tied for seventh.

Between the pipes, Anthony Popovich carries a goals-against average (GAA) of 3.65 GAA and the seventh-best save-percentage (SAV%) at .895. His nine wins are tied for seventh-most in the OHL this season. Luke Cavallin carries a 3.77 GAA with a .896 SAV%.

London Knights (15-5-1-1, 3rd Western Conference):
Connor McMichael (Washington Capitals) leads the Knights on the scoresheet and ranks in the top five in the OHL in several categories. His 53 points are tied for second-most in the league, his 24 goals are second-most, he’s fifth with 29 assists, he’s first with nine power-play tallies, and he’s tied for second with 13 power-play helpers. McMichael enters Saturday night’s game on an impressive 15-game point streak (15G, 22A).

Jonathan Gruden (Ottawa Senators) ranks second on the club with 28 points (9G, 19A) through 22 games. Gruden’s 11-game point streak (5G, 13A) came to an end last night. Defenseman Ryan Merkley (San Jose Sharks) ranks third on the roster and leads the London defense with 27 points (6G, 20A) in 20 contests. His 27 points are fourth among the league’s rearguards and his 21 helpers are fourth-most.

First-year forward Kirill Steklov tops the freshman class with one goal and two assists for three points in 21 games.

Between the pipes, first-year netminder Brett Brochu has played in 11 contests and earned seven victories. He carries a goals-against average (GAA) of 2.91 and a save-percentage (SAV%) of .895. Dylan Myskiw has seven wins in eight appearances this season, and sports a 2.30 GAA with a .924 SAV%.

Broadcast Coverage:
Saturday evening’s contest can be heard live on the radio throughout Flint & Mid-Michigan on US 103.1 FM, online at www.us103.com or by downloading the US 103 app here. Firebirds’ broadcaster Dominic Hennig will call the play-by-play action on the Flint Firebirds Hockey Radio Network. Pregame coverage will begin 30 minutes prior to puck drop at 6:30 p.m.

Next Home Game:
Sunday, the Firebirds welcome the Sarnia Sting for Santa’s ‘Family “FUN”day.’ Come enjoy the holiday spirit and get a free picture taken with Santa Claus, his elves and real-life reindeer from 1-3 p.m. There will also be a DIY ornament designing station, while supplies last. Every Sunday Firebirds’ home game is a Family “FUN”day featuring up to 2 free kids tickets with the purchase of an adult ticket, as well as a post-game ‘skate with Firebirds players,’ and an autograph signing session with Firebirds players following the game.

Give the gift of Firebirds Hockey this year! At all Firebirds home games this week, the club is offering 2 holiday-special packages featuring 2 Gold Level flex vouchers and a $20 gift certificate to The Birds Nest for $40 or 2 Silver Level Tickets vs. the Saginaw Spirit on both Jan. 10 and Mar. 18, including an additional 2 Silver Level flex vouchers for $60. Fans can stop in Friday for the Firebirds’ Black Friday sale featuring 25% off in ‘The Birds Nest” merchandise store! (excluding jerseys and game used items)