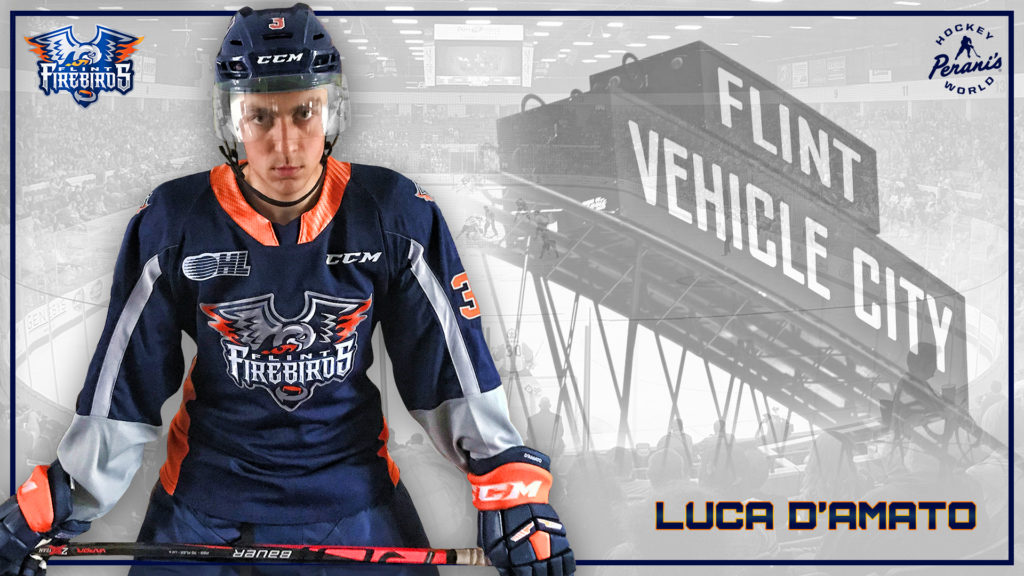 “We are happy to announce that Luca and his family have committed to Flint,” said Flint Firebirds Vice President of Hockey Operations and General Manager Barclay Branch. “Luca is a dynamic player that works hard and is a fierce competitor. He likes to push the pace of the game and is an all-around skilled defenseman. We look forward to having Luca in the Firebirds organization moving forward.”

D’Amato, a native of Maple, Ont., was selected by the Firebirds in the fifth-round (86th overall) of the 2020 OHL Priority Selection and becomes the fifth player to already commit to Flint this offseason. The 5-foot-8, 145-pound right defenseman recorded 24 points (10G, 14A) in just 36 games with the Vaughan Kings Minor Midget AAA Hockey Club, en-route to leading the Kings as finalists in the prestigious Greater Toronto Hockey League (GTHL). Also recognized as a leader, D’Amato was voted as Vaughan’s assistant captain during the 2018-19 season.

“From the start of my hockey career, I’ve always wanted to play in the OHL,” said D’Amato. “It’s an honor to sign with a first-class organization like Flint. Everyone has been so welcoming and supportive. I’m looking forward to arriving in Flint and getting to work.”

D’Amato’s older brother, Daniel, currently plays in the OHL for the Erie (Penn.) Otters. Luca will wear number 3 for the Firebirds.