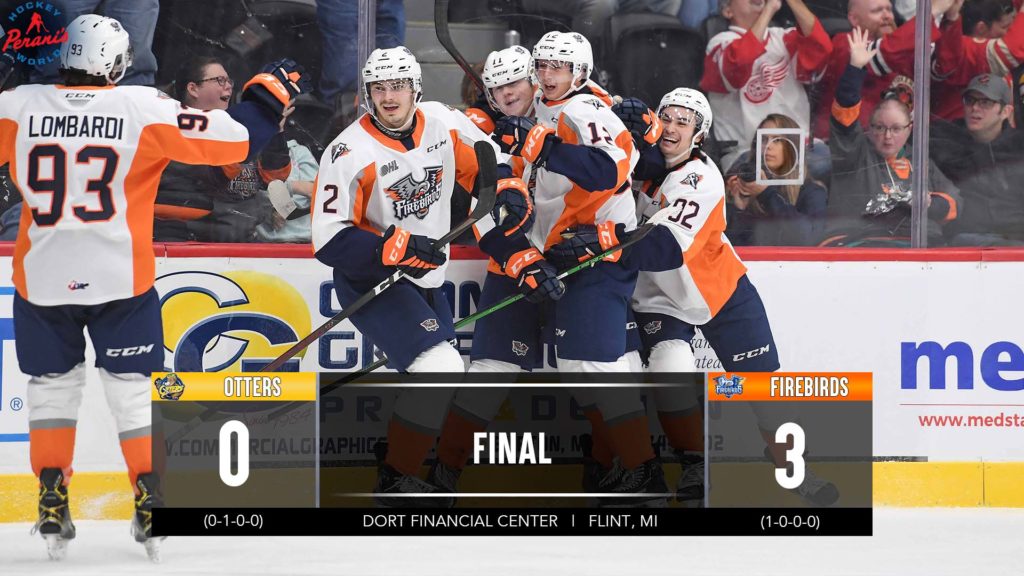 Flint, Mich. – The Flint Firebirds launched the 2021-22 season with a 3-0 triumph in front of a spirited crowd at the Dort Financial Center Saturday night. Braeden Kressler (Toronto Maple Leafs), first-year forward Coulson Pitre, and Brennan Othmann (New York Rangers) found paydirt for the home team. Between the pipes, Luke Cavallin played one of the best games of his OHL career, blanking the Otters on 35 shots for his first career shutout and first-star honors. It was Cavallin’s first career OHL shutout in his 88th career game. Kressler was named the game’s third star, with Othmann picking up second-star accolades. Three stars are brought to you by Ascension Genesys Health Club. On special teams, Flint killed all four of their penalties successfully, including a lengthy five-on-three, but came up empty on two chances with the man advantage.

The clubs remained scoreless through the opening 20 minutes. Flint’s veteran netminder Luke Cavallin faced nine shots-on-goal and made all nine saves. Nolan LaLonde, the younger brother of former Firebirds’ defenseman Owen LaLonde, blanked the ‘Birds on all eight shots. Flint received the lone power-play opportunity of the first period but were unable to convert.

With just over two minutes remaining in the middle stanza, and while shorthanded, Braeden Kressler blocked an Erie power-play shot at the point. He gathered the loose puck in the neutral zone and streaked up the left-wing boards. Ethan Hay emerged up center ice to create a two-on-one opportunity. Kressler maintained possession and lifted a wrister that found twine top-shelf, blocker side on LaLonde at 17:59, unassisted. Second-period shots were 14-13 in favor of the Firebirds.

Moments later, a penalty shot was awarded to the Firebirds. Brennan Othmann (New York Rangers) skated up the right-wing side before crossing in front of LaLonde’s crease. He showed patience and waited for the goalie to commit before backhanding the puck far-side down low. The penalty-shot goal was logged at 6:56.

Final shots were 35 for the Otters and 24 for the Firebirds.

Next Home Game: The Firebirds and Otters will face off again Thursday, October 14 with puck-drop slated for 7:00 p.m. (ET). Tickets are on sale NOW here: ETIX.