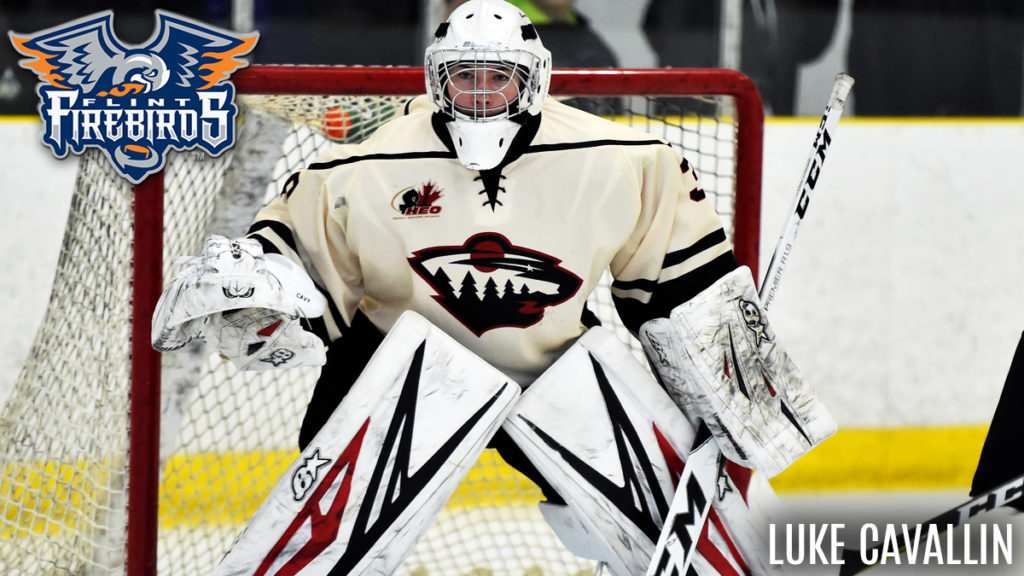 Flint, Mich. – The Flint Firebirds announced today that Luke Cavallin, the highest goaltender selected in the 2017 OHL Priority Selection, has committed to an Ontario Hockey League Standard Player Agreement and education package with the Firebirds.

“We are very happy about adding Luke to our organization,” said Flint Firebirds General Manager Barclay Branch. “Luke is very mature for his age, is a student of the position that is focused, dialed in and committed to the game both on and off the ice. He will be a key member of our club moving forward.”

Cavallin was highly touted as the best goaltender in the 2017 OHL Draft, being selected by the Firebirds in the second-round, 28th overall. The six-foot, 170-pound netminder recorded an impressive 2.22 goals against average (GAA) including a .920 save percentage (SAV%) in 25 games played with the Kemptville 73’s AAA Hockey Club last season. In playoffs with the 73’s, he posted a 1.41 GAA and a .952 SAV%.

“This has been an unbelievable experience and I am very excited to get started,” said Cavallin. “There have been a lot of people that helped me to get to this point that I am grateful for. Meeting the staff in Flint was a great experience, the facilities are really nice and I’m happy to have the chance to play there. I always watched OHL games on TV growing up and found it was great hockey. I couldn’t be more thankful for the opportunity.”

Luke was also among seven of the top Under-17 netminders with ties to the OHL that were selected to attend Canada’s Program of Excellence goaltending camp June 9-11 at Olympic Park in Calgary, Alta.

The 2017 OHL Priority Selection was held Saturday, Apr. 8. North American players that reside in the province of Ontario, the states of Michigan, Pennsylvania and New York and other designated U.S. states east of the Mississippi River born January 1, 1998 through December 31, 2001 were eligible for selection through a 15-round process.

Season ticket packages for the Flint Firebirds 2017-18 season are on sale now and can be purchased at the Dort Federal Event Center Box Office, Monday thru Friday from 9 a.m. to 5 p.m. (ET). Season ticket holders receive FREE parking this season. For ticket information, contact Kevin Mays, Director of Ticket Sales at (810) 201-6903 or kevin@flintfirebirds.com.