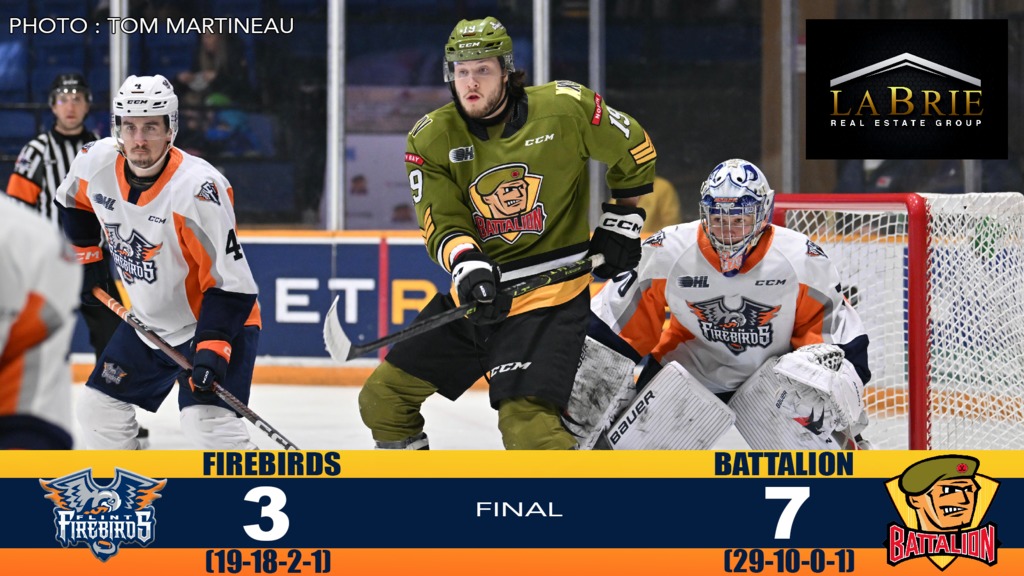 North Bay, Ont. – Coulson Pitre scored two power-play goals 43 seconds apart and Nolan Dann picked up three points (1 G, 2 A) in his third game with Flint Sunday afternoon. The North Bay Battalion countered with three power-play goals plus a shorthanded tally. Then Kyle McDonald logged a rare natural hat trick in the third period to keep the Firebirds out of contention in the eventual 7-3 North Bay victory. Will Cranley backstopped the Firebirds, making 30 saves on 37 shots. The OHL’s winningest goaltender Dom Divincentiis defended the goal for the Battalion, earning his 20th win by turning aside a season-high 47 of 50 shots faced.

After a few minutes of mostly defensive hockey, the Battalion went on the game’s first power play. Avery Winslow was down low in the right corner and fed Dalyn Wakely along the near half wall. Wakely made a short pass to Anthony Romani atop the right circle for a quick-release one-timer that went just inside the far post for his 12th of the season at 4:47.

The Firebirds went on their first power play a few minutes later, but North Bay’s top-ranked penalty kill unit potted a shorthanded marker to take an early two-goal lead. Nikita Tarasevich blocked a pass attempt from the right point in his defensive end and won the foot race to the loose puck in the neutral zone. As he skated in alone on Cranley, he faked a glove-side shot and immediately sent the puck low to the blocker side for his 11th of the season at 8:40.

With a little less than five minutes remaining in the first period, Gavin Hayes skated up the right side of the neutral zone and flipped a pass to Braeden Kressler as he crossed the offensive blue line. Kressler maintained possession until low into the right circle before looping the puck back to between the circles. That’s where the newest Firebirds’ skater Nolan Dann jumped on it and sent it high to the glove side for his seventh of the season at 15:16.

First-period shots favored Flint 15-12, and the Birds outdrew the Battalion by one 13-12. While the Firebirds went scoreless in two power-play chances, North Bay went converted on their lone opportunity.

A member of the Battalion took a four-minute double minor early in the middle frame, and Coulson Pitre and the Firebirds made them pay for it. Near the end of the first two minutes, Nolan Dann’s slap-pass into the slot was deflected high over Divincentiis‘ left shoulder for his 16th at 3:45. Dann combined with Dmitry Kuzmin for the assists. Then, during the latter two-minute minor to North Bay, Dann made a cross-ice pass from the left half-boards to Pitre atop the right circle. Pitre’s snapshot found twine for his second power-play tally at 4:28 to give Flint the first lead of the night. The second assist was credited to Tristan Bertucci.

From there, the Battalion fought back and scored two power-play tallies of their own. First, Ty Nelson pinched in from the right point to one-time a pass short side up high for his 13th at 14:00. Kyle Jackson and Kyle McDonald combined for the helpers. Then at 17:06, it was Nelson backhanding a deceiving wide-angle shot from the bottom of the left circle that found the five-hole for his 14th, assisted by Josh Bloom and Matvey Petrov.

The Firebirds trailed by a goal through 40 minutes. Flint had more shots on goal by a 17-13 margin in the center stanza, and faceoffs were controlled by North Bay by a variance of 9-5. Both teams scored twice with the man advantage, with Flint going a perfect 2-for-2 and the Battalion scoring twice on four power plays.

North Bay extended their lead to a pair quickly to start the third, needing only 36 seconds. Bloom cycled the puck around the boards from the right-wing wall to the space behind Cranley. Jackson won a brief battle along the end boards and made a no-look pass to the left side of the slot. Kyle McDonald was positioned to quickly one-time the puck far-side for his 14th of the season.

McDonald then carried up the right side on a three-on-two rush for the Battalion just beyond four minutes into the final frame. He opted to shoot from a wide angle below the circle, but instead of getting the far-side rebound to his teammate, he ended up recording his second of the period through the five-hole at 14:11. Bloom was credited with the lone helper.

Inside the final five minutes, Kyle Jackson won an offensive-zone faceoff back to McDonald near the top of the right circle. McDonald settled the puck, snapped it into traffic, and netted his hat-trick marker at 15:14.

Final shots were 50 for the Firebirds and 37 for the Battalion. North Bay outdrew the Birds 34-28 through 60 minutes. In a busy night for special teams, Flint scored twice on four power-play opportunities against the OHL’s top-ranked penalty kill unit but allowed three power-play goals and one shorthanded marker while the Troops had six chances with the man advantage.