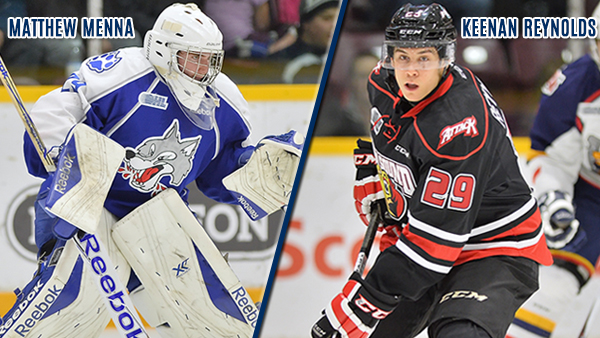 Flint, Mich. – The Flint Firebirds have acquired Matthew Menna from the Sudbury Wolves and Keenan Reynolds from the Owen Sound Attack.

Menna, a native of Aurora, Ont., was drafted in the seventh round of the 2014 OHL Priority Selection by Sudbury. In 10 games with the Wolves this season, he recorded a 4.77 GAA and a .860 SV%. The Firebirds traded a seventh round pick in 2017 to Sudbury in return.

“I’m really excited for the opportunity to become part of a young group here in Flint,” said Menna. It seems really great here and the guys all seem positive in the dressing room.”

“I’ve been following the team since Plymouth made the transition to Flint and the organization has seemed first class from the beginning,” said Reynolds. “I’m excited to come in and contribute. Hopefully here, I can get back to my game and become a big point producer and get the fans into my style of play.”

The Firebirds will return home to the Dort Federal Event Center Saturday, Jan. 23 against the Windsor Spitfires. Puck drop is set for 7:30 p.m. (EST). All Flint Firebirds home games in the month of January are “Food Drive” games where fans can bring in five canned or boxed food items and receive $5 off a silver ticket.