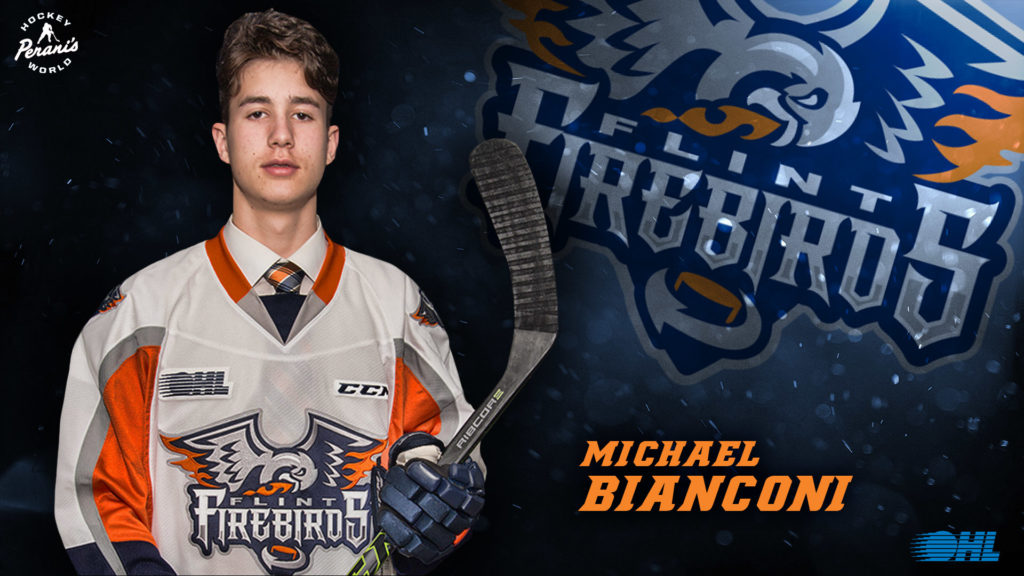 “We are happy to announce that Michael and his family have committed to the Flint Firebirds,” said Flint Firebirds Vice President of Hockey Operations & General Manager Barclay Branch. “Michael is a talented hockey player who plays the game with speed, skill and competitiveness. He will be a big part of our success moving forward.”

Bianconi averaged a point-per-game at the 2018 OHL Cup in March, scoring three times and adding four assists for seven points. He led all players in the showcase with a plus/minus rating of plus-15, playing an integral role in helping the Canadiens secure the OHL Cup championship. Bianconi was one of only six players named to the OHL Cup All-Star Team, along with new Firebirds’ teammate Evan Vierling.

“Since day one, Barclay Branch, Coach Ryan [Oulahen] and the whole Flint Firebirds’ organization have been nothing but professional,” said Bianconi. “I’m excited to start the next chapter of my hockey career with the Firebirds. I look forward to helping Flint build towards a championship program.”

Bianconi also played one game with the Toronto Patriots (Jr. A) Hockey Club in the Ontario Junior Hockey League (OJHL) last season. He will arrive in Flint for training camp in late August and will wear number 8 for the Firebirds.

HockeyProspect.com Scouting Report: Bianconi is an intelligent, smooth skating defender with two-way attributes. Michael shows impressive poise in possession and plays a mature game. A player who possesses a fluid straight-line stride and strong mobility, Bianconi utilizes his skating to elevate his game on both sides of the puck.

The Firebirds’ training camp will take place Monday, Aug. 27 through Wednesday, Aug. 29. The camp will be held at the Firebirds’ official practice facility, Iceland Arenas, and is open to the public with free admission for all on-ice sessions. Stay tuned to www.FlintFirebirds.com for more information.