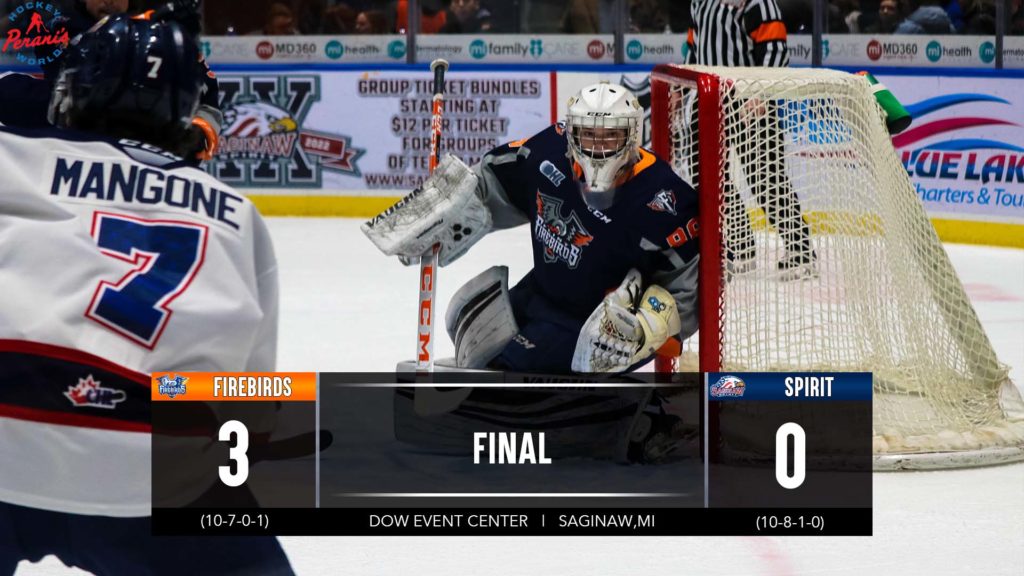 Saginaw, Mich. – The Firebirds edged closer to evening the I-75 Divide Cup rivalry series, presented by Coors Light, with a 3-0 road win over the Saginaw Spirit Thursday night. Between the pipes, Flint’s Ian Michelone, playing in just his third OHL game, made all 32 saves to pick up his first career shutout in the OHL. The Birds’ top-scoring rookie Coulson Pitre lit the lamp again for his sixth of the campaign. Veteran Riley Piercey also potted his fourth, and Braeden Kressler (Toronto Maple Leafs) found the empty net for his fourth of the season. Across the ice veteran netminder Tristan Lennox (New York Islanders) made 21 saves on 23 shots in his ninth game of the season. With the victory, the I-75 Divide Cup Series now sits at 3-2, with Saginaw being up one game.

Coulson Pitre scored the first goal of the night. He carried up the right-wing boards from the neutral zone to the right circle, and made a nice pass across the high slot to Pitre inside the left-wing circle. With his defender in tow, Pitre was able to lift a backhander mid-height to the near side for his sixth of the season at the 7:55 mark. Pitters earned the lone assist on the play.

First-period shots ended 11-10 to Flint’s advantage. Faceoffs were even at eight per side. Neither team took a penalty to test special teams.

The second goal of the game was a textbook wrap-around goal by Riley Piercey in the second. First-year defender Tristan Bertucci made the breakout pass from his defensive end to Piercey rocketing up the left-wing side. Piercey carried in from the left-wing boards and made his way behind the Saginaw cage. From the far side, he slid the puck under Lennox for his fourth of the campaign at 2:50 of the middle frame.

The Birds headed to the locker room after 40 minutes of play with the the 2-0 lead in the game. Face-offs in the second period ended 11-9 in favor of the Spirit. Total face-offs were 21-20 in total to Saginaw’s advantage. Both teams were 0-for-1 with man-advantage in the middle frame.

The rookie Flint netminder Michelone was tested often in the third period, especially during the Spirit’s four-minute power play. He stood his ground and maintained his squad’s lead. Saginaw pulled Lennox for the extra attacker with north of three minutes remaining in regulation. Braeden Kressler capitalized and scored from the neutral zone to put the game away at 3-0.

Final shots were 32-24 in favor of the Spirit. Face-offs also favored the home team 31-23, On special teams, Flint was scoreless on one power-play opportunity, while killing off three penalties successfully. The Firebirds are set to take the ice this weekend in Owen Sound on Saturday at 7:30 p.m. (ET) and Sunday at 2:00 p.m.

Next Home Game: The Firebirds return to home ice Wednesday, December 8 to host the Erie Otters. Puck drop is scheduled for 7 p.m. (ET) at the Dort Financial Center. Tickets are on sale NOW here: ETIX.