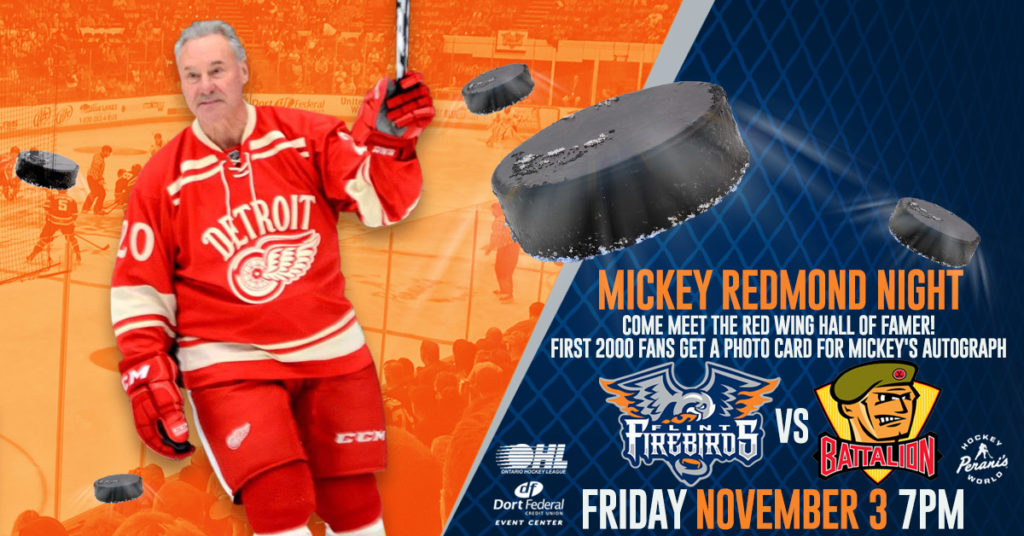 Flint, Mich. – The Flint Firebirds return home to the Dort Federal Event Center this Friday, Nov. 3 to host the North Bay Battalion and fans will be treated to a special guest appearance from Mickey Redmond, a former player and now TV Analyst on FOX Sports Detroit for the Detroit Red Wings. The First 2,000 fans through the door will receive a free Mickey Redmond autograph card.

NHL Hall of Famer, Redmond, a two-time 50-goal scorer for the Red Wings will be in attendance for an autograph session on the arena concourse from 6-7:30 p.m. The autograph session is available to all fans with a suggested $5 donation to the Firebirds Charitable Foundation.

Mickey Redmond played for the Montreal Canadiens from 1967-71, winning Stanley Cups in 1968 and 1969. In 1972-73, Redmond became the seventh player in NHL history and the first Red Wing player to score 50 goals in a season. He then became only the third player to achieve back-to-back 50-goal seasons 51 scored during the 1973-74 season.

A native of Kirkland Lake, Ont., Redmond played in the Ontario Hockey League from 1963-67 with the Peterborough Petes organization. He amassed 268 points (136G, 132A) in 201 games before playing his first season in the NHL in 1967.

Along with Nick Caamano (Dallas Stars), Fedor Gordeev & Nick Mattinen (Toronto Maple Leafs) being three Firebirds that have been drafted into the NHL, the Battalion also have three players that have NHL ties as well, including Riley Bruce (Calgary Flames), Cam Dineen (Arizona Coyotes) and Brett McKenzie (Vancouver Canucks). Additionally, Flint’s Dennis Busby, Ty Dellandrea and Hunter Holmes have been tabbed by NHL Central Scouting’s “Players to Watch List” for the upcoming NHL Draft in June.

Single game tickets for the Flint Firebirds 2017-18 season are $12 for Bronze, $16 for Silver, $20 for Gold and $26 for VIP seating. All seats are reserved / assigned seating. Fans can purchase tickets at the Dort Federal Event Center Box Office and online at ticketmaster.com. For ticket information, flex tickets or group outings, contact Dominic Gutierrez at (810) 701-8536 or domg@flintfirebirds.com. To book a private suite, please contact Karla Turner at (810) 744-0580 ext. 213 or email karla@flintfirebirds.com.