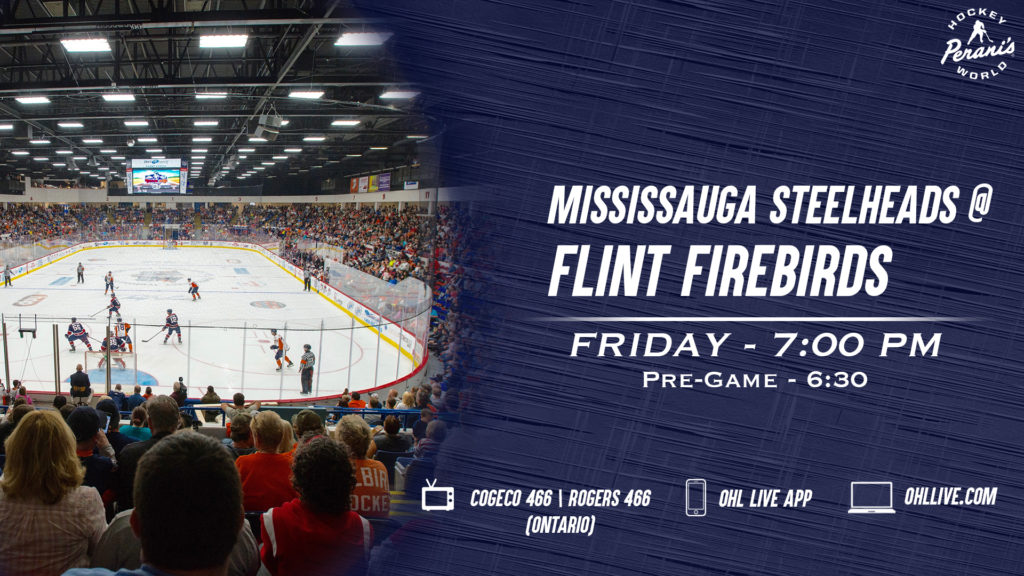 Despite dropping their past two games, the Firebirds are off to their best start in franchise history, posting a 10-5-0-0 record thus far which has them second in the West Division and third in the Western Conference. The Firebirds also hold one of the league’s best home records, going 6-1-0-0 on home ice.

Firebirds’ captain Ty Dellandrea (Dallas Stars) and Mississauga Steelheads defenseman Thomas Harley (Dallas Stars) both represented Team OHL in the CIBC Canada Russia Series Thursday in Kitchener, Ont. (Watch Highlights). The Firebirds are still without forwards Brennan Othmann and Braeden Kressler, while Mississauga is without Ethan Del Mastro who all are still representing Canada at the World Under 17 Hockey Challenge.

Friday night marks the first of two regular-season meetings between these clubs this campaign, and the only time they’ll meet in Flint. All-time, the Firebirds hold a record of 2-5-0-1 in games against the Steelheads. The ‘Birds are 1-3-0-0 in the series on home ice. Last season Flint finished with an overall record of 0-2-0-0 versus the Fish.

Mississauga enters Saturday’s tilt with a season record of 5-10-0-0. The Steelheads are 2-4-0-0 in road games. Last Saturday night, Flint dropped a 5 – 1 decision to the Barrie Colts in their first defeat in Flint. Mississauga defeated the Niagara IceDogs in St. Catharines, Ont. by a score of 4 – 2 on Saturday.

The last time these teams met was January 18 in Mississauga. Flint’s Jack Wismer led the ‘Birds with two goals, and Vladislav Kolyachonok (Florida Panthers), Emmet Pierce and Evan Vierling each found the back of the net. Ethan Keppen (Vancouver Canucks) and Hunter Holmes each picked up two assists, as well. It was the ‘Fish,’ however, who earned an 8-5 victory that night. James Hardie scored twice to lead the Steelheads on the scoresheet.

On special teams this season, the Firebirds are converting on the power play at a rate of 13.3%. The Steelheads rank 18th in the OHL, scoring at a 17.7% clip. Mississauga is killing penalties at a rate of 70.6%, which is 17th-best in the OHL. Flint’s penalty-killers rank 15th at a 73.7% efficiency.

Friday also marks the second of the ‘Firebirds 4 Pack Fridays! Fans can get 4 tickets, 4 hot dogs and 4 soft drinks starting at just $60.

Flint Firebirds (10-5-0-0, T-2nd West Division, T-2nd Western Conference):
Evgeniy Oksentyuk continues to lead the way for Flint with seven goals and a team-leading 11 assists for 18 points through 15 contests. Ty Dellandrea (Dallas Stars) is on a three-game point-streak, has points in 11 of 13 games this season, racking up seven goals and 10 helpers for 17 total points. Defenseman Riley McCourt is averaging nearly a point per game with four goals and ten assists in 15 games-played, ranking the rearguard third on Flint’s scoresheet. His 14 total points are tied for tenth-most among all defensemen, and his four goals are tied for ninth-most in a group that includes fellow Firebird blue-liner Vladislav Kolyachonok (Florida Panthers). McCourt also ranks 12th in the OHL with his .93 points-per-game average.

Jake Durham leads Flint in goals with eight, plus has five assists for 13 total points. Durham has the chance to become the Firebirds’ all-time games-played leader with 218 games as a Flint Firebird. Durham also holds the current record for most consecutive games played, not missing a game through 207 straight. Hakon Nilsen currently holds the title with 217 games-played. Third-year forward Jack Wismer is slated to play his 150th career regular-season game with the ‘Birds on Friday night, also.

Between the pipes, Anthony Popovich has played in 10 games this season. His seven victories are tied for fifth-most in the OHL. He also ranks 13th among OHL goaltenders with a save-percentage (SAV%) of .903, and 13th in goals-against average (GAA) at 3.34. Luke Cavallin now has three wins in six appearances, and he carries a 4.09 GAA with a .890 SAV%.

Mississauga (5-10-0-0, 4th Central Division, 8th Eastern Conference):
Defenseman Thomas Harley (Dallas Stars) has played in 13 games this season and leads the Steelheads in goals with eight, which is the most by any rearguard in the OHL. He has a total of 18 points, which ranks him fifth on the defensive list. Harley’s averaging 1.38 points per game, which is the third highest average among the league’s blue-liners. Cole Schwindt (Florida Panthers) has played in 15 games and ranks second in scoring with three goals and nine helpers for 12 points. Richard Whittaker sits third on the stat sheet with 11 total points (4G, 7A).

First-year defenseman Ole Bjogvik-Holm has seven assists, which ranks fifth among rookies in the league. The seven points have him leading the freshman class for the Fish.

Goaltender Kai Edmonds played for the Barrie Colts the last two seasons. Since joining Mississauga, he’s appeared in 12 games and earned four victories. He carries the OHL’s 16th-best goals-against average (GAA) of 3.60 and the 16th-best save-percentage (SAV%) of .883. Second-year netminder Joe Ranger has three appearances with one win. He has a GAA of 6.04 and a SAV% of .830.

Broadcast Coverage:
Friday evening’s contest against Mississauga cannot be heard on the radio as it is one-of-six conflicts on the 68-game schedule. However, Firebirds’ broadcaster Dominic Hennig will call the TV play-by-play action on the Firebirds Hockey Network (FHN). Pregame coverage will begin 30 minutes prior to puck drop at 6:30 p.m. New this season, fans can watch the FHN TV Pregame Show live on Facebook and Twitter, also beginning at 6:30 p.m.