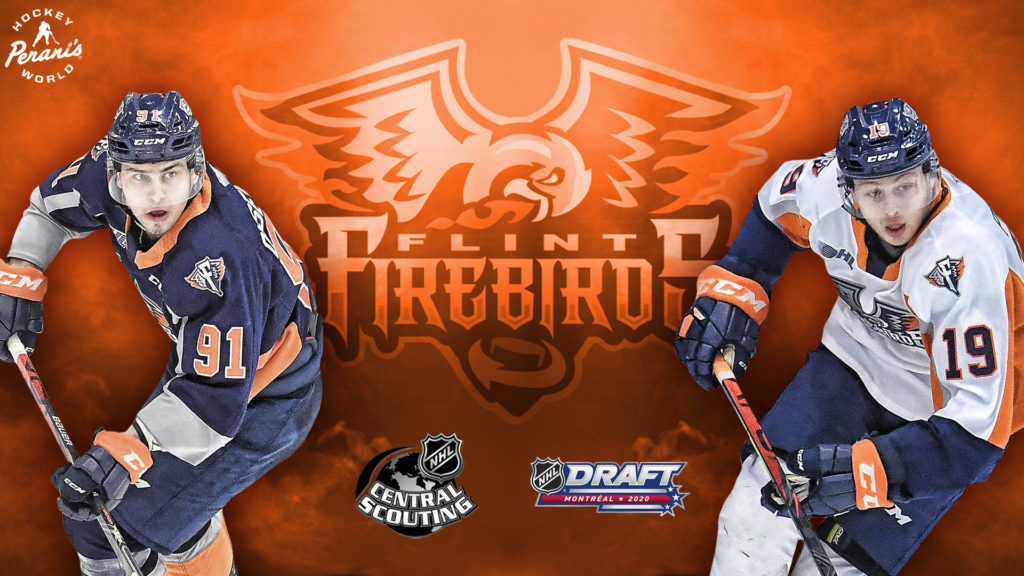 Toronto, ON – The Ontario Hockey League today announced that 57 OHL players have been listed by NHL Central Scouting in their Final Rankings for the 2020 NHL Draft. Flint’s Evgeniy Oksentyuk (#109) and Riley Piercey (#129) are among the players in the Final Rankings.

“It’s a great example of their hard work and commitment level,” said Flint Firebirds Vice President of Hockey Operations & General Manager Barclay Branch. “Coming to play in Flint has proved beneficial to both players and we could not be happier for them.”

Oksentyuk, originally selected by the Firebirds in the first-round (5th overall) of the 2019 CHL Import Draft, led the Firebirds with 78 points (33G, 45A) in 58 games this season. The Brest, Belarus native set a franchise record for the longest point-streak by a single player, recording a point in 17 consecutive games from Nov. 15, 2019 – Jan. 17, 2020.

OHL players account for five of the top 10 ranked North American skaters as well as the top-ranked goaltender on the list in Guelph Storm netminder Nico Daws. Former OHL Rookie of the Year Quinton Byfield of the Sudbury Wolves leads the OHL as the second-ranked skater on the list followed by fellow Canadian National Junior Team gold medalist Jamie Drysdale of the Erie Otters in third. Saginaw Spirit forward Cole Perfetti sits fifth on the list followed by Ottawa 67’s teammates in OHL scoring champion Marco Rossi and 52-goal scorer Jack Quinn in sixth and seventh.

Each of the OHL’s 20 member teams have at least one player on the list, with the Soo Greyhounds (7) leading the way followed by the Erie Otters (6), Kitchener Rangers (4), London Knights (4) and Windsor Spitfires (4).

A total of 57 OHL players were listed in NHL Central Scouting’s Midterm Rankings released in January.