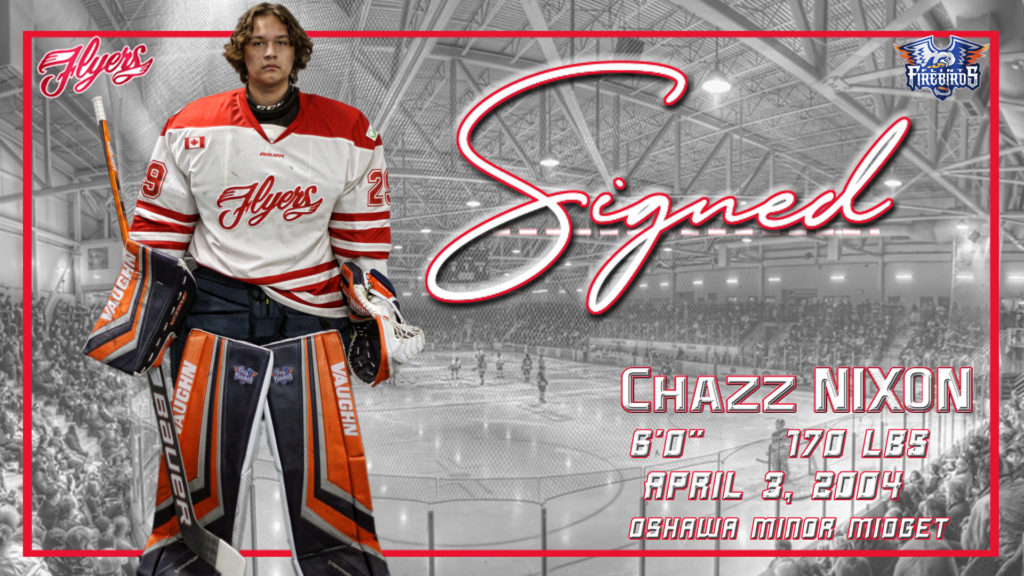 Nixon, a native of Oshawa, Ont., was selected by the Firebirds in the fifth-round (96th overall) of the 2020 OHL Priority Selection in April and committed to an OHL Standard Player Agreement and education package with the Firebirds on May 1, 2020.

“We are thankful to have an affiliate in our system like Leamington to continue to offer our players an excellent development environment,” said Flint Firebirds Vice President of Hockey Operations and General Manager Barclay Branch. “Having three goaltenders in our system now provides us insurance in one of the most critical positions during a long hockey season. We will be in constant discussions with Leamington’s staff and regularly monitoring Chazz’s performance with the Flyers.”

With Nixon’s commitment, the Firebirds now have three signed goaltenders in the system, joining Luke Cavallin and Peyton Grainer.

“We are thankful to the Flint Firebirds, Chazz and his family for trusting our program for his development,” said Leamington Flyers General Manager Justin Solcz. “In recent years, we have had very good success in developing goalies and all the credit goes to our goalie coach Matt Anthony. He is an extremely hard worker who is very detailed and is able to communicate with the goalies on what they need to do to be better both physically and mentally. We are looking forward to developing Chazz to be a successful goalie for Flint and we hope this will be a blueprint for future Flint draft picks.”

The Firebirds announced an affiliation agreement with the Leamington Flyers on June 13, 2019. With the agreement, the Firebirds will be able to assign affiliated players, draft picks and prospects to play and develop in Leamington. The Flint Firebirds play in the Ontario Hockey League (OHL) at the Tier I Junior A / Major Junior level. The Leamington Flyers play in the Greater Ontario Junior Hockey League (GOJHL) at the Junior B level.

Nixon will wear number 33 for Flint and number 29 for Leamington.