Off Night for Flint Leads to Win for the Knights 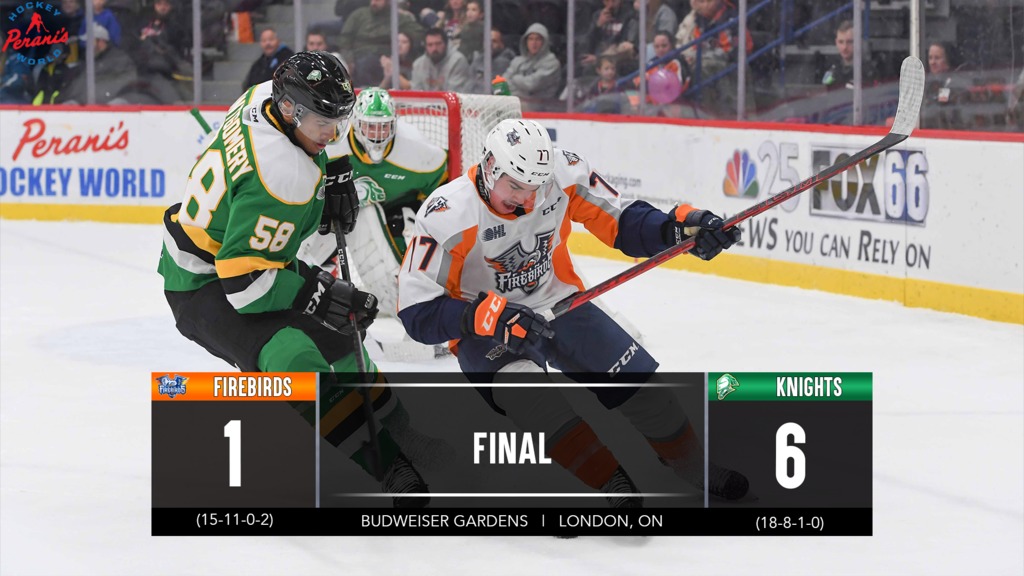 London, Ont. – For the first time this season, the Flint Firebirds hit the road to take on the London Knights in front of 9,000 empty seats under the new health and safety protocols. It was a matchup of two of the top four teams in the Western Conference. Camaryn Baber, Logan Mailloux and Kirill Steklov all made their season debuts for the London Knights, and the second meeting of the year saw the London Knights take care of the Firebirds from the jump. Luke Cavallin got the start in net for Flint, and it was Brett Brochu, fresh off his World Junior Championship appearance for Team Canada, between the pipes for the London Knights.

The Knights struck first. After Kirill Steklov split the defense and got the shot off right in front of Cavallin. Luke Evangelista followed up the rebound off the left pad of Cavallin and found Ruslan Gazizov who put it in the back of the net to give the Knights the 1-0 at the 3:21 mark of the opening frame.

London didn’t take their foot off the gas from there. A harmless shot from the point hit Knights forward Cody Morgan in the slot who stopped, settled it and shot one that just had enough on it to sneak under Cavallin’s glove and trickle in over the goal line. It gave London a 2-0 lead 13:50 into the opening frame.

It didn’t take long for the Knights to add their third. Luke Evangelista picked up his 22nd goal of the year after Gazizov sent one in front from the sideboards that deflected off a stick in front to a wide-open Evangelista on the near post. The 3-0 goal came just 2:28 after the Knights made it 2-0.

The Firebirds received the first man-advantage of the game at the 18:24 mark of the 1st period as Bryce Montgomery sat for holding. The Firebirds were unable to find an answer in the 1st but had 24 seconds of carryover powerplay time to start the 2nd. London outshot the ‘Birds 18-12 in the opening frame and outdrew them 13-10 as well.

Flint was unsuccessful on the carryover powerplay to start the 2nd and shortly after the penalty expired, Logan Mailloux let a shot go from the point that was deflected past Cavallin by Luke Evangelista for his second of the game just 38 seconds into the 2nd Period.

Finally, the Firebirds were able to beat Brochu. The Firebirds forecheck forced a turnover in the offensive end, Riley Piercey then found Tag Bertuzzi who dropped the pass back to the top of the nearside circle. Zack Terry let it fly beating Brochu low blocker-side for his second goal of the year to put the Firebirds on the board 1:17 into the 2nd, making it a 4-1 game.

Flint picked up their second powerplay of the game less than a minute later but were unsuccessful at beating Brochu. At the 5:30 mark of the middle stanza, the ‘Birds picked up another man-advantage opportunity. Once again, the Knight PKers stood the test, despite several Firebird chances, and kept it a 4-1 game at the halfway point of the game.

London received their first powerplay of the game after Tyler Deline sat two minutes for interference at the 11:58 mark of the 2nd. The best PK in the OHL went up against the fifth-best PP and came away with the kill successfully. The teams exchanged unsuccessful powerplays in the minutes following as they combined to go 0-for-6 through the first 40 minutes of play. Flint out-chanced the Knights in the middle frame, despite being outshot 10-9 in the period, but remained trailing by three going into the final 20.

As was the case the entire game, the Knights struck early in the period. Ruslan Gazizov deflected a shot in the high slot from Gerard Keane past Cavallin just over a minute gone into the 3rd period to give London a 4-goal lead again, 5-1.

With Flint on the powerplay, Luke Evangelista stole the puck in the offensive end, spun in the far circle and passed one cross-ice to Gerard Keane who collapsed from the point and wristed one in behind Cavallin to give the Knights a 6-1 lead 4:45 into the 3rd.

The Knights picked up a lengthy 5-on-3 late in the game after Simon Slavicek and Ethan Hay took penalties just 18 seconds apart. However, as was the case all night, the bright spot for the Firebirds was their penalty kill, and they successfully fought off the two-man disadvantage rather easily.

Next Up: The Firebirds continue what is now their longest road trip of the season due to the restructuring of the schedule tomorrow night. They will take on their West Division rival the Sarnia Sting tomorrow night at the Progressive Auto Sales Arena with puck drop set for 7:05 p.m.